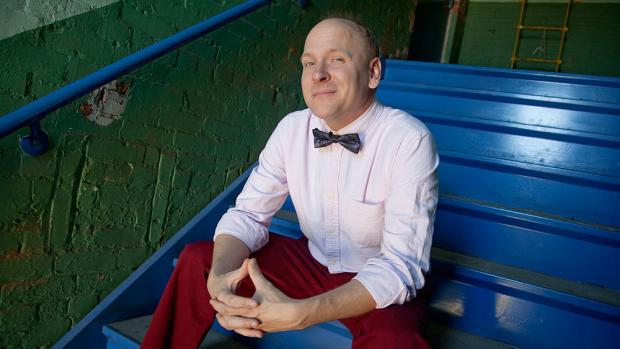 Ray Boucher is one of Buffalo’s go-to actors for a wide range of roles. He’s appeared at Jewish Rep, Alleyway, New Phoenix, Irish Classical Theatre, and Shakespeare in Delaware Park. Lately, he’s most often to be found at Buffalo Laboratory Theatre, for whom he is currently appearing in Build Your Own Adventure: The Mystery of the Silver Chalice by Taylor Doherty at 710 Main. This is an interactive play in which the audience determines the outcome.

Boucher would seem to be a great choice for this playful sort of venture. On stage he can project an impish sense of mischief, and is never afraid to make bold choices.

According to the press fodder, in The Mystery of the Silver Chalice, “Robert has never been very good with the ladies—in fact, he’s borderline pathetic.  But now, thanks to a silver chalice and a magical new friend, Robert might have one last chance at love…but he needs YOUR help!  Using the latest in theatre technology, the audience uses small audience-response remote controls to direct the choices Robert makes throughout the show! Will he pursue the beautiful bombshell, the girl-next-door or the edgy artist? What should he wear on his date? Will you take her to a poetry reading or a nightclub? The audience chooses a hysterically different path each and every night! With eleven possible endings! Can you help Robert make the right choices and win the girl of his dreams? Or will you guide him into romantic disaster?  It’s up to YOU!”

Well, that sounds like fun, but for now, with The Public Questionnaire, it’s up to Ray! (For the record; he doesn’t play Robert. He’s the other guy).

What word would your friends use to describe you?
Smart-aleck (though they don’t use the word “aleck”).

What quality in your current character is most unlike your own personality?
He is 800 years old; I am slightly younger.

What quality in your current role is most like your own personality?
Oh, he’s a bit snarky…and I’m just a bit snarky my own self.

When and where were you the happiest?
In the delivery room as my daughter entered the world.

What is your idea of hell on earth?
Sartre says “Hell is other people…” but that seems a bit mean…so, stuck in a car in a blizzard with Justin Bieber and at least two Kardashians…so, in that case, Sartre was right.

What is your greatest fear?
Oh, the real ones: health and well-being of my family being threatened…and, of course, being stuck in a car with Justin Bieber and two Kardashians.

Which talent do you most wish you had?
The ability to play an instrument…any instrument.

What superpower do you most wish you had?
Omniscience.

What would you change about your appearance?
Maybe taller…maybe hair…maybe taller hair.

What trait do you most dislike in others?
Lack of consideration.

What do you most value in your friends?
An ability to enjoy life.

What quality do you most value in a good director?
Clarity of vision.

What is your guilty pleasure?
Beer, though I’m not that guilty about it.

Who is your favorite fictional hero?
Arthur Dent (Hitchhikers Guide…).

Who is your real-life hero?
My father.

What do you consider to be the most overrated virtue?
Wealth.

On what occasion do you lie?
To avoid inconvenient conversations.

What was the subject of your last Google search?
How to spell “Bieber.”

If you come back in another life, what person or thing would you like to be?
I’d like to be a pterodactyl…that’d show ’em.

What role, in which you will never be cast, is perfect for you?
Willy Wonka.

What is your motto?
“One day you are going to die…but not today.”