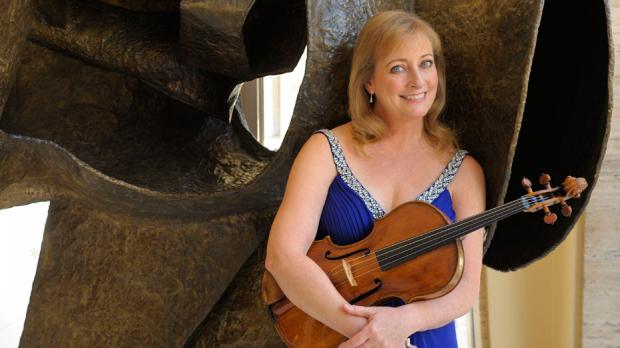 Cynthia Phelps, principal violist of the New York Philharmonic, who performs a recital this Friday, February 5, at 7:30pm in Lippes Concert Hall at UB’s Slee Hall, comes to Buffalo bearing some very important news: The New York Philharmonic has appointed Dutch conductor Jaap van Zweden as its new music director beginning in 2018. “I’m thrilled. I’m a big Jaap fan; he was my first choice,” says Phelps. The New York Philharmonic has the reputation of being a “difficult” orchestra to lead, to which Phelps adds these qualifications: “My colleagues are the greatest anywhere. I feel so lucky every day going to work and to play with these people. It’s New York: You don’t get to that place by being a shrinking violet. It is an orchestra of extremes: There’s extreme personality, extreme talent. It takes [a conductor] who is very strong, very direct but very respectful, who knows whom they are working with. This is a man who can do just that.”

Phelps, who has performed as soloist and chamber musician on three continents, will play two works originally intended for viola—George Enescu’s Concert Piece and Robert Schumann’s Märchenbilder (a kind of musical fairy-tale that he wrote to entertain his children)—and two others that were intended for other instruments that have since gone completely out of fashion. One is the Sonata for Viola da Gamba and Keyboard No. 1 in G Major by J. S. Bach; the other the so-called Arpeggione Sonata in A Minor by Franz Schubert, the name referring to the cello-like but still vastly dissimilar instrument that never caught on. I asked how she approaches adapting her technique to perform works meant for instruments quite different from her own. “In the Bach, I’m not playing on a Baroque instrument obviously and I am playing with piano. For me the idea is to make sure the rhythmic texture is very clear. Now the piano is playing two parts, one in the left hand, one in the right and trade off the fragments of melody between them. I try to showcase that element of the music as well as the harmonic structure.

“In the Arpeggione sonata, the instrument didn’t have a lot of power but it did have a lot of range. Violists and cellists today tend to bring out the melodic flare that Schubert, being a great composer of songs, had in mind.”

What does Cynthia Phelps want her listeners to be open to while she plays? “Viola recitals are not that common. An evening with the viola is not something that is offered that much. People don’t really have an ear for it. ‘What is a viola? Is it bigger than a violin?’ I get that question a lot when I am at the airport carrying my viola on my back. I like to present the instrument as a color. This is the sound world of this instrument. I like to be able to exploit that as much as possible so that people come away thinking, ‘Now that’s a viola! I really like the viola! I’d rather hear the viola over the violin any day of the week,’” she laughs.