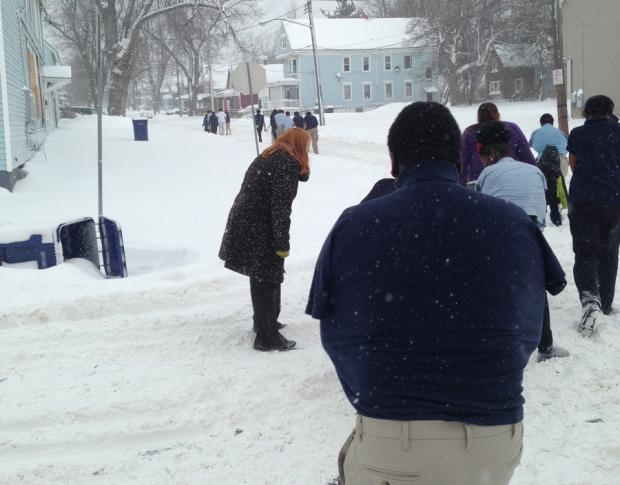 As if things weren’t chaotic enough for the Buffalo Public Schools these days, they went ahead and dealt themselves a self-inflicted blow by not canceling schools after a foot of fresh snow fell onto the morning commute hours with more accumulation scheduled until 4 pm.

There’s reports that as many as thirty buses never left the terminal because of drivers being unable to get out of their own neighborhoods. So it’s safe to say there were hundred, perhaps thousands of kids waiting for buses in the streets—as almost all sidewalks were not yet cleared—that either came an hour or more late, or never came at all.

For those “lucky” enough to catch their bus to school, the problems didn’t end there. An anonymous submission from Buffalo’s MLK #39 captured a disturbing event when a fire alarm was set off, forcing the entire student body—at about one-third its typical attendance—into unplowed, unshoveled streets. Many of the students were unable to retrieve their jackets, as can be noted in the images where students have their arms tucked into their T-shirts.

“If this was the suburbs, people would be up in arms,” our source wrote in an email. ”We want our kids treated the same. They are just as valuable.

And here, students line up in street blocking traffic because there is nowhere else for them to stand:

It’s almost 2 pm, the snow is still falling, and a depleted bus force is now tasked with getting the students who braved the day back home again.

For many students, school was a total waste of time as teachers couldn’t introduce new material with only a fraction of their student body in the seats. Here’s a comment from an earlier piece: