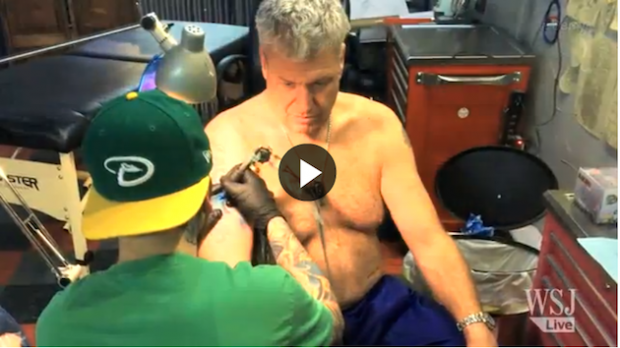 Until this weekend, Rex Ryan, the Buffalo Bills’ new head coach, had a Jets tattoo on his right arm. To be specific, it was a tattoo of his wife wearing a Jets jersey with former Jets quarterback Mark Sanchez’s number on it. Being the intelligent guy that we all hope he is, he decided to change that before his first game as head coach of his new team.

According to the Wall Street Journal, Ryan went under the needle in a tattoo parlor in Arizona and had that Gang Green turned into Bills Blue (and since he kept the #6, he’s technically got Bills punter Colton Schmidt’s jersey on his arm now). Now, I know a lot of you have sick Buffalo Bills tattoos too. Like, a lot of you. But we’ve got to give props to Ryan for this initial commitment to this team. Let’s not give him the key to the city yet, though.

Watch the video from the Wall Street Journal, below: