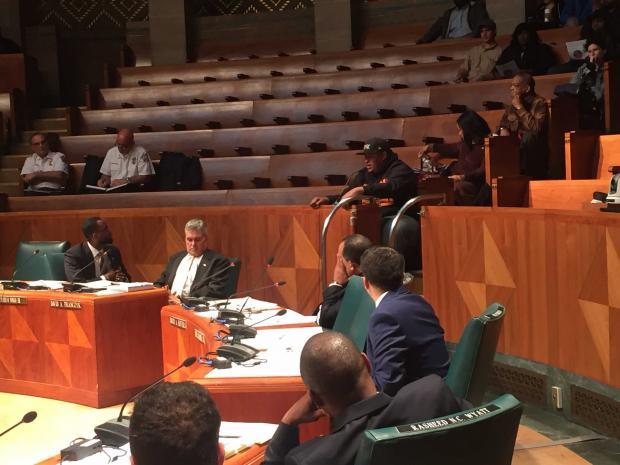 John Washington of PUSH Buffalo addressing the Common Council.
by
The Public Staff
/ Feb. 4, 2019 9am EST

For our special blizzard-impacted issue, we asked the community for wide-ranging responses to the general question of “Where is Buffalo now?” Below is one of such submissions.

Council Member Ulysees Wingo (D-Masten) was present and seemed receptive to the ideas presented that day. However, things took an odd turn when an audience member concerned with rising fees associated with unpaid tickets decided to ask Wingo why the city continues to raise fees.

Council member Wingo, in what I guess was an attempt to address the audience member’s concern, decided to give the room a lesson in civics and municipal governance. Wingo began by describing the three branches of city government and their most basic function. He then tells the room that the city’s executive branch sets the fees for the city, not common council, and that all the common council can do is approve or deny.

While Mayor Brown’s administration has the ability to set ticket fees, those fees cannot go into effect without the acquiescence of Buffalo’s Common Council. To put it plainly, the council can say “no” to the mayor and set the terms (AKA set the fee) for which they would say “yes.”

Wingo’s civics lesson was frustrating, insulting, saddening, and, most concerning, rang with powerlessness. IF the entire council feels as powerless as Wingo described the city’s legislative body, then the people they represent might also feel apathetic and powerless as well.

After this exchange, I began to think about our Common Council members and what role they play in our everyday lives.

We live in a city with steadily rising rents and nearly 58 percent of our residents are tenants. But for some reason, our council has remained largely silent to the Brown administration’s unwillingness to enforce our city’s fair housing laws. Moreover, those who live in BMHA properties, such as the Commodore Perry homes and apartments, have been largely abandoned by this city’s leadership. One doesn’t need to look any further than a Nate Boyd Facebook live to see how our “leaders” have largely abandoned those in need. But somehow, when the mayor appoints new leadership to the BMHA board, they are almost always approved with unanimous consent by the Common Council. This is not leadership, this is a moral failure.

As a resident of the Fillmore district, I have a lot of fond memories associated with the neighborhoods therein. Whether it’s riding on the back of my dad’s motorcycle at the Afro-dogs Motorcycle Club as a kid, going shopping at the Broadway Market with my grandfather as a teen, or experiencing food truck Tuesdays or Allentown barhopping as an adult, I can’t help but smile. Each of those memories, however, are also bittersweet. Just as I can recall the beauty of the nineties, I can recall the degradation that has occurred in my neighborhoods over the 28 years I’ve lived in Buffalo. According to John Washington of PUSH Buffalo, Fillmore has more than 1400 vacant lots alone. Many of those lots once housed neighbors and small businesses at one point or another, and I can’t help but wonder if they’d still be occupied if those folks weren’t represented for the past 30+ years by someone with little regard for their wellbeing.

If the people we elect to represent us aren’t aware of their power or, even worse, are unwilling to use their power to fight with us, we must begin to ask: 1) why do we keep electing these “leaders”? and 2) Who fights with us?

We are overdue a change in Buffalo. We deserve leaders, people who understand their role in government and uphold their office with diligence and moral conviction. We deserve a council that won’t kowtow to the Mayor or pretend as if they are powerless for the sake of political expediency.

Send us your response to Where is Buffalo Now at info@dailypublic.com.