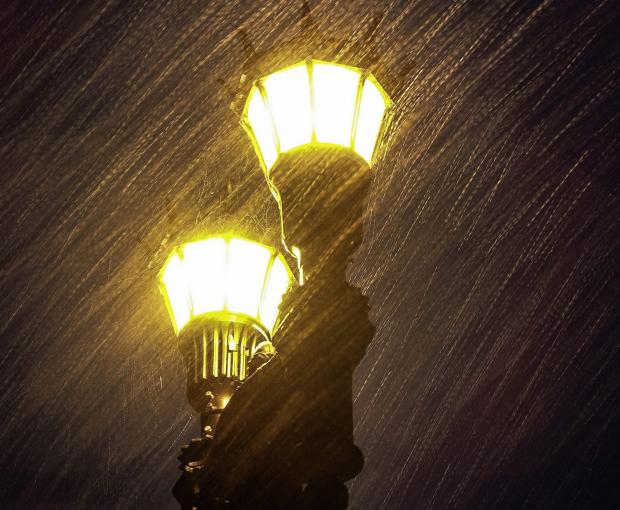 For our special blizzard-impacted issue, we asked the community for wide-ranging responses to the general question of “Where is Buffalo now?” Below is one of such submission.

Buffalo is canceled, so we stayed home with the kids. We told them to sleep in. The house was warm. The 100-year-old apartment we rent has updated insulation, updated windows, and exactly one place where the draft pours through. We cover that spot with blankets. It’s fine. Our pantry is so full that we are deliberately eating down the stores. My husband was making bread accordingly. I could not sleep so I woke early and shoveled the sidewalk. The snow was deep, the air was cold, but I got to return to warmth. The kids woke up and they started playing blocks in the living room. This is my world.

In Buffalo, we’ve found the makings of a truly good life. We have comfortable shelter, ample food, meaningful relationships, purpose in our work, and our kids have ample opportunity to thrive. Our neighbors are lovely. I drafted this essay while waiting for cookies to bake. It was a gesture of thanks: two of them snow-blew our sidewalk and driveway. The city that surrounds us has beautiful parks, a grassroots arts scene, and fantastic libraries. I read a book from aforementioned library before I fell asleep the night of the blizzard, my mind full of different ideas to consider. I know that many of my fellow residents might be falling asleep worried about their budget. I know that many of my fellow residents are piled under blankets because their house is drafty, or their budgets don’t have the space to fire the furnace. I know many of my fellow residents are hungry. I work in homelessness alleviation. Though I am on the policy side, I talk with many people on the phone who have nowhere to go and they are not sure what to do next. It is my job to help. It is also my moral obligation.

My daughter attends the public school that everyone wants their kids to get into. She tested in. This delighted me. Meanwhile, I know that while 65 percent of the school’s seats are fill by kids who tested in, according to the registration documents, the remaining 35 percent of the seats are fill by kids who are, in the following order of priority: siblings of students who live on specific streets, the other kids who live on those specific streets, the siblings of students who live elsewhere in the city, and everyone else. I noticed, reading that list, that these streets are all in white-majority neighborhoods. I noticed, reading the Census, that most of the city isn’t white. I wondered if that means an East Side kid who scores just below the testing cut-off gets bumped by a kid who’s lucky enough to have parents who lived in the right neighborhood. I am told this process has something to do with its institutional history, but I am suspicious of the fact it continues to endure. We are the sixth most segregated city in the country.  I have been a part of too many conversations with fellow white parents that discuss “bad schools” as though your moral duty ends after you decide not to enroll your kid there. We could be calling on processes that allow the inequity to persist. That would require the advantaged to be willing to give up some status. There’s only two ways to prestige: raise yourself up or push others down.

The advertisers lie: there is not One Buffalo. There are lots of Buffalos, with different degrees of power and comfort. They exist in different neighborhoods perhaps only blocks apart. There is the Buffalo of private schools and yoga studios. There is the Buffalo of drafty apartments and food insecurity. There are Buffalos in between and beyond, with families that have their names adorning buildings and people who just want to be in a building, out of the cold, please.

Fortune has never been evenly distributed. I am here to tell you that it is a moral problem, that all policymaking in this city needs to have a focus on alleviating poverty and undoing opportunity hoarding. This city must belong to everyone. The suffering caused by structural inequality casts a long shadow, if you choose to see it. If you are caught in it, you have no choice. I worry that, in our talks of renaissance, decision makers and publicists too often choose to look away.

We can pause business but we cannot pause the consequences of structural inequality. We could prioritize affordable housing, to reduce homelessness. We could prioritize living wages and prosecuting wage theft as larceny.  We could prioritize making a public transportation system that would not systemically exclude the people who rely on it from most of the region’s jobs. We could prioritize the community-wide remediation of lead paint. I open the newspaper and see articles about the Buffalo Billion project, with went mostly to one project. I remember reading a long discussion about public funding for a new sports stadium. This Buffalo renaissance seems to be more about the ways we resemble prestigious cities than the fortunes of every citizen who lives in it. We could work towards leveling power such that all citizens get a truly equal say, not the current system where some can leverage their wealth to advance their views and other people’s influence ends at their vote. The more grassroots the decision-making, the better off we will be.

I love living in Buffalo. I would love living here even more if my experience of Buffalo were more the universal one.