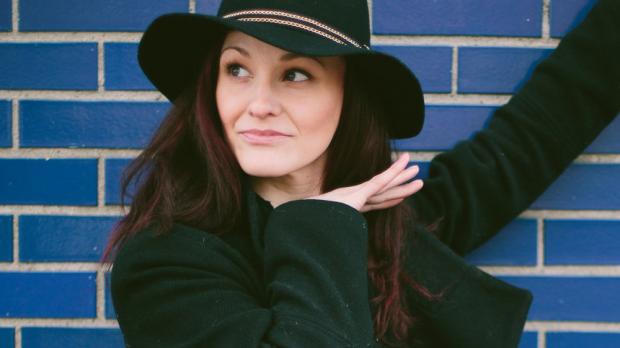 While attending one of Verve Dance Studio’s monthly dance battles, I witnessed an unassuming, smiley, petite woman elevate the room with her high-flying tricks and groovy rhythm. She transitioned from complicated floor-work into subtle moves that gave just the right bounce. Like the crowd, astonished and with a gust of enthusiasm, I cheered, satisfied that Resolve gave the b-boys a run for their money.

Stacy “Resolve” VanBlarcom is a resident dancer and teacher at the studio. Apart from the breaking group Differential Flava Crew, she is one of few female breakdancers in Buffalo. And she is a notable creative force. Verve, a hub for local hip hop dancers has been providing classes and hosting battles and community events since 2005. Established by Shane Fry, the studio is integral in maintaining the breakdancing culture here in Buffalo.

A public relations professional by day, VanBlarcom has used her talents to support the community. Her nickname Resolve came after she realized how much she enjoys being around her peers, and having the determination not to give up on anyone or anything. Ryan Nash, a fellow crewmate in Differential Flava Crew, explained just how much he appreciates his friendship with Stacy.

“Stacy is a friend-asset, someone who is not only a kind person and an honest friend, but also committed to improvement, so that it encourages people around her to act similarly. She has a sort of resolute enthusiasm that helps me improve my projects and my dancing. I met her when I was a freshman at UB, and through the years her energy has certainly contributed to my happiness. Stacy is committed to improving herself and bettering her community. It is great to be included.”

A dance teacher as well, Stacy is committed to having a positive impact.

“As a student of dance, taking class with Stacy has always been an empowering experience,” says a student from one of her former B-Girl Bootcamp classes. ”Her passion for the technique, foundation and overall culture of whatever style she’s teaching is inspiring to me. What I most love about her as a dancer, teacher and friend is the way she strives to make what she does ridiculously fun and educational for all ages and skill levels.”

Now with more than 20 years of trained experience that includes jazz and hip hop under her belt, this triple threat is only getting better. Originally from Rochester, the St. John Fisher alumna is a communications manager at Lifetime Health Medical Group. When she’s not managing over marketing strategies and developing company newsletters for the non-for-profit health service, you can find her bustin loose on the dance floor. This week we met up with her at Tipico Coffee to learn more.

How do you feel being a female breakdancer in Buffalo?
I think it’s an honor to represent women breaking in Buffalo. I also wish that there were more women involved.

Is there a tight-knit community of women who breakdance in Buffalo?
I know of one other b-girl. There’s been some other women over the years that have been here either through the colleges or just run in that were breaking at the time. But that I know of? There’s just a few of us.

Do you feel comfortable moving your body?
To physically do some of the moves, you can’t be afraid. As you’re learning things, you’re pushing through all this self doubt, all this literal fear of  “Am I going to hurt myself? Should I really be doing that?” So you’re pushing through all of these things to ultimately learn something new, to get better at your art or increase your skills. But you develop confidence, and that’s for any dance style.

Do you often battle other b-girls?
More so in other places I’ve battled other b-girls. There’s been some girls I’ve battled with, say, a two-versus-two. A few times there’s been people from Buffalo breaking at the time and other b-girls I know come down to Buffalo and we’ve battled together. B-boying is a male-dominated dance form, right, and you can tell by really saying “b-boying.” You can use the term “b-girling” but b-boying does apply for all breakers.

Really?
It’s just called b-boying, but you can specify b-girling if you want…

How do you feel about that?
Well, I have mixed feelings about it being separated, So you have in larger areas or larger battles there will be a b-girl and a b-boy category; they’ll be separate. What that does then is that it holds you to a different standard. So I think in some ways, it holds women back. Because if you think about there being no separation, then you have to meet the same standard everyone has to…at the same time it’s a really beautiful thing to dance with other women. I’ve been to some really cool events specifically geared toward women in hip-hop. There’s some really cool programs out there and it is an awesome thing to just—anytime women gather with each other it’s, it’s awesome. But, if the battles weren’t separated, you know—we’re all competing against each other.

What makes Verve special?
Verve is something that I think everyone in Buffalo should know about. I always find new people who’ve never heard of it and it’s actually been in the community for 11 years. It’s a really valuable resource, that offers the same environment where kids can learn. It’s a really unique place in Buffalo, and its unique in the breaking community as well, just as a family friendly place and a place to learn about hip hop culture. All the friendships and relationships that have developed because of Verve and because of Battle @ Buffalo is just astronomical. I think that has a huge value in the community because you’re meeting and developing friendships with people who are not like you, but you share this common passion. And you share a common love for hip-hop culture.

A lot of the classic breaks came from the 1970s and they’re still used at the biggest battles in the world today. One of my favorite songs is called “Pam.” It’s by Crazy Elephant, that’s the name of the band, and it was made in 1969.

Do think breakdancing has preserved the hip-hop culture? The fact that it originated from breaks in 1970s music.
You feel the breaks, dancers would wait until the break of a song. So that 10 or 15 seconds that were the drums and the bass and everything else goes away—they would wait. They would stand around just kinda dancing at these parties right? And Kool Herc was actually the first person to extend the break. He bought two copies of the same record so that when the break ended on one record he could flip it and keep it going for as long as he wanted. And that allowed  people to develop their moves further. If I have minute to dance, I’ll have a lot more to do with it.

When you first were introduced to Verve, did you know a lot about Hip-Hop culture, or were you just interested?
I didn’t know a lot about the history, that was all research that I did. I was introduced to early hip-hop like Eric B and Rakim, the Beastie Boys most through my older brother. Badu, actually the first CD I ever owned was Baduizm. I’m proud of that one but, yeah as far as hip-hop history and research about the culture, that was all stuff that I did.

What is the most interesting thing you learned within researching hip-hop history?
There is alot, alot. I think one of the most significant things is that people wrote about the social issues that were happening in their neighborhoods, in their communities, in their lives, and so you have people, like say MC Lyte, and she’s 14, 15, whatever writing her first album—and she’s talking about crack in her neighborhood, and how that was affecting things. And I just think it as a way to give a voice—giving voice to people who otherwise didn’t have that opportunity or vehicle to express themselves or be heard. I definitely think that music and art in general helps us understand each other, when we can identify, or something makes us feel similarly—you know just something that we’ve experienced; it’s a connection. People don’t feel alone, which is important. When you’re listening to something someone else has produced then you can feel what they’re saying and you don’t feel alone in your experience.

You also teach House. I’m interested.
You should take it! It’s every Thursday from 6pm to 7pm through February 9. But the week after that, we start Advanced Hip-Hop.

I’m not sure if house music originated in Chicago, but it’s deep in Chicago, right?
It originated in Chicago. There was a place called “The Warehouse,” and there were people who Dj-ed at the Warehouse and who also worked at a record store called Imports Etc. They had a section of records that were being played at the Warehouse at the time and people would come in looking for those records and it became the “Warehouse” music section and it just got shortened to “House.” It’s a dance that developed in clubs…

I see you most as a breakdancer, so how did you start teaching House?
I started housing…

Housing? Is that a verb?
Yup, housing—about 6 years ago and I really just learned from other friends I knew who were house dancers. They would always tell me just do what you feel. So from workshops and dancing with other friends and traveling and over the years I’ve picked up the housing style and developed my own stuff. It’s a very free dance, anyway. My style of house isn’t gonna look like other people’s style.

You had the opportunity to dance with the late Sharon Jones. How was that?
She was incredible and I was always inspired by her because she didn’t find commercial success until later in life. There’s a documentary that’s out now about Sharon Jones. She talks about how she was basically told, “You’re too fat, you’re too short, you’re too black, you’re too old.” Just all these reasons why she couldn’t have a successful music career. I don’t know how to describe it really, but I did get to dance on stage with her—it wasn’t a planned thing. It was at a concert in Rochester in I think 2012 and we were in the audience and we were just cyphering. We just had a circle going in the audience and she called us up there and I think she kept us up there for two whole songs. And she actually changed their set list so that they could play something faster for us to dance to. And I just thought that that was so cool because who does that? She didn’t feel the need to always have the spotlight. Just the fact that she changed her set. I will never forget it.

What is your message for female dancers?
For women: You’re just as capable as men to learn breaking, you’re strong enough. I hear women say that a lot. “Oh, I don’t have the upper body strength.” But you develop it, all the muscle that you get from breaking is all functional muscle. It’s gonna come as you learn your foundation. And you’re just gonna build up all the strength you need. For the women’s class, I try to talk about significant women in hip hop in all the elements, so DJs, female graffiti artists, female MCs and B-Girls of course.