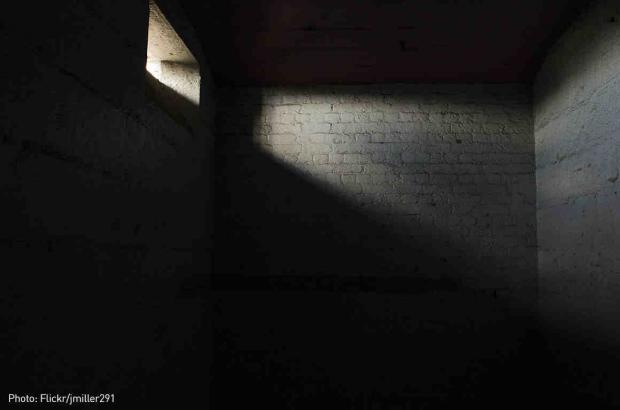 It was a frigid Tuesday outside of the Rafi Greene Center, but the cold didn’t stop dozens of concerned Buffalonians from cramming into the community center on Fillmore Avenue to see the mock solitary confinement cell. Community leaders and activists coordinated the event alongside the grassroots organization dubbed the New York Campaign for Alternatives to Isolated Confinement (NYCAIC, their local affiliate being WNYCAIC) to show the community first-hand what our tax dollars are going toward when we throw humans into cages and forget about them.

As Jerome Wright, moderator of the event and survivor of the internationally infamous US Penal System, began to speak, a soundtrack of what seemed to be howling dogs or wolves was playing in the background. When banging and stomping was heard amid the howls an extremely uneasy feeling came over. It was soon revealed to the packed crowd that these strange sounds we had just heard are actual human beings driven to the point of madness by solitary confinement. “If you treat a human as an animal, bet your last dollar that’s what you’ll get,” Wright told the crowd.

Another organizer with NYCAIC named Doug Van Zandt, told the crowd his story. Why would a seemingly well-off middle-aged white man from the Albany area join the campaign? His son, at the tender of age 17, was tried and sentenced for a botched robbery not too long after an onset of mental illness. He had begun experiencing auditory hallucinations. Van Zandt’s son was subsequently tried as an adult by a judge named Thomas Breslin, who later campaigned with a tough-on-crime stance and won a seat on the state supreme court. Van Zandt described how Albany District Attorney David Soares also refused to show compassion to the obvious mental illness his son was struggling with. Needless to say, Doug’s son was sent to prison at the age of 17.

Doug Van Zandt continued to tell the crowd about his son’s experience in prison. For the minor mistake of taking one piece of bread from the prison (yes, actual bread), Doug’s son was punished and moved to a dormitory-style part of the facility where he was sexual assaulted and preyed upon to move contraband by other inmates. He was eventually caught moving the contraband and sent to solitary for a week, even though he was originally sent there for 70 days, a period of time which is illegal under laws meant to protect mentally ill inmates from such draconian punishments. His parents were able to get him out, but he was transferred to another facility and eventually sent to Fishkill prison where he was taken off his psychotropic medication. After three years in prison, Doug’s son committed suicide. He was 20 years old.

Speaking with Pate later, he told me he had spent two years in and out of solitary confinement. Imprisoned at the age of 19 in a maximum security facility, Victor was sent into solitary once for stepping over an arbitrary line in the hallway of the prison. This was considered “disobeying a direct order.” That particular incident sent Pate to solitary for three weeks. He told me he was calm the first few days. However, after some time he began to “long for another human being’s interaction, or even a conversation.” Feeling scared and isolated he begins to have entire conversations with himself to “maintain some sort of equilibrium.”

After listening to these accounts of these survivors like Jerome Wright and Victor Pate, with the recording of the banging and howling from real people in real cages still ringing in my ears, I decided to step inside the mock cell built by WNYCAIC. To be completely honest I was a bit scared, but I was mostly hurt and angry. My first thought was “I help build the cages.” Billions in tax dollars, yours and mine, going not toward rehabilitation, but instead driving fellow Americans to insanity and eventual suicide.

Learning about the conditions was just step one for the assembled at Rafi Greene center. The next step was doing something to end the torture of our fellow New Yorkers. That’s when organizers for NYCAIC spoke to us about the bill they and over a hundred state legislators have been championing, Humane Alternatives to Long Term Isolated Confinement or H.A.L.T.

Under H.A.L.T., no person can be isolated for more than 15 days, which is the international standard. It would also mean a person who has to be isolated needs to have more support and therapy to address the issue that got them isolated in the first place, and restrict the criteria for who can be in isolation for that 15 days.

Petitions to end the torture were passed around and signed along with an enthusiastic guarantee from many Buffalo residents to join the crusade to end torture and isolation by joining WNYCAIC for what they call Advocacy Day in Albany, NY on March 13th. Personally, I don’t want anymore of my taxes paying for torture. On the 13th of March, I’ll be in Albany, and for all any of us know there are tens of thousands of New Yorkers languishing in the cages hoping you join the people on Advocacy Day as well.