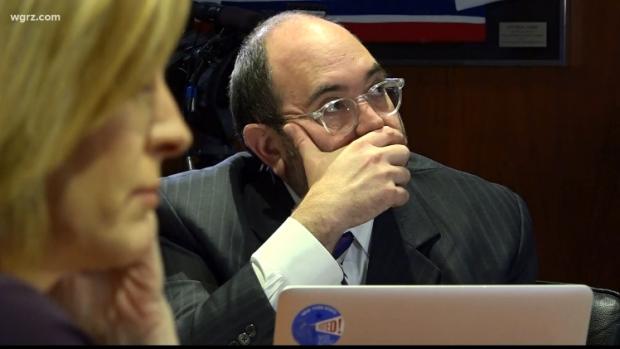 I hadn’t planned on watching the State of the Union. You know — don’t feed the troll.

Alas, I sat in a conference room at WGRZ Tuesday night with Maryalice Demler and Republican strategist Andrea Bozek to watch it. At least in this context I had no choice but to pay close attention to it, and followed along with its prepared text.

I quipped before it began that politics in this country have become exhausting. Partisanship — even as deep as it is now — is neither unhealthy nor unprecedented, so that doesn’t bother me. What I mean is that every calendar day is packed with literally a month’s worth of scandal and breaking news. Every day brings with it limitless shitshow additur that it’s no wonder people are retreating to binges of Netflix and booze. I simply can’t keep up. I don’t even have it in me to give an example from Tuesday about the executive refusal to carry out duly enacted Russia sanctions, or the list of oligarchs — cribbed from Forbes — that the Trump administration used as its list of sanctioned Russians, or the brazenly partisan hackery of the memo regarding FISA warrants targeting wannabe Russian spy Carter Page that Rep. Devin Nunes — who had supposedly recused himself from all things Russia — is pushing like a bottle of Oxycontin in a back alley.

So, I watched. This man who commenced his campaign to be the leader of the free world by declaring undocumented Mexican immigrants to be rapists and murderers, who has taken to Twitter to pick fights almost exclusively with people of color, who makes up schoolyard nicknames for people he doesn’t like, who can dish it out but whose skin is as thin as tracing paper — this man now pleads for national unity.

Yes, Donald Trump, of all people, spent a few minutes on Tuesday calling for national unity; just before he exploited families’ grief to insinuate that undocumented unaccompanied minor immigrants are all members of a gang, or that the only gang violence in the US comes from immigrants; or that terrorism in the US is immigrant-driven; or that family reunification — Trump prefers the white nationalist term “chain migration” — has led to violence against Americans; or that MS-13 is somehow an existential threat to the United States.

While he agitates for $25 billion in taxpayer money for a wall that he said Mexico would pay for, he says in his State of the Union that when “there is a frontier, we cross it.” How droll.

Listen, just because Donald Trump didn’t pause in the middle of his State of the Union to pull his pants down, squat, and do a shit onto the Rostrum doesn’t make any of this Presidential.

All of us, together, as one team, one people, and one American family.

That’s what he said — he wanted to talk about Americans’ shared future; yet within minutes, he was back to dividing us — by race, as it relates to kneeling protests during the National Anthem; by religion and sexual orientation and gender identity, as he touted his moves to enable Christianists to discriminate against LGBTQ Americans; by immigration status, as he continually talked not of “Americans”, but more specifically of “citizens”, as if Green Card holders and refugees don’t count; and by using grieving families to illustrate how immigration is a scourge that kills innocent children, and must be severely restricted.

So tonight, I am extending an open hand to work with members of both parties — Democrats and Republicans — to protect our citizens of every background, color, religion, and creed.  My duty, and the sacred duty of every elected official in this chamber, is to defend Americans — to protect their safety, their families, their communities, and their right to the American Dream.  Because Americans are dreamers too.

The converse is true, as well; Dreamers are Americans, too.

As Trump went through the “four pillars” of his immigration reform proposal, one thing stood out — the most effective deterrent against immigration of any kind — legal and illegal, checked or unchecked — is Donald Trump and his anti-immigrant rhetoric. “Chain migration” hurts no one; has hurt no one. The visa diversity lottery was put in place under the first President Bush to attract people from countries whose citizens had been under-represented in previous years’ immigration trends. Trump suggested that this was just a blind hand-out of immigration visas, as if these people didn’t go through the same background checks and vetting as any other visitor or potential immigrant. I’d be much more amendable to a switch to a Canadian-style merit-based system if Trump would stop lying and making stuff up about the current system.

As he cheered the abolition of the health insurance mandate, Trump called for drug prices to come under government control because of unchecked gouging. Hey, if other countries can do it — so can we. The difference, of course, is that every other country also offers its citizens a guarantee of comprehensive health insurance as a human right. We don’t; Americans think the people’s right to go into medical debt or bankruptcy is more important than a right to not have to worry about how one would pay for reasonable and necessary treatment.

What’s the point of less expensive medication if you have no health coverage and/or can’t afford to see a doctor to prescribe them?

Trump wants to let people take experimental treatments for illnesses — sounds good. He spoke of trade deals and how he’d make them more fair, as if they hadn’t already been carefully negotiated in the past to benefit all signatories; as if trade deals were a handout of some sort. He touted a $1.5 trillion infrastructure plan; great! Our infrastructure is decidedly outmoded and poor.

But Donald Trump can’t spend 364 days and 22 hours of every year being a divisive shit, and then suddenly expect or receive plaudits for a contrived message of unity one night in January.

Tuesday night, after we watched the State of the Union, Maryalice Demler wanted to get a sort of local perspective on Trump’s speech. I honed in on immigration — it’s a topic that has intense, personal meaning for me, and one that this President has used to divide us since literally day one of his Presidential journey. I like the idea of a path for citizenship for Dreamers, but I don’t quite get the 12-year wait; we’re not Switzerland. I heard absolutely nothing about refugees or whether — or how — we might accept immigrants who aren’t, for instance, chemical engineers or computer scientists. Think about how much Buffalo and western New York have benefited economically and culturally from recent immigrants and refugees from places like Burma and Somalia. These new Americans are no different from your ancestors who came from the shitholes of yesteryear like Ireland or Germany or Italy. They come to this country because “American” isn’t a homogeneous ethnicity — it is a hodgepodge of people from all places, all religions, all backgrounds — all here, together, to make a better life for themselves and each other.

Here’s the piece they did: