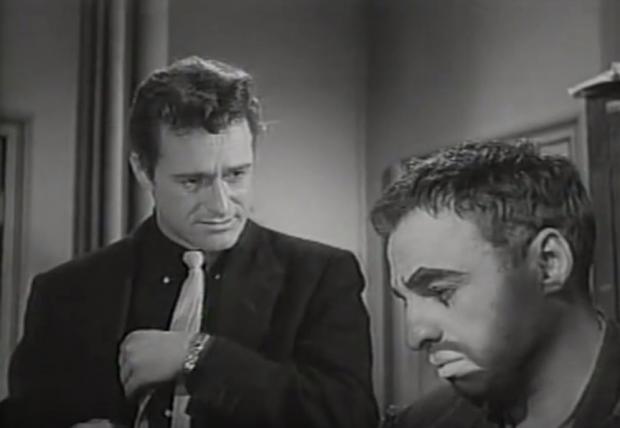 RIP Dick Miller, one of the last of the great character actors: you may not know the name, but you know the face from nearly 200 movies, including just about every movie Roger Corman ever made. Media obituaries will tell you his best known role was as Murray Futterman in Gremlins. But the one to remember him for was his lead in A Bucket of Blood (1959), Corman’s beatnik horror comedy in which Miller starred as Walter Paisley, café busboy and would-be artiste who gets the attention he craves by covering corpses in clay and passing them off as sculptures.

My favorite Miller moment comes in Carnival Rock (1957), in which Corman uses a plot vaguely lifted from The Blue Angel (1930) as a frame for a handful of musical performances. Miller plays Ben, the pal of troubled club owner Christy Christakos (David J. Stewart). When Christy gets into trouble with gangsters, Miller tries to persuade him to come with him to Buffalo, where his cousin Irv is running a TV station. (I always meant to get a copy of this clip and send it to Irv Weinstein, who surely would have enjoyed the line “Irving’s a nice boy but what he doesn’t know about show business would fill Radio City Music Hall twice.”)

Revealing that he has just been fired, Ben pleads, “Whadda we got? Nuthin’. But there’s a whole new life waiting for us up in Buffalo NY!”