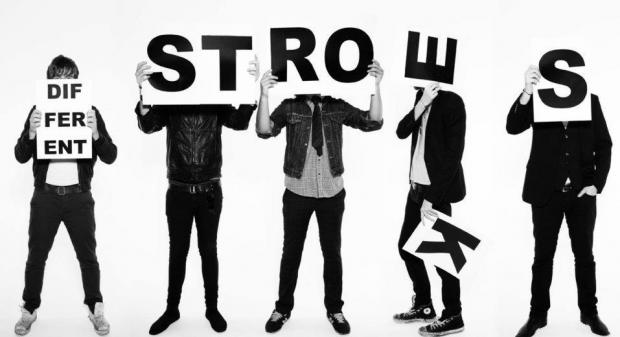 For almost a decade now, the influence of the Strokes has been in question. Some bloggers have called the New York City-based band the most influential American band of the 2000s so far, who ripped the attention away from cringeworthy nu-metal bands early in the decade. Some beg to differ, calling into question their “indie-ness” or staying power.

Whatever you think about the Strokes, there’s no question that our local tribute band version, Different Strokes, have their sound, and even their look, nailed down. And you’re likely to recognize a few of the guys in the lineup, which features members of Humble Braggers, the Slums, Fever Box, and the indie rock DJ crew Dance Yrself Clean, who’ll be on hand to DJ at the band’s next show, this Friday at Duke’s Bohemian Grove Bar. Their friends the Eaves, formerly known as Sixties Future, will be on hand to warm the crowd up.

This week we spoke with Ben Parsons and Tom Burtless of Different Strokes about where their love for the band comes from, and how to channel your inner Julian Casablancas.

Tom Burtless: I play in Humble Braggers, I played in Honey Coma and the emo cover band Girl Jeans, and I am basically Albert Hammond Jr. in Different Strokes.

Obviously great name for the band. I hope people don’t show up looking for Gary Coleman. Tell me a little bit about the origin of the band?

TB: Ben and I were at karaoke one night and Ben sang “You Only Live Once,” and we were both kinda, like, “What if we did a Strokes thing.” I didn’t really think too much of it. I didn’t think we’d play more than just that first show we had for Halloween, but we thought that it would be a really fun idea. I just threw out a feeler on Facebook to see if anybody would be interested in doing it, and my buddy John [Grace], who plays bass, just loves to play in cover bands, so he was immediately on board even though he barely knew any Strokes songs. I think Pat Butler tagged Griffin [Smith] and was, like, “I’m pretty sure Griffin knows every one of these songs anyways,” so he was in. Then Ryan [Schila] sent me a message and said he was totally in. It’s just about our love of the Strokes.

Where does your love for the Strokes come from?

BP: For me personally, the Strokes were one of the first bands that I got really into, probably through Tom’s brother back in the early 2000s. It’s just always kind of been a strong passion that we’ve both had for the band.

TB: We’ve been friends for a super long time, and it was one of the first bands that we—when we started getting into music—were, like, “Oh, hell yeah.” They’re one of the most important bands from like the past 20 years.

Ben, how do you channel your inner Julian Casablancas?

BP: Honestly, not gonna lie, but Julian Casablancas has been like a fuckin’ fashion idol for me for quite a while. It’s kind of something that’s always I think subconsciously been there. To me it’s not that much of a stretch to kind of try to emulate him.

So you’re kind of just channeling him in your everyday life?

BP: [He laughs.] I guess I’ll admit that, at least somewhat. Like Tom said, we did it at karaoke before. The Strokes have been like my go-to karaoke band, so I feel like I’ve had a lot of practice trying to get his vocal style down.

Tom, has learning the structure and kind of sensibilities of the Strokes’ songs affected at all how you think about your own music?

TB: It’s kinda funny. A little bit. There’s definitely a separation between writing music and listening to music—or at least I think you try to have one. I don’t sit there and try to analyze everything I’m listening to the same way that I would a song that I’m working on. But it is kind of funny to learn these songs and be, like, oh my god, the repetition and the simplicity, which I never really thought of too much is kind of crazy. Then to realize which songs are way more complicated in ways that I wouldn’t have thought. It’s interesting deconstructing them. Humble Braggers is working on our next release and still finishing up some stuff, and it’s definitely making me think a little bit about the structure of our songs and how simple or complex I want them to be in reference to these songs that have been held as kind of classics for the past 15, almost 20 years.

Favorite Strokes album and why. Go.

BP: I’m probably going to have to say Room on Fire. I spent a good majority of my freshman year in high school listening to that album front to back. I’m in the small minority that kind of likes the whole Strokes discography, even past the first couple albums. But most people would probably agree the first two are classics.

TB: I’m tempted to say the same but it’s really tricky. I remember my brother showing me Is This It when I was like 12 years old, and there’s a lot of nostalgia wrapped up in that first record, but the second record I came into maybe more on my own. The last show we did Is This It front to back, so it was really cool to learn all of those songs and reliving all of the nostalgia. So I’m going to go with the first one. I’ll be different than Ben. If I ever hear that first riff start for Is This It, I can’t turn it off. It’s one of those things where I have to listen to it.

What percentage of your set is songs from Is This It?

BP: It’s a good 50/50 between Is This It and Room on Fire and then we have a few others thrown in there from like First Impressions of Earth and Angles. Nothing from Comedown Machine yet but maybe we’ll get there some day.

Where do you go from here?

Anything else you want to say about this upcoming show?

TB: I don’t think so. Just come? The Eaves are opening and they’re fantastic. I’m glad they’re on the bill with us.