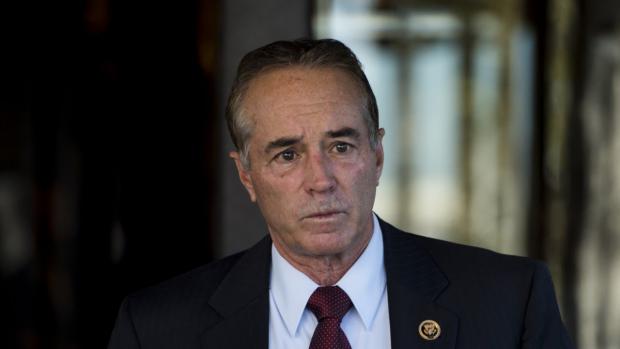 Congressman Chris Collins is up for re-election this fall; five Democrats, so far, are vying for the chance to run against him. Photo courtesy wnymedia.net.
by
Bruce Fisher
/ Jan. 31, 2018 8am EST

Mark Poloncarz soundly trounced Chris Collins in 2011 to succeed him as Erie County Executive. Democrats enjoy a massive registration advantage in Erie County, but not in those portions of the county that lie within the boundaries of the 27th Congressional District—the seat Donald Trump’s first Congressional endorser took by a tiny margin (5,000 votes out of 330,000 cast) from Lieutenant Governor Kathy Hochul in 2012.

Poloncarz has told people informally that he will not challenge Collins in 2018 because the Democratic Congressional Campaign Committee refuses to commit that it will invest in a Democratic challenger, despite Collins’s well-publicized alleged violations of ethics rules, and possibly laws, on insider stock-trading.

The Washington Democrats see that the 27th District has a Republican registration advantage. Trump won the district just under 60 percent to Clinton’s 35 percent. The district voted for John McCain and Sarah Palin 55 percent to 44 percent over Obama-Biden in the teeth of the financial crisis in 2008.

But once again: Hochul, who had won in Erie County, was known in the Buffalo media market that reaches as far east as the Genesee River. She won in a special election in 2011, defeating a big-spending Republican. She won in a district that is 93 percent white, that stretches from Niagara Falls to Canandaigua, the college town of Geneseo, the struggling cities of Batavia and Warsaw, and a glorious rural and small-town landscape of dairy farms and Victorian-era homes where many lawns are evidently permanently planted with signs that say, “Repeal the SAFE Act.” It’s a landscape where sagging agricultural commodity prices, deindustrialization, outmigration of the educated, and low real-estate values have been facts of life for years and years, but the district also includes Amherst, Clarence, Lancaster, and Aurora, where real-estate values are prime, and where farms are decorative accoutrements, not livelihoods.

As of today, there is no candidate known to the media market. Batavia businesswoman Diana Kastenbaum, whom incumbent Collins defeated by more than two to one in 2016, neither raised nor invested personal wealth in raising her name recognition above single digits. As Hochul is running for re-election as Lieutenant Governor, she is evidently unavailable. Poloncarz, who defeated Collins in Erie County and who has made it clear that he’d like a political career beyond Erie County, recently told people that Washington Democratic funders are interested in the Syracuse seat, and in the Utica-Binghamton seat, and in the Hudson Valley seat, but not in Collins’s district.

Democrats worry, as they should, that Republicans are better at politics in the greater Buffalo media market than they are—specifically, that Donald Trump and his allies will continue to win in districts like New York’s 27th because Republicans coordinate and repeat and reinforce their core message with a big AM talk radio station, a Fox News-affiliated TV news shop, and a reliably conservative daily newspaper.

Both have impressive public-service credentials. Bunny was an Army Ranger in Iraq before joining the Erie County District Attorney’s office. McMurray was an Eagle Scout, a Fulbright scholar, and a lawyer who worked with the Judge Advocate General’s Corps in Germany as a civilian and went on to practice law in both China and South Korea. They presumably have the same kind of network of military and professional contacts that made former candidate Erin Cole so promising before that military veteran, a linguist like McMurray, awakened to the reality that the Democratic Congressional Campaign Committee will be absent.

In a self-reinforcing writeoff of the western part of New York State, Democrats face this reality: Neither Bunny nor McMurray has any chance whatsoever to raise the $2 million to spend on introducing themselves to the voters of Erie, Niagara, Orleans, Genesee, Wyoming, Livingston, Monroe, and Ontario counties.

And until they raise their name recognition, and remind voters here in this media market that there is an election coming in 2018, Republican media coordination produces this set of messages: The Democrats (they prefer to term them “the Democrat Party”) has no use for white men, has contempt for the rule of law for illegal immigrants, and is utterly contemptuous of the heterosexual nuclear family. Voters in the suburbs of both Buffalo and Rochester, plus Niagara Falls, Lockport, Warsaw, Batavia, LeRoy, Geneseo, and Canandaigua, and dozens of towns in the 5,000-square-mile district get this message very consistently. It is cultural conditioning, and it is branding, and it has been extremely effective.

But politics is also extraordinarily simple: Voters will overlook party labels if they know and like the challenger to a known and disliked incumbent. A strident campaign against Trump may be the desire of progressive Democrats, but the available evidence is that most Republican voters still cleave to Trump, and that most white voters strongly concur with Trump on immigration issues (even as they also love the children of DACA), but they’re wondering—especially in places like the 27th district, where as many as three-quarters of households report incomes that are $10,000 or more below the statewide median—what’s going to happen to their healthcare?

This is why, though he may not want it, Mark Poloncarz fits the bill.

Poloncarz has universal name recognition in the media market. He has high positives and low negatives. He has articulated popular Democratic positions on national issues, at least in social media, and as the incumbent Erie County executive set to run for a third term in 2019, he faces no personal electoral trouble in 2018—so even if he were to run a campaign entirely on the threat that Republicans have posed and will continue to pose to healthcare coverage for millions of New Yorkers, there is no downside to carrying his party’s banner and talking healthcare, healthcare, healthcare.

Prosecutor Bunny and Supervisor McMurray have zero name recognition, while Poloncarz is known.

Notwithstanding some recent scholarship that suggests strongly that identity politics has eliminated swing voters, there is ample evidence (i.e., Hochul’s near-miss in Obama’s re-election year) that turning non-participants into participants, or motivating the previously unmotivated, can be a game-changer.

Curiously, some of the tools Democrats now use—like the notoriously amateurish and inaccurate VAN system—is overloading them with data that dissuade them from the door-knocking, networking, phone-banking, and shoe-leathering that has traditionally been done with voter lists. And for every Russian bot that plants itself on social media, there’s a Washington industry promising, credibly, that a counter-bot can be deployed, and cheaply.

It’s a matter of hunger, actually. One wonders how hungry are Democrats to avenge their losses in 2016 when Chris Collins isn’t targeted despite his massive negatives. Could it be that Democrats are close to admitting that they cannot be as disciplined as the Republican operations that coordinate message across many platforms, day after day, month after month?

The House under Republicans has shown itself uninterested in governing, to the dismay of Republican veterans who think it’s political suicide (and bad public policy) to wreck Medicare, Medicaid, the State Department, the EPA, and Department of the Interior, and other useful operations. Leaving a leader of the anti-governing faction of the Republican Party essentially unchallenged isn’t a particularly patriotic thing for a well-known Democrat to do, actually—especially a Democrat who has zero chance of ever running for statewide office unless he does what the late Ned Regan did, which was to move to the New York media market. (In recent political history, the only Democrats to escape Western New York have been former Jamestown Mayor and Southern Tier Congressman Stanley Lundine and former County Clerk Kathy Hochul, who both became Lieutenant Governor running alongside a Cuomo. Of Republicans, Dennis Vacco had one term as Attorney General thanks to the midterm swing against Bill Clinton in 1994.)

Perhaps it’s the shrinking relative value of Western New York that’s driving the decision: Population growth in the New York metro area, especially inside New York City, is strong. Population stagnation is the rule in all of Upstate, with shrinkage ahead for Western New York, the Southern Tier, and the North Country. Maybe it’s all futile. Maybe our heads should just hang in despair.

But there will be a Member of Congress elected in the 27th district in 2018. Unless Collins’s challenger achieves name-recognition, or starts out with it, Collins simply wins.

Bruce Fisher teaches at SUNY Buffalo State, where he is director of the Center for Economic and Policy Studies.

Editor’s note: An earlier version of this story identified McMurray as an “Army lawyer”; McMurray worked with the Army’s JAG Corps but did not serve in uniform. The article has been edited to clarify that.