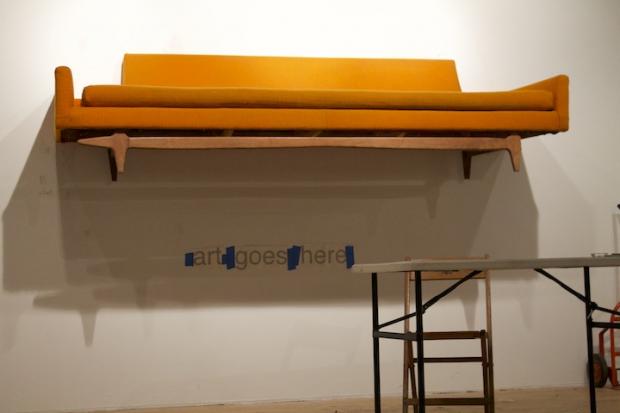 Money and art. Two of the toughest topics period. Both mysteries. At opposite ends of the spectrum, so to speak. But strangely and intimately related. For one thing, as fungible. Convertible the one into the other. So that banks and oil barons buy artworks as investments.

And so it’s a bold move by artist Ulysses Atwhen to take on both topics at once in his current exhibit at the Big Orbit gallery. As to the mystery aspect, quality, character. Also as to the fungibility.

The Greeks invented money. Metal coins. You take a little piece of metal. It has some value. Use value you could say. You could use it for something. Make something out of it. Let’s say it has a value of x. Then you strike it with some other harder piece of metal, maybe with some kind of relief or incised image on it, so that it makes a mark on the original piece in the form of the image, but in counter-relief or counter-incised. Immediately the struck piece of metal changes value. Maybe to 3x. Maybe 6x. Whatever you say, or someone says, or the polity says. Some sort of authority figure or entity.

Art also—but particularly modern art—is—or often is—the product of a similar fiat creative action. And also—particularly modern art—requires some sort of authority figure, for validation. Somebody had to say—convincingly somehow—that the Brillo boxes Andy Warhol was turning out were different—aesthetically different—from the Brillo boxes the grocery store was throwing out on trash day. Or for that matter, aesthetically different from the plain boxes he started with, and painted the Brillo logo on. Just like the actual Brillo logo.

The Ulysses Atwhen money and art pieces comprise four actual bed mattresses transformed for present purposes into painting matrix canvases, painted monotone off-white, attached to which are actual paper money bills of different currencies and monetary denominations—but in each mattress work, all the same currency and same denomination—Greek five-euro bills in one case, in the others Chinese yuan, Indian rupees, and Brazilian reales—arranged in each case to spell out the word “alchemy,” the artist’s summary assessment apparently of the money creation matter, but also perhaps the art creation matter. But certainly the art valuation matter.

Meanwhile, the incorporation of actual money in these works facilitates—to a point at least—the valuation/fungibility matter. The installation includes a computer monitor flashing minute-by-minute exchange rate differences for relevant currencies—euros to yuan, euros to U.S. dollars—plus a complicated formula for calculating fair price values for the individual mattress works, based on the component actual money values.

Oblique references in these works to Warhol, and closer to home to Tony Conrad. The monotone painted mattresses visually reminiscent of Conrad’s very-slow-motion movie paintings—monotone painted canvases undergoing—like painted surfaces universally—gradual fading or darkening—light exposure effects—over years, decades, eons. But also as to the selling—in several senses of the word—of the slow-motion-movie concept and artworks to venues such as the Albright-Knox, which owns one or more of them.

Another mattress work, along with the four actual money examples, uses fake money—five-dollar bills that look real at first glance but are phony, and marked “for movie use only.” Another movie reference, and sardonic comment on the fungibility matter. (The “alchemy” word in this case is in mandarin Chinese, so I’m told.)

The rest of the exhibit a pretty mixed bag of items with tangential reference sometimes to money and/or art. The title of the exhibit is “Hoarder.” You get the sense of somebody with a strong hoarding instinct—or maybe it’s a gene—finally having gotten around to cleaning out his basement or attic, and these are some of the items discovered or rediscovered in the process.

Some vintage bingo game equipment, including a huge illuminated numbers board and control panel with a zillion toggle switches to switch on individual numbers, and glass box with dancing ping-pong balls for random numbers selection. An appropriation art piece, being this artist’s remake—by the addition of handwritten legend—of artist Felix Gonzalez-Torres’s work on paper owned by the Albright-Knox and reproduced in multiples for general distribution. And other movie reference items—a non-functioning projector aimed at a spool of film on a hook on a wall.

Also, a small classroom-like setup with desks and a blackboard, and smaller classroom-like setup as a prototype. Also a 1950s-era modernism sofa mounted high on a wall, and in the space below the sofa, the legend in bold letters: “Art Goes Here.” And an even more enigmatic piece including a turntable and a video camera—mounted high on walls, much like the sofa—recording and projecting the turntable movement.

When I visited I was told new items would be added, and some of old ones possibly retired during the run of the show. (Basement or attic cleaning isn’t accomplished in a day. New stuff turns up. That’s part of the point.)

The show continues through February 23.