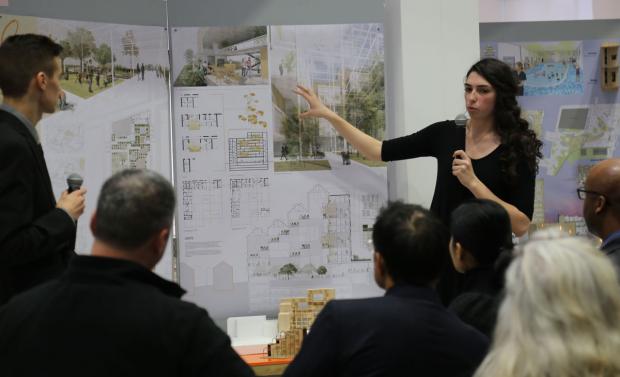 UB architecture students Mike Paraszczak and Liz Gilma present their studio project, which is part of an exhibit hanging in the Hayes Hall lobby.
by
Jack Foran
/ Jan. 31, 2018 9am EST

Can a building promote economic justice? One of the headier questions posed by UB architecture students amid a score or so of undergrad senior team projects complete with impressive architectural models and expository materials currently on display in the Hayes Hall lobby.

Multi-story constructions of unusual forms and functionalities. Architectural megablocks with randomness-effect substantial cut-out volumes. High-rises with elliptical-form atria slicing from roof to ground floor, and copious rooftop and other exposed areas greenery—including along atria edges—for aesthetic but also therapeutic purposes. Or sometimes not megablocks at all, but more purely sculptural forms. Conglomerates of low-rise and tower segments, with cantilever extensions from a main building mass, more or less balancing cut-out volumes. And tower portions sometimes diverging alarmingly from strict verticality.

Constructions usually intended to be located in the medical corridor or nearby Allentown, with the medical and/or artistic communities particularly in mind. (Often sited on the underdeveloped block on the south side of High Street behind the Medical School, or in Allentown on the southeast corner of Delaware and Allen streets, property currently occupied by a convenience store and gas pumps.) One or two of the projects even address needs of the nearby Fruit Belt community, currently in process of gentrification by the medical behemoth.

Such as one project that—noting that the entire Main/High/Allen streets area is a food desert—would grow and supply fresh foods year-round for the medical and artistic communities and Fruit Belt residents alike. The building—proposed for the High Street property—looks a little like an enormous cruise ship of about 12 stories, each story set back from the story below, so that substantial perimeter areas would be exposed to sky and sun, and intensively farmed and gardened. Fruit trees and vegetables, and most or all of the farming and gardening to be performed on a part-time or hobby basis by residents in dwelling units toward the interior of the structure, but connected each one to a perimeter area growing space. The building becomes effectively a huge terraced agricultural project, like a Chinese rice paddies terraced mountain. The project would include a food market on the ground floor, and community kitchen with regular workshop instruction for residents and neighbors on cooking and preparing real food.

Another proposal, for the same location, is intended just for housing for medical personnel, with amenity features such as a meditation room and plentiful green spaces, plus a gym and a bathhouse, as means to alleviate some of the physical and psychological stresses of the residents’ pressure-cooker jobs. A rather limited-scope project, it would seem. Until one notices an accompanying graphic illustrating alarming numbers and increasing levels of clinical depression among medical professionals as they advance through their career: 12 percent for medical students, 25 percent for graduates, nearly 30 percent for interns, and above 30 percent for doctors.

Many of the projects feature significant gardening components, in open-air and greenhouse arrangements on rooftops and along perimeter areas of multiple levels of the various structures, and surrounding ground areas where possible. One—somewhat on the Kevin Guest House model—for short- or long-term stays by patient families and/or patients undergoing rehab—would allot gardening space to each resident for the duration of their stay. Another project, a limited-stay orientation facility for refugee peoples to the Western New York area, would provide gardens in part to allow residents to experiment growing foods they would be accustomed to from their previous homelands that might not be available in local markets.

Several projects are about intermixing heterogenous groups in the same residential facility. One about racial segregation, dedicated to including people of various races or ethnicities, implying radically different income levels, a factor as much or more associated with social segregation as race or ethnicity. Expository material with this project includes graphics showing average white income seven times average black income, and six times average Hispanic income. This is the project that asks the question can a building promote economic justice.

Imaginative architecture for visionary projects, sometimes verging on the impractical, or infeasible, or just plain unnecessary. Like the medical personnel “kinetic architecture” residence building with living spaces that can be readily contracted or expanded—that is, reconstituted as living spaces—at the will or whim of the resident. Kind of a Murphy’s Bed version of an apartment. According to the explanatory material, a resident could compact his or her apartment on leaving for work for the day, then upon return expand it again. Mind-boggling, and for what possible reason?

The architectural projects exhibit is slated to continue until February 16.