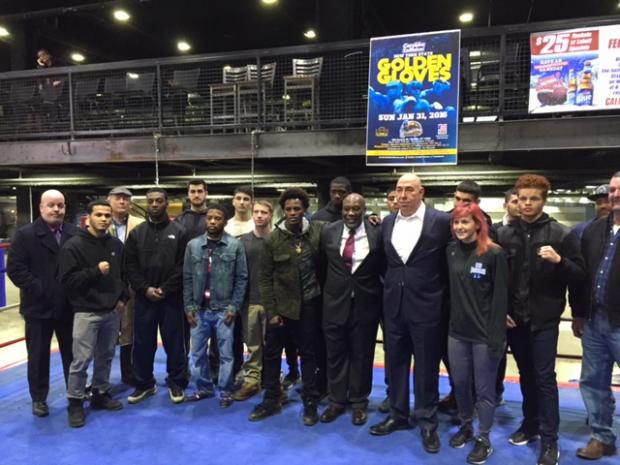 For Sunday’s opening round of the Golden Gloves tournament, there will be a raucous addition to the audience in the form of 30 students from Lafayette High School. As a sign of a nascent partnership between the school and the area’s boxing community, thirty students have been selected for free tickets. It’s one of the new principal’s many tools to get kids more invested in their school community.

Principal John Starkey instituted similar partnerships with gyms during his tenure as principal at International High School at Laguardia College. A Western New York native, Starkey cites galling statistics regarding Latino students in Buffalo: 85 percent are chronically absent, and only 5 percent of them graduate on time.

“We’re really excited to align with the Golden Gloves,” Starkey said, mentioning that for some students, participation in boxing gave them a reason to come to school. Though neither Starkey or Golden Gloves organizer and boxing trainer Don Patterson know how the partnership will work, Patterson and his Northwest Buffalo Community Center boxing club and West Ferry’s Westside Boxing are already on board.

Married to a Puerto Rican, Starkey said he knows how much currency the sport is lent in that island’s culture, and with a widening economic crisis in Puerto Rico, area schools are seeing an even greater influx of students.

“When I told the kids we might get a boxing club started where they could get some exercise at school, and then go over to the gym [after school] and train and maybe be a champ, they loved it,” Starkey said at a Wednesday press conference. “I told them they had to do what they have to do in school to get this opportunity. The kids have been great and the teachers have said they’ve seen a big change in them. We’re excited by this potential partnership.”

But as Starkey knows full well, interest in the sweet science isn’t exclusive to Latinos. Consider Lafayette grad Jeffrey Nygayot [Olingou]. A resident of Buffalo’s West Side since he was a toddler when his family moved from Congo, Nygayot is a Buffalo State College sophomore, studying business and French. Now under the tutelage of Teddy Hampton, Nygayot said he has taken his training to a new level, and has been getting more sparring in, touring Buffalo’s gyms for competition.

Nearby him during the press conference was UB Boxing’s Timi Akeredolu, who graduated last year from UB with a finance degree. Akeredolu showdown with the Juan Deleon-trained David Rivera might be the fight of the night, come Sunday. Fighting at 165 pounds, Akeredolu has a workman’s approach and has been building on his experience year to year in the Gloves. Rivera last appeared in the tournament in 2013, scoring an impressive knockout victory behind a cat-like assault of body-punching.

The opening round of the tournament is always the biggest draw because of the sheer amount of fighters. Twenty six boxing clubs will be represented by over 40 fighters from throughout Upstate New York facing off in three-round bouts of either two or three minute rounds, depending on experience. For the occasion, Patterson decided to break some new ground and book the expansive digs of the RiverWorks complex, with its adjoining ice rinks overlooking the Buffalo River and in the shadow of its grain elevators.

The connection between the Old First Ward and boxing was not lost on Patterson, who gave a shout out to two of the ward’s proudest sons, Jimmy Slattery and Irish Jackie Donnelly.

Speaking to the historical element of the tournament, the Gloves gained a new sponsor in MD Wood products. Michael Doktor decided to chip in to the cause to honor his father who passed away in the last year. “Nobody cared about him,” his son recalled the story of his orphan father. “He wound up in the Working Boys Home.”

The Working Boys Home was domain of Monsignor Kelliher, a larger-than-life figure in Buffalo boxing history. “That changed his life,” Doktor said. “He went in there with Monsignor, he boxed, he did the Golden Gloves; kept him off the streets. Made him a man. All he ever cared about was family and country. And he always put it back to boxing. The way he learned respect for people, the respect for community, and what the community gave him as an orphan. That’s what makes me want to give back to the Golden Gloves.”