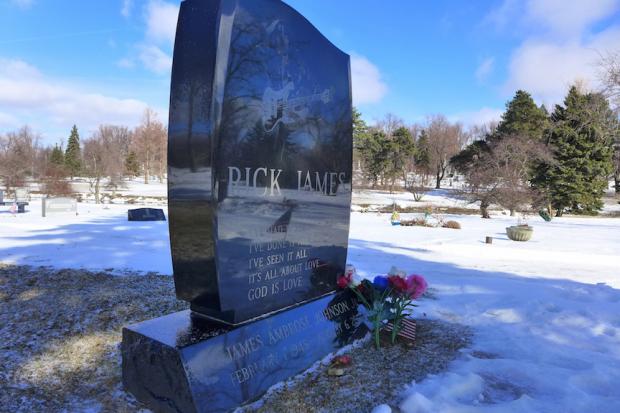 Woven into the musical lore of Buffalo is funk-rock innovator Rick James, whose birth anniversary is February 1. The infamous recording artist, some of whose ashes are buried in Section 10 of Forest Lawn Cemetery near Scajaquada Creek and Delaware Park, would be nearing 70 if he were still making music.

Section 10 is what a Forest Lawn employee refers to as “mixed,” with graves from the late 19th century to those that are more contemporary. Surrounding the headstone of Rick James is an area of graves festooned with lively holiday decorations and personal tributes: The James site, one of the most oft-visited in the cemetery, had at its base on a recent visit an assembly of small fan offerings of flowers, fruit and money. Also buried in this section are history-making American architect Louise Bethune, music-lover/producer Tim Switala, and the mother of former Buffalo Mayor Anthony Masiello.

Lots of people in Buffalo have Rick James stories. Mentioning his name may yield stories of sightings around Western New York, hazy nights at his Orchard Park residence, or raucous shows. My own sister has a Rick James tale: locking eyes and sharing a laugh with him while at a red light as a guy in a car behind James was flipping out and beeping his horn riotously upon spotting him in the car ahead.

The Public sat down with LeRoi Johnson, Buffalo attorney, artist, and younger brother of Rick James, on the occasion of the birthday of the “King of Punk Funk.” Rick James is creator of some of the finest dance floor classics that are aging quite well: “Cold Blooded,” “Super Freak,” and “Give It to Me Baby” haven’t lost a drop of their sexy bravado.

We also discussed a few Rick James projects in the works. LeRoi, 11 months younger (“We were Irish twins”), managed his brother (born James Ambrose Johnson, Jr.) and band “for the majority of his big days—1981-1992. Rick had a great run while I was his manager and we changed the face of black rock and roll, and black music.”

The brothers’ musical swagger and business savvy, created Mary Jane Productions in 1981, “one of the largest minority companies in the country with 70 employees in Buffalo, LA, and New York.” The company (concerts, publishing, artist management, and clothing–Funky Teaz) was the family business that wrestled more financial success for Rick.

Since his brother’s passing in 2004, LeRoi has been writing a memoir, about the audacious days before Rick’s “dark secret” of addiction and legal and health troubles overtook everything. There are two recent autobiographies and discussions about a possible biopic.

“Most people overlook the great things that he did and focus more on his sickness, which is drugs. They don’t look at the breakthrough, him fighting MTV to get all artists on there. If you don’t remember, it was a rock-and-roll station but there were no vehicles for others. We fought for it to open up to all music, and to satisfy us they created VH1. Once they created VH1 for all types of artists that took off and left MTV in the dust. So the next thing MTV had to do was catch up. That is Rick James and no one else.”

One of his working titles is Living in the Shadow of Rick James, and he read several chapters during this interview: It’s a thread of intriguing scenarios about backroom negotiations, overwhelming star power, and the Buffalo childhood that shaped the Johnson siblings. The legacy of Rick James is that of funk innovator, a Buffalo-born badass who had a street named for him on the East Side until the neighbors complained. (He’d never lived on Rich Street, and the mail got all confused.)