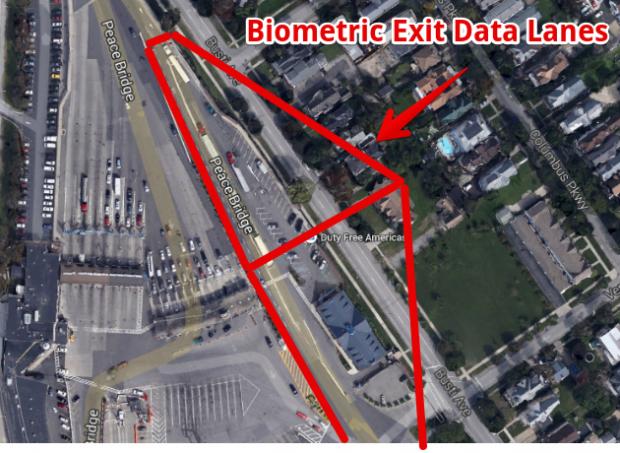 Need to make an IKEA run? How about a show on King Street, an exhibit at the A.G.O., or maybe just a really good pizza here, here, or here? You might want to knock things off your Ontario to-do list if Congressional Republicans get their way.

Although temporarily pulled for being too weak, the “Secure Our Borders First Act” (HR 399) would impose unprecedented restrictions on leaving the United States via our border with Canada.

In the wake of the 9/11 attacks, controls at the Canadian border were strengthened, and travelers were required to produce proof of citizenship in order to enter the US. The Western Hemisphere Travel Initiative was enacted to try and balance security and freedom to travel. A tattered birth certificate or simple driver’s license was no longer enough — now you need a Passport, NEXUS, or enhanced driver’s license. While arguably improving security, it added cost and time to crossing the border.

Congress’ latest idea is to require biometric testing — e.g., fingerprinting or iris scans — for people departing the United States via the northern border. Every person in every vehicle would be required to exit the vehicle and provide biometric information. As you might imagine, the impact that this would have on routine cross-border visits for business, tourism, or just shopping, would be catastrophic. It would quite literally shut the border down, and it would deal a devastating blow to the western New York economy, which relies heavily on Canadian shoppers and cross-border traffic for jobs and tax revenue.

The “Secure Our Borders First Act” is billed in national media as being a Republican slap at President Obama’s recent executive action on immigration. But the affect on the Canadian border isn’t some inadvertent accident — it was a deliberate amendment brought forward by freshman Republican congressman from Syracuse John Katko. As the Finger Lakes Times reports,

Newly seated Rep. John Katko wants the nation’s northern border to get the same attention as the one down south. Katko, R-24 of Syracuse, introduced legislation last week to require the Department of Homeland Security to conduct a northern border threat analysis. The bill is Katko’s first since he took office earlier this month.

“As a former federal prosecutor on both the northern border in New York and the southern border in El Paso, Texas, I’ve seen first-hand the issues our nation faces countering drug trafficking and potential terrorist acts,” Katko said in a press release. “While great attention is justifiably given to the challenges of securing our southern border, ensuring the safety of our vast northern border is critical to our nation’s security.”

Katko’s district includes the Lake Ontario shoreline in Wayne, Cayuga and Oswego counties, which is part of the international border with Canada…Katko said he also added an amendment…to the Secure Our Borders First Act authoriz[ing] the deployment of the same type of technology and resources on the northern border as it does for the southern border.

The Secure Our Borders First Act also includes the language from Katko’s stand-alone bill. “I’m committed to enacting tough border security to ensure the safety of upstate New York and the sovereignty of our nation,” Katko said. “Requiring timely assessment of the threats posed by illegal entry on both the northern and southern border, and adequately responding to those threats, is crucial to making that happen.”

The Secure our Borders First Act would allocate $10 billion for border security. It has come under fire from both sides of the aisle, with some Democrats arguing that it does not offer real solutions and some Republicans arguing that it represents a prelude to amnesty.

Add to that criticism the fact that this is a fundamentally idiotic, pointless, and harmful piece of legislation. You picked a doozy, Syracuse. Requiring biometric testing upon departure from the US would require the construction of inspection booths on the outbound lanes.  Requiring every occupant of every vehicle to exit and provide biometric information would be time-consuming and accomplish absolutely nothing.  Every effort to better integrate the WNY economy into that of Southern Ontario would simply vanish. Erie County sales tax revenue from Canadian shoppers would plummet and put more pressure on WNY taxpayers.

Rep. Brian Higgins, D-Buffalo, predicted that people would simply stop crossing the border because of the biometric testing provision, which would require the government to take fingerprints from or do iris scans of everyone in every vehicle leaving the country. “This job-killing bill would effectively close the northern border and cripple key components of the U.S. economy, including manufacturing,” Higgins predicted.

When Rep. Higgins offered an amendment delaying biometric implementation until Homeland Security could determine whether it would impede border traffic, Republicans shot it down.

Republicans on the committee defended the measure, saying biometric tests at the border would go a long way toward securing it by giving the federal government a way of checking which foreign visitors had overstayed their visas. Currently, foreigners who travel to the U.S. from many countries must have a visa, but there is no system in place to discover when they have overstayed those visas. The biometric inspection system would create that system by giving the government a way of cross-referencing biometric exit data against the list of visas the government issued. Some 49 percent of the undocumented immigrants in America simply overstayed their visas, rather than entering the country illegally, said Rep. Jeff Duncan, R-S.C. “This would give us a way to eliminate almost half the illegals that are in this country by knowing when they left and when they did not,” said Duncan, who noted that four of the hijackers who perpetrated the attacks of Sept. 11, 2001, had overstayed their visas.

There’s no exception made for citizens of Canada or the US, who don’t need visas to visit each other’s countries. Because a small percentage of visitors to the US on tourist visas stay longer than they’re allowed, we will effectively shut down the Canadian border. This is bad government, and it introduces exit controls rivalling what the Warsaw Pact countries concocted pre-1989.

It’s also a breach of contract with the Canadians, and completely unnecessary. The US and Canada share information on who is crossing the border. When you enter Canada and the agent takes your passport, that information is transmitted to the US, and vice-versa. We don’t need to construct a new infrastructure and biometric testing to secure the Canadian border. When did we abandon that careful balance between security and liberty?

…the provision appears to violate the spirit, if not the letter, of the “Beyond the Border” agreement between the U.S. and Canada, which aims to make crossing the border easier, not harder. What’s more, the Beyond the Border agreement appears to offer the U.S. a way of knowing who is leaving the country without installing a new biometric inspection system. “The Beyond the Border Action Plan committed Canada and the U.S. governments to put in place entry-exit information systems at the common land border to exchange biographical information on the entry of travellers, including citizens, permanent residents and third-country nationals,” said Christine Constantin, spokesperson for the Canadian embassy in Washington. “The system would allow a record of entry into one country as a record of an exit from the other.” Currently the system exists for exchanging data on third-country nationals, permanent residents of Canada and lawful residents in the United States at all automated points of entry, Constantin said.

Our local Republican Congressman, Chris Collins has absolutely nothing definitive to say about any of this.

…while he thinks the nation needs tough legislation to crack down on illegal immigration, at the southern border, he has concerns about the biometric inspection requirement. “If implemented wrong, this could potentially create problems for the Western New York economy,” Collins said. “So, I will be working with my colleagues to protect Western New York from any negative economic impact.”

Potentially? This is a WNY killer. How could this be implemented “right”?

When the bill was pulled, the Buffalo News noted that Collins proposed an amendment not dissimilar from Higgins’ own.

Under Collins’ proposed amendment, the requirement for biometric tests would not move forward until after completion of a demonstration project aimed at testing whether the mandate would create traffic chaos. Collins’ measure would mean that the biometric requirement would move forward only if it “has not resulted in increased wait times at any border crossing that was participating in such pilot program.”

Calling himself a “doubting Thomas” on the proposal, Collins said: “What we want is just to make sure that anything we do, number one, works, and number two, doesn’t cause undue delays at our northern borders and for folks coming to Bills and Sabres games and going to the Galleria mall. We can’t have backups at the Peace Bridge or Rainbow Bridge or any of the others that would dissuade Canadians from coming into this country and also inconvenience Americans.”

It was never introduced because the GOP pulled the bill, but while Collins gives himself credit, the real reason might have to do with ultra right-wing Congressmen from the deep South believing the whole thing is too milquetoast. If you tend to believe in conspiracies, it might be reasonable to suppose that this whole thing is designed deliberately by Republicans to do harm to blue border states like New York.

Asked about Collins’ alternative, Higgins said he was concerned that the results from any biometric demonstration project might not tell the story of what would happen at every border crossing. “This doesn’t take into account the fact that every single border crossing is different,” Higgins said. A spokesman for Collins said, though, that the legislation calls for three demonstration project sites rather than just one, meaning that problems could well surface somewhere during the testing. Higgins also noted that the biometric requirement appears to be redundant at the Canadian border, as the U.S. and Canadian governments have agreed to exchange exit and entry information about travelers as part of their “Beyond the Border” initiative to make border crossings easier. “Why isn’t that being taken into account?” Higgins asked. “Is it ignorance? Is it arrogance?”

Higgins hits the nail on the head. This proposal is completely pointless. It adds an unduly restrictive anti-immigrant act to our grand security theater.

As I argued in this article, we should be making our border with Canada work smarter and better. Restricting the market for labor, goods, and services is silly, and there are ways to free up cross-border traffic while addressing security issues.

Requiring every occupant of every IKEA-bound and Galleria-bound vehicle to provide fingerprints or an iris scan upon exit from the United States is pointless, redundant, theater, expensive, and would reverse and devastate WNY’s fragile and tentative economic recovery. I can understand how some throwback fascist southern xenophobe might decide that exit visas or fingerprinting might be a great idea for the Canadian border, but we’re talking here about New York congressmen who should know better than to destroy their own districts.

The text of the bill where Congressional Republicans seek to ruin the western New York economy is here. To call it a disgrace is a collossal understatement, and the only one who gets it is Congressman Brian Higgins. Your liberty and wallet are under Republican attack.

(Side note: the voters in NY-26 dodged a huge bullet last year).