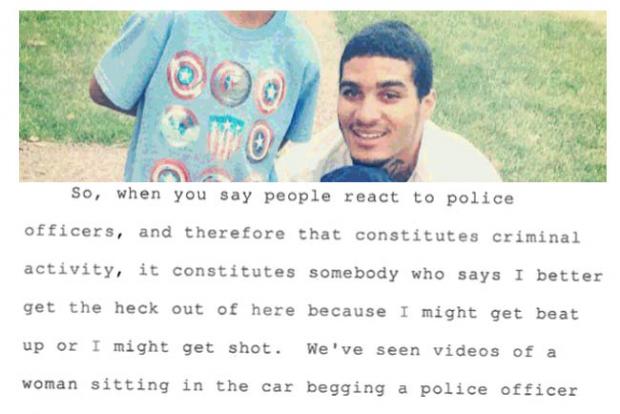 Arthur Jordan Jr. was stopped and searched under Constitutionally questionable circumstances last July, and when he was searched police found an illegal firearm in his pocket.

There was no warrant against Jordan and no 911 call made about his presence with two other men on Main Street. He was seen from a distance by officers in the city’s Strike Force unit. About a week prior, when online furor over the Alton Sterling and Philando Castille killings was at its peak, Jordan had posted a message on Facebook calling for violence against police: “Let’s Start Killin Police See How Dey Like It.”

When the FBI let it be known that Jordan was wanted for questioning, officers on Strike Force who were familiar with Jordan kept their eyes peeled. A large part of their mission is to target gang activity and get guns off the streets and he was often seen in the Central Park neighborhood, where he grew up, according to family members.

The Facebook post led to federal charges, and a hearing was held in December in US District Court as the defense moved to suppress the evidence of the firearm by arguing that the stop and arrest itself were unconstitutional.

During the hearing, US Magistrate Judge H. Kenneth Schroeder sharply questioned the government’s argument that police had “reasonable suspicion” that criminal activity was afoot.

The transcript of that hearing covers some key themes around law enforcement as it pertains to national trends of police violence, the treatment of minorities, and Department of Justice and state-level findings of Constitutional and civil rights violations in police departments all over the country. At its heart, the case questions what it means to be perceived as a gang member, and how that alleged affiliation defines one’s treatment by police.

The entire transcript is below. The first 50 pages consist mostly of US attorney Wei Xiang’s examination of Officer Michael Acquino, and then public defender John Humann’s cross.

On page 50, Judge Schroeder begins poking holes in the Xiang’s argument and it quickly escalates. The transcript reflects that Schroeder interrupts Xiang eight times in the successive pages and they argue over the merits of the arrest, and in fact when and if the arrest even occurred.

And then on page 71, Schroeder pivots and begins making the argument that African Americans have a right to fear the police based on what’s happening in the country. As Xiang attempts to explain that Jordan’s alleged affiliation with the Central Park Gang, and the alleged affiliation of the two men in Jordan’s company that day as a basis for suspicion, Schroeder continues to get frustrated.

After Humann put on the record with Hamilton’s testimony that Hamilton put on black gloves as he was entering the store (page 85), Schroeder goes on to defend Jordan’s actions, mentioning both the recent police abuse trial in Buffalo and the Philando Castille video.

The case has yet to be decided. Attorney briefs are due by February 7.

USA vs. Arthur Jordan by aalowinger on Scribd