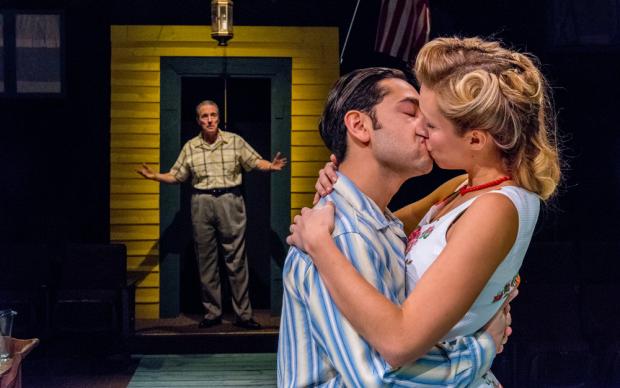 Peter Palmisano, Anthony Alcocer, and Candice Kogul in All My Sons. Photo by Gene Witkowski.
by
Douglas Levy
/ Jan. 27, 2016 3am EST

On the dome over the banking floor of the Fountain Plaza branch of M&T Bank (the building originally was Buffalo Savings Bank) are painted these words: “VIRTUE is the ROOT and WEALTH is the FLOWER.” This paraphrase of an aphorism by Confucius directs that a prince must have those characteristics of virtue, namely rectitude and justice, courage, benevolence, politeness, veracity and sincerity, honor, loyalty, and self-control, in order to accrue wealth and pleasure. This dictum tragically is lost on Joe Keller, the protagonist in Arthur Miller’s award-winning 1947 play All My Sons, currently running through February 7, 2016 at Irish Classical Theatre Company. Performances at the Andrews Theatre, 625 Main Street, are Thursday through Saturday at 7:30pm with matinées on Saturday 3pm and Sunday at 2pm. (Tickets: 716-853-4282 or online a www.irishclassicaltheatre.com.)

All My Sons is about the sins of the father visited on his sons, families torn apart, and the questionable morality that is at the heart of capitalism. Joe (played by the ever easy-going Peter Palmisano) ran a foundry with his former partner, Steve Deever, who is serving time for selling faulty cylinder heads to the Army during the Second World War. These engine parts were determined to be responsible for nearly two-dozen fighter aircraft crashes that took the lives of the young airman who flew them. Joe escaped prosecution and profited well during the war, but his family suffered the loss of the older son Larry, whose death his mother Kate (the haunting Josie DiVincenzo) cannot accept. Convinced Larry will someday return, she refuses to abide by the deepening relationship between her other son Chris (the earnest Anthony Alcocer) and Deever’s daughter Ann (the poignant Candice Kogul) who was Larry’s girl.

The play opens with an uneasy truce among these principals: Joe lives without any sense of responsibility or culpability in the fraud and profiteering that sent his business partner to prison. Chris, who returned from war with an irreconcilable guilt over the lost lives of the company he commanded, is ashamed of the “loot” that his father profited by. Kate’s fixation on her missing-and-presumed-dead son has as much to do with her inability to accept reality on the one hand, and her need to continue the charade of Joe’s innocence on the other.

The Kellers have become pariahs in their small, average American town, with neighbors, like the astrology-obsessed Frank Lubey (the wonderfully manic Rich Kaemer) or the philosophical Dr. Jim Bayliss (the forthright John Profeta), who sadly understands the grasp money holds on people, particularly his wife Sue (the scarily demanding Lisa Vitrano.) The tacit agreement among all these people to accept Joe’s version of events is shattered by the arrival of Ann’s brother George Deever (the intense Chris Kelly), who has just come from his father’s cell and is convinced that Joe is just as guilty, if not more so, than his father. The revelations and admissions in the last act not only destroy the false peace Joe has enjoyed at the expense of the truth, but shatter both the Keller and Deever families, laying to waste the lives of even the innocent.

There is not a false note in any of the performances of this remarkably fine cast, deftly directed by Greg Natale, who zeroes in on the smoldering anger at the core of Arthur Millers perfectly wrought drama.

Miller’s theme of the inevitable corruption of the individual by capitalism—the “prince” of industry who lacks the virtues of integrity, honesty or honor and therefore cannot resist the ends justifying the means imperative of saving his company—is with us still. We only have to witness General Motors’ ignoring a faulty ignition switch, Massey Energy’s cutting safety corners that precipitated the Upper Big Branch Mine disaster, or Wall Street’s avarice as seen in both sub-prime mortgage scheme and subsequent defrauding of investors encouraged to buy credit default swaps that the banks knew were worthless, thus precipitating the deepest recession since the market crash of 1929. Miller’s play is a tragedy for the characters, and a cautionary tale for the rest of us: Attempting to acquire wealth without being a virtuous person yourself is a falsehood and inevitably will deny you the wealth and happiness you seek.