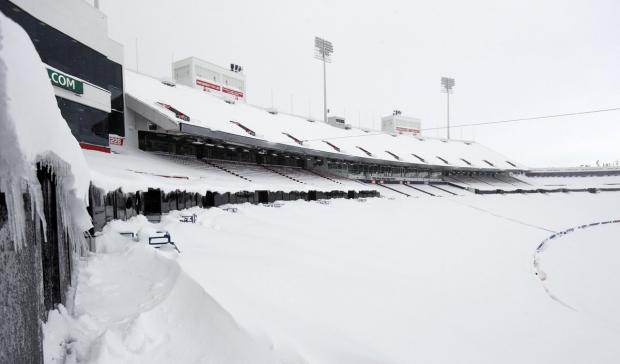 As a taxpayer of Erie County and of New York State, you are already committed to paying for $100 million of the $130 million in upgrades just purchased for the Ralph Wilson Stadium in Orchard Park. Unless Erie County and New York State finances grow so vastly that that that debt is wiped out and there is a new source of revenue to fund the public portion of the next stadium construction project, chances are there will be no downtown stadium for the Buffalo Bills.

This isn’t pessimism: It’s a genuine policy problem. We know that there is considerable public sentiment for keeping the Buffalo Bills NFL franchise. We know that the NFL enjoys considerable political support because of the popularity of its entertainment product. We also know that the available pool of discretionary disposable income in the Buffalo-Niagara Falls metro area is considerable—this is, notwithstanding the fact that about two-thirds of households report less than $50,000 in annual income, a pretty big regional economy, with well over 500,000 working adults and over $46 billion in regional gross domestic product. Football is about a $300 million annual industry here. Without professional football, that $300 million would still happen; entertainment dollars still get spent, as economists note, in the substitution effect. What you don’t spend on one diversion, you’ll spend on another, similar diversion, rather than on donations to charity or on $250 bottles of Chateau Haut-Bailly.

But the problem remains: Unless and until private interests entirely pay for a new stadium, taxpayers have paid, and paid again, for the existing one. And even then, some rationale would have to be found to abandon a publicly owned facility that currently requires annual debt service to all those investors who have loaned Erie County and the State of New York $100 million.

And then there’s the reality of stadium financing in the US. Any new stadium would come with a very large public price tag. In all 32 of the cities that have National Football League franchises, there are only two—San Francisco and the Meadowlands in New Jersey—where private dollars are the main source of funding. In every other franchise location, the public funds between 25 percent and 100 percent of the cost of the stadium. In Minneapolis, the City of Minneapolis is on the hook for $180 million, the state of Minnesota is on the hook for at least $600 million, and the National Football League will also be a part of what has been estimated to be a nearly $900 million new stadium for the Minnesota Vikings franchise. In St. Louis, the community had vastly expanded the stadium the Rams play in, and had not finished paying for it before the NFL franchise, and its many allies, demanded, and got, a massive infusion of new public funds for a better stadium. And this still hasn’t stopped owner Stan Kroenke from planning to build the Rams a new stadium in LA.

But of course, politically empowered private interests want a new downtown stadium. Many football fans want it. Urbanists want it.

Make no mistake: A downtown stadium, like a downtown university, would have been a far more positive choice for the Buffalo metro economy had more sensible thinking prevailed in the 1970s, when the decisions were made to site the stadium in Orchard Park and the university in Amherst. The problem is this: No matter how strong the economic case for acquiring and demolishing existing downtown structures to accommodate a relocated major-league football stadium or a major research university, there is a budgeting reality. Outstanding obligations have to be paid off.

Will they be? Erie County’s current comptroller, Stefan Mychajliw, issued a report in 2014 that succinctly stated the current obligation. Erie County is on the hook for $40,654,000 of the bonds issued to cover the $130 million renovation of Ralph Wilson stadium. New York State issued $53,891,000. The Buffalo Bills franchise, together with the National Football League, committed $35,455,000. The funds have been spent. Taxpayers now pay the annual debt service for improvements that have largely been completed.

In other words, even before counting the subsidy for stadium improvements, Erie County taxpayers annually were paying more for the Buffalo Bills than for all the county parks, museums, and various other cultural and recreational amenities in the county budget.

The new report on stadium siting included one option that downtown enthusiasts dislike: a further refurbishment of Ralph Wilson stadium, to the tune of almost $600 million, compared to a new downtown facility that would price out at between $700 million to $1 billion.

So if there is a new downtown stadium, would taxpayers just eat the $100 million?

The answer: yes. On a per capita basis, the 919,866 people of Erie County owe $108.71 apiece for the new upgrades to the Ralph Wilson stadium. If the public pays half of the cost of the new $1 billion stadium, citizens here will pay about $700 apiece, plus their share of the annual subsidy.

Would it be better downtown than where it is? Sure. Will having the Buffalo Bills franchise downtown wipe out the need for an ongoing taxpayer subsidy? Well…the word “need” here is an interesting one. Will the presence of a 20-event-a-year stadium add to the vitality of downtown? Yes, unquestionably, incrementally, but not without creating costs, and not without raising expectations that probably cannot be met. Will the community have squandered $130 million in the meantime?

You know the answer.

Meanwhile, the next time political leaders are faced with a question of whether to fund a public amenity, diversion, cultural activity, or long-term public investment, before public officials say no, one hopes that the $100 million question is asked: what was the community benefit?

Bruce Fisher is visiting professor of economics at Buffalo State College and director of Center for Economic and Policy Studies.