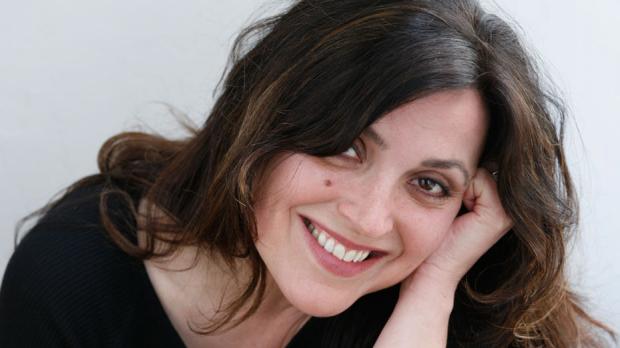 Now appearing at the Alleyway Theatre as Mrs. Robinson, the cougar to define all cougars in The Graduate, Constance Caldwell has had an eclectic stage career. Her stage roles are infrequent, but my most vivid theater memories include the unlikely appearance of gorgeous Ms. Caldwell as the unattractive daughter in Federico Garcia Lorca’s The House of Bernarda Alba; a Christmas revue with Josephine Hogan in which the two sang a dopey rendition of the oh-so-dopey “Oh by Gosh by Golly” that is permanently imprinted in my brain; and as “Lovely Rita Meter Maid” in the Beatles jukebox musical Sgt. Pepper in the Park.

By day, the Buffalo State Theater alumna is the Director of Communications and Community Engagement for the Buffalo History Museum, and never wastes an opportunity to spread good will for that venerable institution. She is also known for her enduring beauty, her spectacular vegetable garden, and her blissful marriage to jazz musician George Caldwell. As Mrs. Robinson, Connie gives a deliciously restrained performance, grounded in a perfect foundation of dry and cynical humor. Alleyway’s production of The Graduate, directed by Todd Warfield, has imbued the story with an element of giddy effervescence—the secondary characters are played as delightfully silly cartoons who whirl around the dilemma of Benjamin, a young man whose interaction with a predatory older woman will alter the course of his life.

What word would your friends use to describe you?
Depends on which friend you ask, but the one word I’ve heard the most: solid.

What quality in your current character is most unlike your own personality?
She is bored by her bourgeois life; whereas, I am excited by my earthy creative life. She makes some self-destructive choices that I never would. In the context of the book and script, I’m about 14 years older than Mrs. Robinson.

What quality in your current roles is most like your own personality?
We both know the power of our presence and we’re A-okay with it.  I have lived through some personal dark times that help me understand Mrs. Robinson’s enigmatic detachment. We both look great in jewels.

When and where were you the happiest?
If I could choose one superlative moment, I’d be happy to tell you and I’m sure it would be entwined in family related joy.

What is your idea of hell on earth?
Being stuck in close quarters while an idiot cell phone conversation goes on and on about nothing.

What is your greatest fear?
My fears are unpredictable even to me. At times the butterflies in my stomach are merely feed for raging pterodactyls over seemingly insignificant matters.

Which talent do you most wish you had?
I wish I could write, really write.

What superpower do you most wish you had?
I wouldn’t wish for one. I’d be afraid of the responsibility. But if I could manipulate time to undo the times I hurt someone, or was a jerk, I’d like that power.

What would you change about your appearance?
Well, I am running around on stage in my underwear and “nudie panties” so I’d have to say I wouldn’t mind my former firmer self back for the next few weeks. Longer legs would be a bonus!

What trait do you most dislike in others?
Obviously, deliberate cruelty is unforgivable as Blanche DuBois would attest. But in everyday life, I don’t like pushy people.

What do you most value in your friends?
Their diverse interests and their desire to share them with me.

What quality do you most value in a good director?
Vision; and, in Todd Warfield’s case, I’d add, guts. I’m rarely on stage, this show will mark my biggest professional role. Todd trusted his instincts in casting me.

What is your guilty pleasure?
Watching Judge Judy. I love her!

Who is your favorite fictional hero?
Scarlet O’Hara and Cat Woman.

Who is are your real-life heroes?
People with real struggles in their lives that still manage to be decent human beings and find dignity in their work will always get my full-blown admiration.

What do you consider to be the most overrated virtue?
It depends on the situation. But to those who sit at their computers sharing virtuous memes about self-love and “just do it” affirmations: What a crock of you-know-what.

On what occasion do you lie?
I’m a publicist for God’s sake! But seriously, I will lie to protect my privacy and that of others.

What was the subject of your last Google search?
I Google search many history museum related things for work, but I’m sure by the time The Public hits the stands it will be for this article. Is it a sin to Google oneself?

If you come back in another life, what person or thing would you like to be?
I wouldn’t mind coming back as me with a photographic memory and with wiser voices in my head.

What role, in which you will never be cast, is perfect for you?
Serafina in Tennessee Williams’ The Rose Tattoo. Masha in Anton Chekhov’s The Three Sisters. Anna in Eugene O’Neill’s Desire Under the Elms. Queen Constance in Williams Shakespeare’s King John. Lady Macbeth in Shakespeare’s Macbeth

What is your motto?
“Keep your powder and your pants dry” (Parenthood). But the motto I have been chanting lately for The Graduate and in playing Mrs. Robinson: “You are enough.”