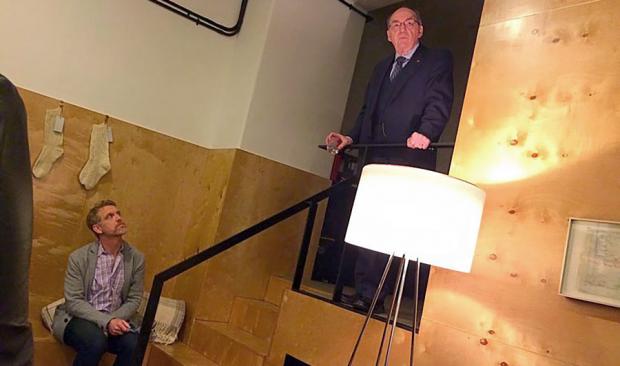 Art is the flower. Life is the green leaf. Let every artist strive to make his flower a beautiful living thing, something that will convince the world that there may be—there are—things more precious, more beautiful, more lasting, than life itself.

Several dozen folks of different backgrounds and talents but like-minded about wanting to make Buffalo a more beautiful place wherein to live and work got together last week at the Manuel Barreto Furniture atelier and showroom, on Delaware Avenue near Virginia, to introduce themselves and talk about how to go about it.

It was the initial face-to-face meeting of a loosely organized group called Design Block. (Versus meeting on Facebook, where the conversation has taken place over the past months, and will continue to take place, but now in conjunction with possibly bi-monthly in-person meetings.)

The main speaker was Eddie Friel, director of the Niagara Global Tourism Institute in Niagara Falls, an Irishman by way of Scotland—Glasgow—with a knack for branding. His previous project was to remake the image of Glasgow from a down-at-the-heels and disheartened post-industrial city—Glasgow was the shipbuilding center of the British Empire in the heyday of the Empire, more ships were built there than in any other place in the world—to vibrant and vital again, not by resuscitating the old industrial basis but by focusing on hidden or obscured historical strengths, with a particular emphasis on design. In the case of Glasgow, focus on modernist design titan Charles Rennie Mackintosh and the Glasgow School of Design, of which Mackintosh was the key figure at the end of the 19th century, early part of the 20th. Friel said he came up with the promotional slogan “Cultural Center of Europe” for Glasgow, which he said raised some eyebrows in wonderment, “and Edinburgh didn’t like it,” but somehow it stuck, and Glasgow has a new and shining image these days.

The comparison to Buffalo was obvious. In terms of where we’ve been and where we want to go. The industrial economic base that’s no longer present and won’t return. And the manifest historical aesthetic character and qualities of the City of Buffalo. The Frederick Law Olmsted plan and nonpareil park system. The architecture. (Next door to the Manuel Barreto building is the old William Dorsheimer mansion, designed by the great Henry Hobson Richardson, who also designed the old insane asylum on Forest. But also Louis Sullivan and Frank Lloyd Wright buildings. And treasure trove of industrial remnants, and vernacular residential structures.)

Buffalo could do what Glasgow has done, was Friel’s message. The other speakers—briefly—were Pedro Manuel Freire and wife Christina, proprietor team of Manuel Barreto. He is from Portugal, she is from here, but has Portuguese family. They met in Portugal, where Pedro was studying architecture and working in architectural offices, but decided to relocate to the United States and Buffalo, where the idea was to start a furniture design business. “We had no money,” Pedro said, “but one thing I have learned, everything is possible.” They have been in Buffalo for two years, and “Buffalo is perfect,” Pedro said. In addition to his furniture, some of which is on display in the showroom, he is completing a redesign of an apartment in the St. Mary’s building on Elmwood and Virginia, “opening it up, making it airier, lighter, brighter, and making more of a path through a living space, more of a story,” he said. And will be doing one of the rooms of the next design showhouse, on Lincoln Parkway, next to the Albright-Knox.

The rest of the evening was schmooze. When I asked Kevin Hayes, a board member of The Foundry on Northampton Street and a Design Block participant and partisan, about the purposes and goals of the group, which the brief talks had not gotten much into. To foster good design in all aspects and facets of the built environment, was how he explained it. “Looking around,” he said, “we see a lot of bad architecture and urban design, and want to make it better. Want to promote better.”

Particularly right now, when Buffalo seems to be undergoing a renaissance. Which could turn out like the Glasgow version. Maybe even like the Florence version. Or could turn out just a building boom.

Among the crowd, many not yet participants, it seemed, who had heard somehow about the Manuel Barreto meeting and showed up. Curious. Like Roland Coleman, a principal at Cannon Design, in charge of school facilities planning, grades pre-K to 12. He was positive but skeptical. “As with many noble ideas, the persistence and gravitas to make it all happen is beyond daunting,” he said. “But that’s the essence of the design profession. We look and live for those challenges.”

Elizabeth Samuels, who runs the Indigo Art Gallery on Allen Street, said she thought the Friel talk in particular was “inspirational.” Asked if she was a member of the group, she said, “I’m not sure what it means to be a member.” She said she’d look into the Facebook site.

Further face-to-face meetings may be at other locations, or may be at Manuel Barreto. The ambience was right. The atelier and showroom doubles—triples—as an art gallery. Along one wall that night, a series of Pedro’s beautiful drawings of Buffalo architectural structures and scenes. Along another other wall, a series of photos by Irene Haupt. What she calls “memory” photos, consisting of layered negatives with imagery—often nature imagery—recalling personal life events, time periods, places. And additional element strand of red yarn “life line,” she said. Clotho, Lachesis, Atropos.