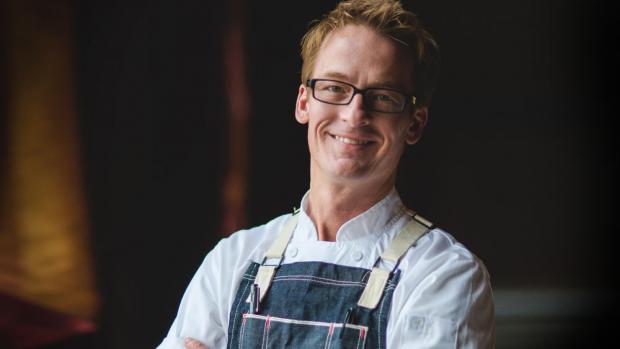 Chef Bruce Wieszala is a local guy with a Southern twist—he learned how to home-make Polish staples with his mom in Buffalo before learning how to cook professionally in Atlanta. He spent two years at Tabree before restauranteur Mike Andrzejewski lured him to his new Hotel Lafayette restaurant, Bourbon and Butter, in September. Wieszala’s knowledge of both Southern cooking styles and local tastes has been perfect for the new restaurant. Here he dishes about how he cooks.

What are your early food memories?
Mom always cooked dinner for us every night, even though she had a full-time job. I was always in the kitchen helping her. People ask me what my last meal would be—I would definitely say my mom’s chicken soup. She did everything from scratch—potato dumplings, pierogi, duck’s blood soup.

How did you get started in the food business?
I didn’t go to culinary school. I have a background in mechanical engineering and design. But I wasn’t thrilled with my job—I was stuck in a cubicle nine hours a day, and it wasn’t a good outlet for creativity. When I moved to Atlanta [in 1999], it was an opportunity to learn different things.

My first actual cooking job in Atlanta was the Cheesecake Factory, and I really kind of fibbed my way through to get that job. Then Emeril was opening a restaurant in Atlanta, and I applied for that. Later I worked with some great chefs—at Restaurant Eugene for Linton Hopkins, Seeger under Guenter Seeger, and for Mike Tuohy at Woodfire Grill.

What brought you back to Buffalo?
My parents were older, I’m an only child, and they needed help. They’ve both since passed away. But I’m happy I moved back.

What did you think of the food scene after your return?
It was a little disappointing at first, but it definitely progressed within a couple years. We’ve got a lot of really good talent. It’s a matter of the general public catching up and have a little faith in what we do as opposed to chain restaurants. Try some of these new places that talented new chefs have opened up.

Tell us about Bourbon and Butter.
Of course, all the food there is really good. It’s a mix of high-end Southern comfort food and little Mediterranean and Asian touches. The space is gorgeous, with high-backed banquettes. It really exudes that Art Deco feel of the hotel. I’m glad Rocco [Termini] had the foresight to renovate it.

Tony [Rials] behind the bar is a great cocktail chef. I never actually order anything off the menu—I just let him do whatever he feels like doing, and it always works out. He’s got a great palate for cocktails.

What dishes are you excited about?
If you look at Bourbon and Butter’s menu, the appetizers are a little more adventurous than the entrees, but that’s good. It gives people room to try more new things.

The chicken liver brulée appetizer starts with a paté, and then the top is bruléed like a creme brulée, with a nice crisp layer of sugar on top.

The smoked pork belly is a great dish. It’s a familiar concept—breakfast—but a little more high-end, a little more polished. A lot of people are surprised when they crack open the egg and it’s runny on the inside. Basically it’s a poached egg that I dredge in egg wash and bread crumbs and then deep-fry. The hash has some truffle in it, and I finish it in maple vinaigrette.

The fettucine carbonara is an authentic carbonara—it’s a handmade pasta, and I make the pancetta. I’m going to be trying a full charcuterie board in the next couple months, too, with housemade pickles and mustards to go with it.

What tips do you have for home cooks?
People are so used to picking up boneless skinless chicken breasts and center-cut pork chops with all the fat trimmed off. There’s a whole animal attached to that, with so many other parts that people neglect, like ham hocks and pig’s feet. There’s so much that’s inexpensive and really tasty.

Pig ears we braise in vegetables and stock for three hours, slice cool, dredge them in seasoned flour, and deep-fry—that’s it.

For chicken livers, I cook them with onions and fresh herbs. I deglaze the pan with brandy, add a little cream, add salt and pepper, and then I puree in a blender. Chill it in a shallow tupperware and spread on toast or crackers.

Always salt and taste your food, too. I would say 80 percent of home cooks don’t season and taste enough.