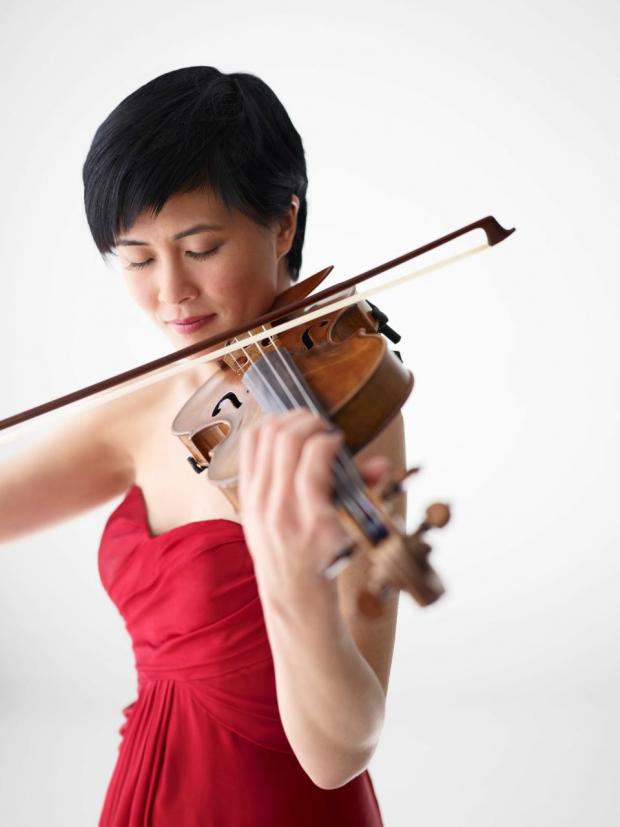 Jennifer Koh (b. 1976 in suburban Chicago), a violinist noted for her intense and commanding presence, dazzling virtuosity, and technical assurance, performs Thursday evening, January 29, at 7:30pm in UB’s Slee Hall. A Curtis graduate and Tchaikovsky Competition winner, she is in demand internationally, performing the 19th- and especially 20th-century concerto repertoire. But she has devoted much of her time to recitals, including a series she calls “Bach and Beyond.” She’ll present “Bach and Beyond 3,” a program she’s been touring during recently, which raises expectations of an emotional level of music making that only comes from repeatedly penetrating performances of works by Bach, Berio, and Zorn.

John Zorn (b. 1953 in NYC) in the words of biographer Thom Jurek, is “a quintessential mirror of the 21st century culture…[eschewing] genre purity while being a prolific avant-garde composer, saxophonist, film scorer, and musical gadfly of international renown.” Initially an alto sax player of the Free Jazz ilk, he merged his influences from the downtown New York scene of the early 1970s into a compositional style that has produced a prolific steam of work for nearly 40 years. Passagen (Passages), from 2013, presents Zorn’s free, humorful edginess that is shaded by Neo-Romanticism, with sure technical understanding of the instrument. The last 60 seconds of this roughly 14-minute work has the violinist playing a note so high as to be nearly inaudible.

Luciano Berio (Italian, 1925-2003) holds an uncontested place of importance in the world of avant-garde music. He was equally adept at writing music for the human voice or electronics that was also communicative and pleasing to audiences. His Sequenza VIII from 1976 is, in the estimation of Robert Kirzinger, “a work ‘about’ that most history-laden of instruments…[a] repayment of a ‘personal debt’ as well as an homage to Bach.” Bookending these pieces are works of J. S. Bach (German, 1685-1750), drawn from the six Sonatas and Partitas he composed during his years at Cöthen. His employer there, lacking a serviceable organ or an interest in religious music, created the opportunity for Bach to write the bulk of his sublimely marvelous instrumental works, including the Solo Sonatas in A minor and C Major that are the lodestones between which Ms. Koh will make profound and delightful connections to the Berio and Zorn.

Tickets are $10 for members of the UB community and $15 for the general public.