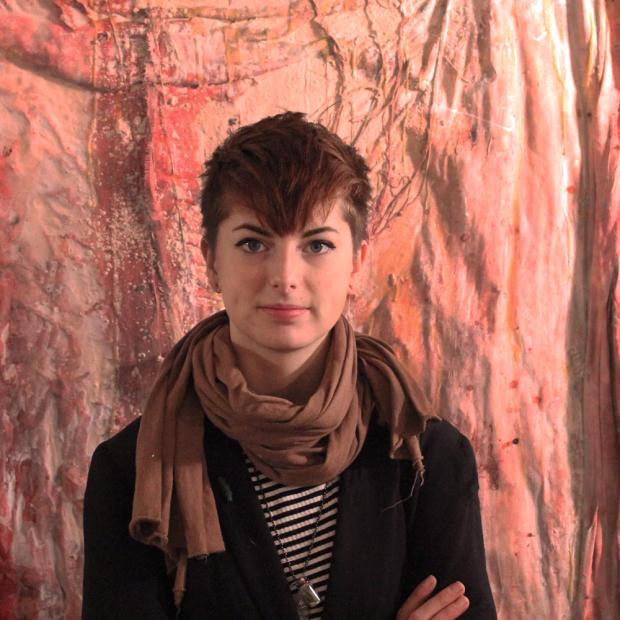 Jaime Schmidt learned about using art as an emotional channel out of necessity. As a kid growing up in nearby Holland, New York, she faced unusual challenges, including a perpetually ill father who has survived—among other ongoing maladies—a series of six strokes.

“I grew up in a difficult situation, and I’ve was never able to find someone my age who could relate,” she said during a break from mounting her current show, entitled Magnified Alleviation, at the Tri-Main Center. “My dad has been sick my whole life, and there was some domestic violence in my family background. It just naturally came around to my creating art as a means of thinking things through without bottling up. It became my way of processing difficult feelings.

Now 22, with a BFA from Daemen College under her belt, Schmidt enters the professional art world with an impressive skill set that will take her a long way. But looking at her high-concept installation Kinetic Bodies, which you may have encountered at Wrafterbuilt  on Elmwood or while grabbing a coffee at Grindhaus in Allentown, it’s quite clear that her art education is a useful afterthought. In a world where you’re an artist when you say you are, Schmidt is an undeniable force. Consequently, her art is provocative without resorting to shock value. It’s confrontational without being obnoxious. She’s not afraid of using restraint. And yet, it’s also clear that if the situation called for it, upping the ante wouldn’t be an issue.

“I learned what I needed to learn from school,” she said. “It was mainly about technique, and of course history and context are really helpful tools. But I think the best part of a formal art education is finding new ways to break away from it.”

Schmidt says she also crossed a creative threshold during her time at Daemen, which has changed the focus of her output from work that dwells on internal struggles to that which learns from battling them as a means of moving forward. She’s uncertain whether the change is a byproduct of schooling or an unrelated psychic shift, but it happened within the same timeframe.

If that’s indeed the case, Magnified Alleviation could be interpreted as an intersection between those things. Through a series of nine mid-size panels, she draws parallels between the emotional and physical spheres—mind and body—and the oft-ignored connections between them. It’s an ode to Eastern philosophies on one level (“Western culture doesn’t recognize how we’re all in different stages of a healing wound”), but doubles as a very graphic take on the concepts of injury, healing, and irreparable damage. Each piece is titled after a medical term that depicts a stage in the healing process, (Epithelializing, Necrotic, Eschar) complete with a detour through infection (Serous) and a scar (Cicatrix).

Magnified Alleviation is the culmination of a year’s worth of work, and was designed, partially, in response to a challenge from Daemen’s Fine Arts department.

“I was told by Daemen that I needed to complete a series of flat paintings, which is something I’d managed not to do during my time there,” she said. “I had to really force myself to work flat, but that led to a greater sense of satisfaction in completing the project. You might say I felt like I tried to do something they’d buy. I really poured my whole heart into it and became super infatuated with the process. In the end, the head of the department hugged me.”

And rightfully so: Maybe the most impressive aspect of Schmidt’s achievement is that Magnified Alleviation very obviously struggles to stay flat. In other words, her creative personality still beams from every inch of it despite the perceived compromise in presentation. The pieces bubble and bend, straining not to jump off the foam surfaces at their foundation. Little peaks and valleys sometimes crawl just past the designated edges, but it all fits within the conceptual framework, especially since wounds change shape as they heal—it’s not meant to be so tidy and exacting. It also serves to link the pieces in a way that suggests a process, as if they’re reaching out to be closer to one another.

The three-dimensional aspect of the Alleviation panels is something that runs through everything Schmidt does these days, since she’s taken to using a mixture of found materials and curiously repurposed “non-art” objects as a way of bending meaning and challenging convention. She keeps a hodgepodge of random items in her studio closet for future use, and the ideas about how to use them sometimes come in flashes. In other situations, objects end up claiming their own role in her work, as if telling her where and how they belong. An in-progress installation she describes as being interactive—made to fit two people at a time into the actual structure—utilizes chicken wire, mattress pads, leather sewing utensils, old sheets, and drop-cloths.

Regardless of how the ideas come together, she says the end goal of an exhibit is always in mind. She uses mediation and writing as vehicles for clarifying the metaphors in her artwork.

Schmidt seems aware that being in Buffalo affords her choices and opportunities that might be more hard-won elsewhere, but she isn’t too terribly daunted by the prospect of fiercer competition. In fact, she welcomes it as an opportunity for growth. Meanwhile, she’s been working at 464 Gallery and at Manuel Barreto Furniture where she’ll be building a new installation in the near future. On Friday, February 5, she’ll have a trio of pieces in a group show at Dreamland, entitled Bodily Echo, which is being curated by Dana Tyrrell. She’s been applying for grants, and overall, the future looks bright.

“I think it’s really encouraging to be an artist here,” she said. “The galleries are very accessible, it’s a close knit community…I feel like I fit in and it feels good to be supported. But it’s also important for artists to have more art coming, to be building more ideas, and dealing with more competition. I try not to be afraid, but instead just to learn. You don’t always create awesome things, but at least there’s a lesson in each experience. Without that, you’re going to drown.”