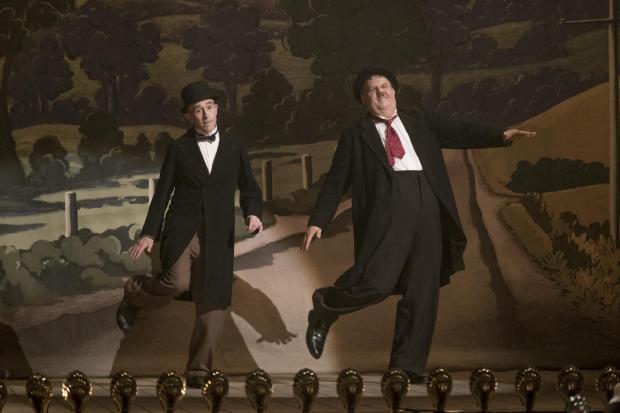 In India, they were known as “Jaadya Aani Radya” (“Stout and Worrywart”). The Danes called them “Gøg og Gokke” (“Wacky and Pompous”). They were equally beloved in Poland as “Flip and Flap” and in Germany as “Dick und Doof” (“Chubby and Dumb”). For the Italians, they were “Cric e Croc.” There’s probably an untranslatable idiom that had Sweden and Norway call them “Helan och Halvan” (“The Whole and the Half”). Most other countries called them by some variation of “The fat guy and the skinny guy.” But they were known and adored around the world as much as in English speaking countries where Laurel and Hardy were simply Stan and Ollie.

Like Charlie Chaplin’s “Little Tramp,” Laurel and Hardy created comic archetypes that are universally recognized even where their names are not. This new film was made in England, where they have retained a greater hold on public affection than they have in the United States. And despite focusing on the duo when they were at the lowest point of their career (and playing fast and loose with history), it’s a sympathetic portrait that could win them a new generation of fans.

The film opens with a wedge that appeared in their partnership at the peak of their success in the late 1930s. Laurel (Steve Coogan), was devised most of the teams material and was the de factor director of their films, wanted them to leave Hal Roach Studios, which had them under separate but equally miserly contracts. His was up, so he worked out a better deal with a major studio. But Hardy (John C. Reilly), who needed cash for alimony and gambling debts, refused to go along with him.

The bulk of the film takes place in 1953. Their career has faded, and they’re hoping for an independent European producer to back a new movie for them. To drum up publicity they agree to a theatrical tour of England. As they trot out old routines for small audiences, they reconnect with each other, airing old wounds but realizing how much they mean to each other.

The script by Jeff Pope, who also wrote Coogan’s film Philomena, gives the impression that Stan and Ollie haven’t seen much of each other in the 17 years since the contract problems. In fact they worked together consistently as a team for all but a few of those years. They in fact did several tours of England, and the events in the film mostly took place during the late 1940s. (There are lots of these kind of errors; I will stop listing them before I become tiresome on the subject. OK, more tiresome.)

But in the 21st century, who cares about facts? Pope and director Jon S. Baird are more concerned with an emotional portrait, and while they’ve probably tweaked that aspect as well, it’s undeniably effective.

Of course, a movie like this stands or falls on the strength of its impersonations, and that’s where it struck gold. With the aid of some artificial padding, Reilly is a dead ringer for Hardy (referred to in most instances, as he was in life, by the nickname “Babe.”) Coogan doesn’t much resemble Laurel, but his brilliant skills as a mimic (so well showcased in the three The Trip films) more than compensate.

And as well as bringing their individual characters to life, Coogan and Reilly lovingly recreate Laurel and Hardy’s signature routines, like the saloon dance from Way Out West and a cannily timed bit that has them walking past each other at a train station over and over without seeing each other.

Loyal fans of the duo will enjoy casual references to favorite moments, like a bit with a steamer trunk at a subway station that recalls the short film The Music Box (the one in which Stan and Ollie haul a piano up a steep flight of stairs). It’s a funny bit even if you don’t get the reference, which indicates that Stan and Ollie may have a hope of winning larger audiences than those who remember the fat guy and the skinny guy firsthand.