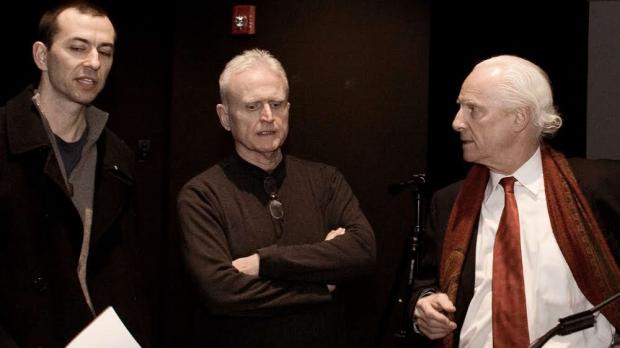 A contingent of local actors and musicians is mounting a staged reading with music of Goethe’s gargantuan ungainly masterwork Faust—both parts—this weekend at the Burchfield Penney Art Center. Nominally a dramatic piece—theater piece—but more realistically closet drama—incorporating elements of tragedy, comedy, epic and lyric poetry, grand opera, even sci-fi, in treating of matters human and divine and in particular diabolical.

God has a cameo role right at the start, but the main characters are the already greatly learned but insatiably ambitious for more and more knowledge Faust—played by David Oliver—and Mephistopheles, an authentic devil from Hell—played by Vincent O’Neill—whose quest for Faust’s immortal soul is the ultimate subject matter of the work. There are other characters in generous abundance—played by Josephine Hogan and Kurt Guba, both in multiple roles—some of them important to discernible plot. Such as Margarete, the simple village girl whose seduction by Faust is the focal dramatic action of Part One, and who dies miserably at the end of the part.

Hard to identify a focal dramatic action for Part Two. Helen of Troy shows up, more or less as replacement for Margarete. Faust seduces her—or maybe it’s the other way around—but anyway they have a child together, a kind of Icarus figure—always flying off dangerously—who comes to a similarly Icarian unfortunate end.

But many other plots and subplots, some of them hard to connect one to another or to the main plot. Like Faust and Mephistopheles’ financial rescue of the emperor and empire—not clear just what empire, maybe the Holy Roman Empire—by locating some cached old gold—not so difficult a job for Mephistopheles, with his supernormal powers—and inventing paper money. Or the sci-fi episode with a test tube baby—Homunculus—who also comes to a bad end. Plus a medley of ancient world figures, including actual and mythological figures, known and obscure. Thales, Proteus, a Sphinx, some Phorkyads. (Who? What?) Not to mention the series of improbable locations.

When Goethe’s Faust is assigned reading—as say in a school or college course in world literature—and it’s not that often read other than as assigned reading, and not even always then—but it’s assigned because it’s the Teutonic contender in the masterpieces of world literature competition, up against competitors the likes of Shakespeare and Dante and Homer—almost invariably just Part One is assigned, which seems to work well enough as a complete literary piece on its own. Seems to have a beginning and middle and end (and no Phorkyads).

Nobody wants to venture into the wild and crazy Part Two. Not teachers, not students. So it’s a brave undertaking of the impresario team behind this project—playwright Neil Wechsler, who adapted the text, the script, and composer Nathan Heidelberger, who created the musical accompaniment—to tackle both parts. But necessary to expound the real issue of the work, the contest for Faust’s soul. Which is not resolved in Part One. Which—insofar as it is given or taken as a complete work in itself—is more about the tragedy of Margarete.

Part of why Goethe’s Faust is a contender in the world literary masterpieces sweepstakes is because of how it captures—even amid the forest of its own devising of possibly extraneous scenes and characters and actions—a radically new world view in comparison with the previous world view. A paradigm shift.

The Faust character’s definitive quality is intellectual curiosity. He is the consummate Renaissance scientist figure, always striving, always questing. For knowledge. But something more. Knowledge as power. But God seems to approve. Confident that the ceaseless quest will ultimately lead to Faust’s salvation. Willing to wager with Mephistopheles—with whom this God seems on surprisingly good terms—that he, the devil, can’t get Faust to stop, to rest, be satisfied. If so, Mephistopheles gets him—gets Faust’s soul—for eternity.

Then again in Part Two, culminating in a kind of utopian scheme, new Eden scheme. Faust in a Robert Moses mold. Issues of colonialism, imperialism, gentrification. (But not to spoil the outcome.)

In a key formulation right at the beginning of his Confessions—in a prayer to the Deity, to whom the Confessions is addressed, as well as précis statement about the human condition, human predicament—great medieval philosopher and theologian St. Augustine says, “Our hearts are restless until they rest in you.”

Restlessness in the Middle Ages, a kind of alienation. In the Renaissance, an admirable and proper human attribute. The paradigm shift.

Wechsler and Heidelberger gave a talk and demonstration recently at the Jung Center about various aspects of the project and their collaboration on it, including the problem of condensing a script that would take a day and a half to present in full down to less than an hour presentation. Asked by an audience member what got him interested in this play in the first place, and caused him to take on such a formidable project, Wechsler said, “I guess, for some reason, I am attracted to impossible plays.”

Explaining further, he said although the work overall is “not dramatic, there are dramatic moments—sublime moments—about what it means to be human.” His interesting challenge was to capture some of those moments in a greatly condensed version of the work overall.

Heidelberger said part of what intrigued him about the project was that whereas there has previously been lots of music written on the Faust theme—by the likes of Berlioz, Schubert, Stravinsky, many others—he said his aim and intention in his own compositions is “to take from the tradition and make it something new. Maybe a melodic fragment or a few chords from a traditional work, transforming that material into something very different.” He talked briefly about how he did this in the present case with a musical phrase from Schubert’s Gretchen am spinnerade, a song setting of one of Margarete’s speeches.

The musical ensemble will include a flute, oboe, saxophone, two cellos, and percussion. Matthew Chamberlain to conduct. The project is under joint auspices of the Burchfield Penney, A Musical Feast, and the University of Buffalo Creative Arts Initiative. Performances will be at the Burchfield Penney on Friday and Saturday (February 3 and 4) at 8pm both evenings. For tickets call 878-6011.