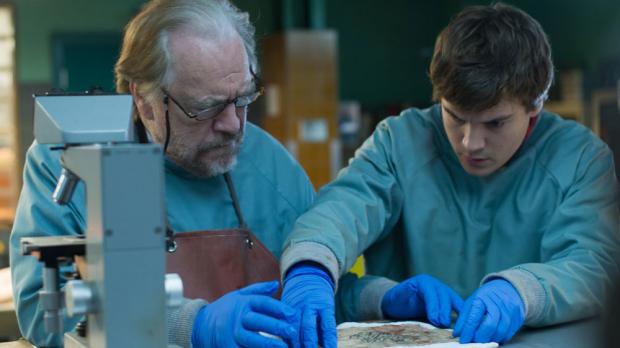 “Everybody has a secret,” says Tommy Tilden (Brian Cox) to his son Austin (Emile Hirsch). “Some are just better at hiding them than others.”

Though he says “everybody,” what he means is “every body.” Tommy is the coroner in a small city in Virginia, and his son works as his assistant. An autopsy is the method by which a coroner determines exactly how a person died, and he wants Austin always to remember not to jump to conclusions. Only by being both methodical and thorough can they hope to find the truth.

Tommy’s truism is put to the test by Jane Doe. That, of course, is the name the police assign to a female corpse that has not yet been identified. This one was found in the basement of a nice suburban home where the owners were found dead. Jane shows no outward signs of trauma or decay, so there aren’t many conclusions Austin can jump to before they get to work. And as they proceed—methodically, thoroughly—everything they find only confuses them more.

The Autopsy of Jane Doe is a horror movie, and a fairly traditional one by current standards—no found footage, no extreme gore. The details of an autopsy are admittedly not the sort of thing every viewer will want to sit through, but for what they are director André Øvredal handles them with restraint. Tommy’s spoken descriptions (As is traditional, he and Austin narrate their actions and observations to a tape recorder) are more disturbing than anything we actually see, especially given how unexpected they are from the sight of Jane’s outwardly intact body.

I break horror films into two groups: movies with a supernatural element, and movies about bad human behavior, which I find much harder to watch. If you’re like me, you may want to know that while there is some element of the latter, Autopsy of Jane Doe is primarily an example of the former. As the night goes on, father and son discover that they are not in control of everything in their basement mortuary.

Their discovery of what is happening, unfortunately, is the point at which this absorbingly creepy movie starts to lose control. Unable to grasp some parts of the plot (which I blamed on having to watch a movie shot in dark settings on a home screen—if you want to see it, get out to see it on a big screen while you have the chance), I read the viewer’s comments on IMDB afterward. There I found a lot of disagreement, the most persuasive comments indicating that director Øvredal was being perhaps more subtle than he should expect the average viewer to handle. Or maybe he was trying to encourage repeat viewings. Still, whatever its eventual frustrations, Autopsy of Jane Doe is original and deftly handled, one of the better scary movies I’ve seen in recent years. You can see it this week at the Screening Room, now in its new location at the Boulevard Mall.