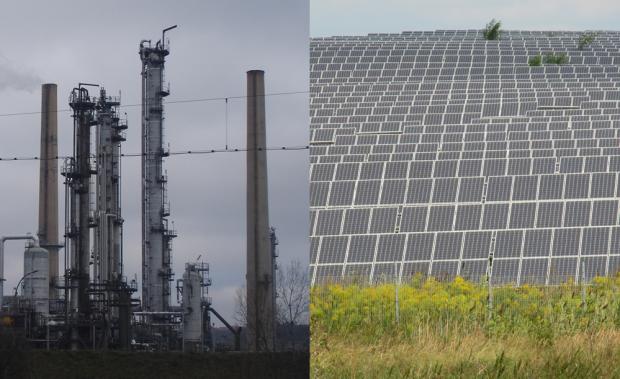 Recent years have demonstrated that extreme weather is the new normal. The Australian heat wave, Hurricane Sandy, the Buffalo Snowvember, and the blizzard currently hammering the Eastern seaboard, can all be attributed to climate change.

The burning of fossil fuels is the main cause of the climate change crisis. It is a manmade phenomenon and will, if not abated, lead to ever-greater destruction of the environment of this planet. Working and poor people will be impacted by climate change more than anyone. On this fact, there is literally no scientific debate.

The question must be asked: who are the forces denying this reality and what can be done to transform our energy production and energy needs to stop this destructive path?

At its base, the climate change issue exposes underlying economic forces. The leading deniers of climate change reality are in the fossil fuel business. For them, moving away from from fossil fuels to renewable energy sources represents a profound crisis.

This is particularly true of the Koch Brothers and their various public offspring. They buy elections and pay for spokespeople in order to continue to expand an empire built on destroying the environment. And more often than not, the same people who fund anti-environmental campaigns favor and fight for policies that harm workers and benefit the 1%.

The world is at a crossroads on this question, and the move to renewable energy is an urgent necessity. Solutions can and must be found.

For the broad masses of the world’s people these solutions must be found in such a manner as to improve economic well being; not as an excuse to shift the burden of needed changes onto their backs. Fortunately, such a path does exist and it is possible.

The key concept is that of a Just Transition from fossil fuels to renewable energy. A Just Transition does not destroy jobs, it creates hundreds of thousands of new ones: it helps communities keep services and schools, it doesn’t gut them; it expands public transportation with modern, more efficient buses and trains; it fosters public/private partnerships like Solar City (being built on the site of the old Republic Steel); and it provides opportunties for co-operative worker-owned businesses that are powered by green energy. Further, we must dedicate massive investment in our crumbling infrastructure and pay for it by ending subsidies to the oil and gas industry.

The time has come to address this problem by taking a hard look at the forces on either side of this divide. Either line up with a broad-based mass movement for a greener earth and more fair economy or deny what the world’s scientific community has declared and be part of the modern flat earth society and the Koch Brothers’ empire.

Erin Heaney is Executive Director of the Clean Air Coalition.