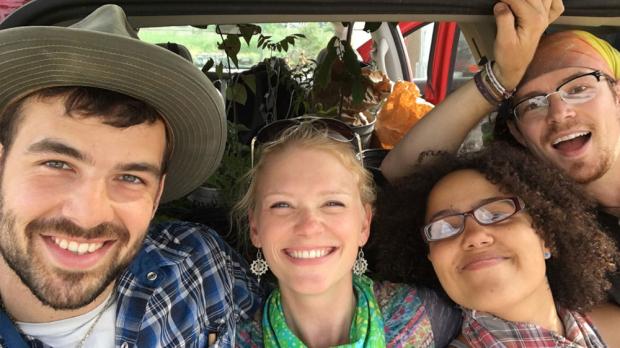 There’s a place in Seattle called the Beacon Food Forest—an edible forest ecosystem located near the city’s urban center. In Baltimore’s Clifton Park a food forest is developing where folks can find peaches, apples, and other edible or medicinal plants. Planted by volunteers, these public gardens are created using the principles of permaculture design—essentially a system of agriculture that uses space, patterns, and features of a certain ecosystem, like an urban area, to maximize its benefit to people and the local environment.

A group of young folks from Buffalo, Eric Cornell, Coley Forest, Elli Garratt, and Tim Gavigan—known collectively as Beforest—have a vision to implement some of these permaculture concepts in Buffalo, and maybe even help bring about Buffalo’s first food forest. The first step is to bring awareness to the concept and to do that they’ve set up an art exhibit at Ashker’s Juice Bar on Elmwood titled The Year 2016 According to Trees. The photo exhibit is a document of how the team harvested and forged for edible plants each season of the last year. This week we spoke with Cornell and Gavigan about their project.

What is permaculture?
Cornell: Permaculture is re-evaluating how indigenous and traditional people lived in balance with nature. So applying that into today’s context. It’s tree identification, foraging, wild foods, knowing how to collect seed and grow plants—connecting it to the natural economy, the free economy of growing your own food. Resource recognition. Bypassing money. Permaculture presents a way to empower people. To feel more in control and more like they have a functional relationship with the planet. It can be as simple as composting your vegetable scraps and growing tomatoes, or it can be being able to forage for black walnuts or knowing all of the different seasonal yields and edible plants. Knowing how to grow those plants around your home—edible landscaping.

Is there a lot of that in the city of Buffalo?
Cornell: There are a lot of people interested—it’s kind of on the fringe still but there are people interested in foraging and beneficial plants, and more than just vegetable growing. There are people who love plants and love to share. It’s more of an abundance mindset rather than lack oriented—like everybody has to hoard what they have and not share. It’s a recognizing that there is more than enough if we just have the eyes to see what it is. People could be starving and walking through the woods and they don’t realize that they’re walking by all of these things that are edible. We use the term food desert for cities, and that’s really true. Is building a Whole Foods in Amherst the solution? Or is it empowering people to see what is edible natively and then teaching them how to propagate that—like stewardship. Like a Johnny Appleseed type model.

Tell me about The Year 2016 According to Trees?
Cornell: We started a little nursery in the spring and bought a bunch of plants and grew them out. We didn’t make any money doing it. We did some landscaping jobs—probably five different edible landscapes for people. So we made enough to continue to exist basically, but it wasn’t like a moneymaker and we learned a lot. I’ve taken pictures all throughout the year and taken notes and everything to go into a high visibility, accessible place in the city and tell the story of 2016. The pictures start from March, starting with tapping maple trees on Grand Island—we tapped 45 trees, that’s where it starts in March. Over the course of March we collected 120 gallons of sap, which boiled down to three gallons of syrup. Then we had a pancake breakfast. What we’ve realized is that each season has that type of thing, that nature is super abundantly trying to give us. In the fall me and Tim, we had our eye on these black walnut trees on this road that we’d drive by a lot. So we took one day, 20 minutes, and collected hundreds of walnuts. Growing up it’s like you don’t think that anything in nature is edible, it’s like, “oh that must be poisonous because it’s not from the store” kind of thing. So that’s the big shift for me is recognizing that even if it’s 10 percent of my diet, I could forage it and there is no money transaction, and it’s probably the most nutritious food that you can get.

Gavigan: This display is not only pictures, but it’s describing what you’re actually looking at. That leaf is beautiful, but what am I looking at? And what impact does that have on my life? This is Elmwood and that’s an elm tree. Back in the day, Elmwood had a canopy of trees on each side so it was actually a corridor that was tunneled. It connected downtown all the way to the Kensington Expressway, which we now know as a road, but it used to be a parkway and a parkway wasn’t for cars, it was for walking and strolling. The education is what we’re focusing on because the experience of being re-educated into your own remembering of this knowledge gives you that self empowerment back.

So this project was meant to document what you’ve been learning, but also give you a platform to talk about it?
Cornell: Exactly. It’s to inspire people and educate. Our catchphrase for the exhibit is “art as an additional yield of regenerative ecology.” What that means is that it’s not art because I just wanted to take time to be creative and I made a beautiful thing, it’s that the work itself is artistic and it’s just a byproduct of actually planting trees, actually learning how to do a thing. The art is almost like a consequence or a side note.

Gavigan: Each picture has it’s own story but they’re all put together in a timeline which shows you what 2016 was. The additional yield that is art came from something that originally gave you food, air, and water, and then on top of that, it goes here’s this Picasso thing that can’t actually be reproduced. There are so many different things you can get from one product. The more and more entwined into the seasonal production value of everything and you get the maple yield during the late winter/early spring, then you throughout the year have tuned yourself to pick up all of these free items that are out in nature. Permaculture represents to me a way to create a new, peaceful future by correcting our food system. If we planted food bearing trees, publicly held throughout the city of Buffalo, we’re giving our future generations the ability to not have to worry about producing their own food. Instead of going somewhere and protesting, and I think that maybe that has a place, but I think that just as important, or maybe more important, is doing this work to create the foundation for sustainability and regeneration going forward.

What can folks do to promote this culture? What can people do on an individual level and what would be an ideal situation?
Cornell: Buffalo is an amazing opportunity. It’s changed in the past few years but the amount of vacant land and vacant lots—like the Massachusets Ave Project is a great example of going into a part of the city with cheap land and creating a farm. They’re focused mainly on outreach, education, and annual crop production. This could be in people’s yards, but it also could be a city-wide project to create food forests where we use these vacant lots and plant out trees. You plant out the trees, and you can also plant out the vegetables too, but you have your long term food security plan that’s growing. You’ve planted the seeds so you’ve set that clock.

Do you picture a food forest as something that would be open to the public, open to the community where pick what you want?
Cornell: Yes, it’s a network. We’re used to seeing corner marts. Imagine the model of corner marts being in every neighborhood or every few blocks, imagine that’s just a parcel of land with tree crops, fruit trees, berries, vegetables. That’s the equivalent or analog. I think the idea is that it’s free. I think that there are ways to organize, to sell surplus, so there’s a way that the food is getting to the people that need it, and it’s commonly held. So it’s not like a business is operating it, like an orchard and it’s a privately held thing. There are probably a few different ways it could be run. There are models that can be replicated. Beacon is probably the most well known in the United States. It’s a seven acre spot, and it’s in a neighborhood of Seattle that’s more economically down, so it’s great in that sense, to be providing food in the food desert. It creates a new culture around food and gives people the opportunity to become producers instead of consumers. In a generation or two, it will be hard to remember when we didn’t have commonly held food everywhere. It will be looked at as like a dark age, when food was unavailable, or it was available but produced in another state or another country, wrapped in plastic with chemicals to preserve it. It’ll seem really strange.

What do you see as the barriers to entry into this process?
Cornell: The barriers are that it’s relearning a new way of doing things. But it’s not new, it’s actually really old. Part of answering that question goes back to the root of civilization and making food something that is not commonly held. The etymology of the word “lord” for example: parcels of lands and paying your rent to a lord, it’s the “loaf ward” it’s the holder of the grain, or bread. It’s a form of control. Besides shelter and food what other expenses do we have to provide for our core essential needs? We’ve become comfortable, or used to converting our life into currency, then using that currency to pay for our goods and services. So that’s that production vs consumption model. I think the barrier to entry is that this isn’t like a happy meal or a whopper, it’s not that instant gratification. We’re seeing the health and psychological effects of that model and it’s not going to change over night, but to show people how rewarding it is to plant a tree and watch a tree grow.

Are you two working on creating a food forest or are you simply promoting this idea?
Cornell: There are other people interested in the actual formation of a network of food forests in Buffalo. There’s a group that met at Merge last week, I think they had 10 people. A very passionate, diverse crowd of people with different skillsets. Something I want to touch on about Buffalo specifically is the legacy of Olmsted and the park system. It’s interesting to note that in Olmsted’s design there are a lot of edible trees. In South Park there are so many different types of oaks, and oaks have acorns, which have been a food staple for cultures all around the world. There are hackberries, which are nuts covered in a sweet, date-like fruit. Hackberry have been found in South America, central Asia, southern Turkey, China—this is a food crop which is the oldest known human plant food. These trees are lining Mckinley Parkway in South Buffalo. This is not even something that has to be started from scratch, it’s already here.