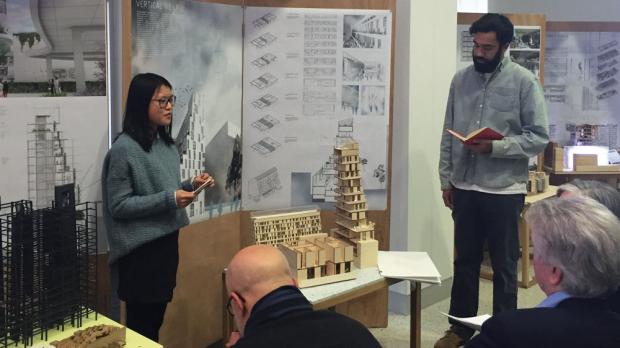 A score or so of visually and conceptually spectacular proposals by UB architecture undergraduates for new developments downtown currently on display in the lobby of the Architecture and Planning School building. (The clock tower building on the South Campus, formerly Hayes Hall, lately renamed Ciminelli Hall. Sic transit gloria mundi.)

Like one that combines residential units and a long spiral ramp bike path. Six or seven layers of double-loop bike path, and tucked among the ramp structure—so as not to impede the bike path—the residential units. A little like the New York City Guggenheim Museum but al fresco. No encompassing walls or roof.

Models and ancillary expository materials are displayed, sometimes specifying where the proposed structure would be located. The bike path complex for example on the empty couple of acres—now a blacktop parking lot—across Swan Street from the Ellicott Square Building, and Washington Street from the baseball park.

Another multi-purpose complex combines residential units and fruit and vegetable production. Looking on the outside a little like a Chinese rice paddies terraced mountain. Every residential unit has a private greenhouse, and there are numerous public green spaces throughout the complex, altogether producing substantial quantities of green goods for resident growers’ consumption, and the surplus to be sold—along with local farmers’ production no doubt—in a public market on the ground floor. As described in the expository materials, intended to satisfy two urban society crying needs: a lack of access to fresh produce, and the need of urban dwellers for connection with nature, the environment.

Another proposal is intended to mitigate the dual issues of increasing numbers of people of all ages—but especially elderly—living alone, and difficulty of finding suitable housing for large extended families. Five irregular rectangular block towers containing small efficiency units for one to two people, and large units for eight to ten people, organized and arranged to function jointly or separately, to allow independence or interaction of occupants as desired, and flexibility to accommodate changing family—or extended family—needs over time. Alternative and antidote to the becoming ubiquitous retirement communities, geriatric institutions, rest homes, under whatever euphemistic name or guise.

Some ideas admirable but a little utopian. Like one for a large, multi-level, multi-purpose refugee community complex to welcome and offer a variety of services and assistance to refugee newcomers, such as a place to stay initially, while receiving help finding work and more permanent housing. A world map with refugee data among the ancillary materials informs that in the year 2014 (apparently the most recent year for which reliable data was available) the United States took in a total of eighty thousand refugees (a disgraceful number in comparison with the refugee numbers worldwide, something like forty million by rough count), and Buffalo and region—but mostly Buffalo, mostly the West Side—took in sixteen hundred (not a disgraceful number in comparison with the United States total number, and good for us in several senses).

But salutary emphasis on social and cultural integration in general. A proposal for student housing downtown. Another for artists’ housing in a complex immediately south of the Dun Building on Pearl Street. Residential and workspace lofts, and multi-level gallery space, plus a raised walkway connecting to pocket parklands to the west and ultimately the Erie Basin Marina. Billed as a linkage between the Allentown arts community, the downtown commercial district, and the waterfront.

One proposed project looks like a huge ice house. Ice literally and as slang term for diamonds. Huge blocks of multi-faceted glass on the outside, and atrium inside ice rink for recreational skating and hockey.

No student names attached to the proposals. Something to do with a judging competition.