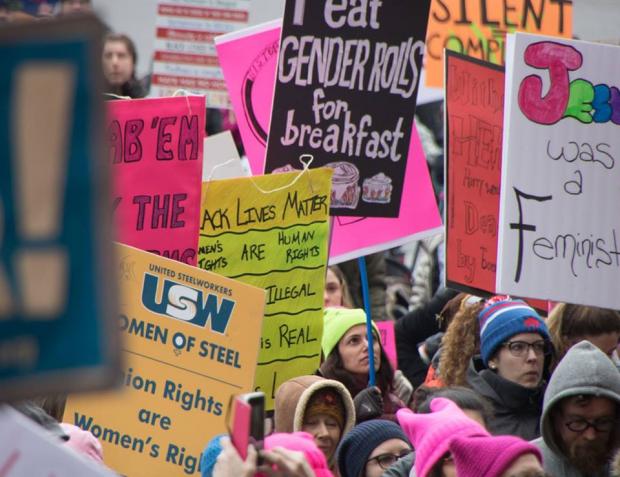 Thousands of marchers gathered in Niagara Square on Sunday, January 21. Photo by Michael I. Niman.
by
The Public Staff
/ Jan. 23, 2018 10am EST

Women and democracy. The second annual Women’s March drew thousands in Buffalo on Sunday, and hundreds of thousands elsewhere. Whatever your politics, the strength of a democratic government depends on participation, and we’re witnessing more civic engagement, people willing to leave their computers and enter the public sphere. While some of this can be chalked up to resistance against a divisive president, there are signs it goes deeper. Last Tuesday, for example, hundreds of people filled Buffalo Common Council chambers for a budget hearing, many of whom advocated for further development of participatory budgeting, a mechanism which allocates power from elected officials to citizens of a community. Citizens bent the Council’s ear on inclusionary zoning, made a case for sidewalk snow removal, a shelter for LGBTQ youth, the need for language access, streetlight repairs, more money for schools, and municipal WiFi. This is what democracy looks like.

Community Beer Works. The venerable West Side startup brewer announced it would be resurrecting Buffalo’s strongest historical beer brand, Iroquois Beer, a regional, easy-drinking, American light lager. There are layers inherent in such a project, and one of those is the racist appropriation of Native American culture. And not just because they advertise with us but because they try their damnest to put good back into the world—hosting dozens of fundraisers in their brewery for groups like Planned Parenthood, the International Institute, and Friends of the Night People—if anyone can be trusted to exercise sensitivity and make a beer we can all be proud of, we believe it’s Community Beer Works.

Erie County Department of Social Services. Only a month ago, the county’s top social worker, Al Dirschberger, resigned his post amid an investigation into possible sexual assault of a county employee. On Monday, he was indicted in Albany for rape. A few months ago, such allegations might be met with public ambivalence: “Who knows what really happened.” But now, as we’ve had a reckoning with the incredible courage it takes to make such an allegation against a powerful and very public official, the news has a different texture to it. Social workers who know how hard it is for a district attorney to even bring rape charges have to be shuddering hearing Dirschberger’s attorney’s insistence that the sex was consensual.

The Buffalo News. If further evidence were needed that the Buffalo News marches to the drums beaten by the Buffalo Niagara Partnership, consider a brief piece published online last Tuesday in response to Governor Andrew Cuomo’s budget proposal. It comprises four paragraphs by business reporter Matt Glynn, of which the first three provide factual substance that might be the basis for a useful piece—total dollars allocated by Cuomo to various economic development programs, including the amorphous Buffalo Billion project. The fourth (and longest paragraph) is a quote from BNP president and CEO Dottie Gallagher-Cohen (formerly on the management team at the News) that is in no way responsive to the facts presented in the first three paragraphs. Gallagher-Cohen plays the Partnership’s favorite saw—“New York state continues to be one of the highest taxed and overly regulated places to own and operate a business”—about New York State’s putatively punitive high tax, a non sequitur. But Glynn quotes her anyway, because, perhaps, that was the point of the piece: to give the Partnership a venue in which to play that old saw.