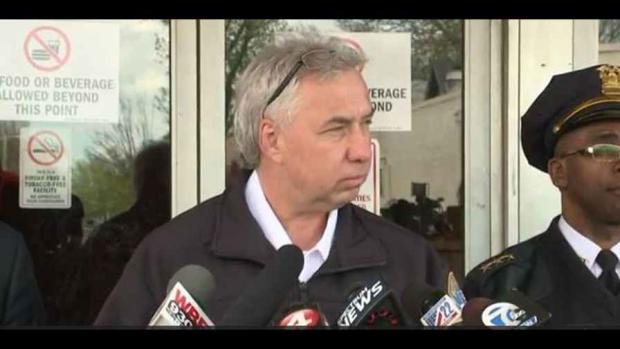 Last Monday, Daniel Derenda was Buffalo police commissioner. As of last Wednesday, out of the blue, he’s retired. The lack of public notice has some people, including me, wondering if there’s more than what meets the eye. I mean, who announces their retirement the day they walk out the door, especially the guy in charge?

This much is certain: He leaves behind a police department that is, well, kind of a mess. Some he inherited, others cropped up on his watch.

Most telling, perhaps, are the cases of Wardel Davis, Jose Hernandez-Rossy, and Craig Lehner.

Davis and Hernandez-Rossy died last year during encounters with police officers. An investigation by the state Attorney General’s office concluded that asthma, not officers, caused Davis’s death, although there are questions as to whether police were on sound legal ground stopping Davis in the first place. And, oh, by the way, the two officers involved refused to cooperate with investigators.

Hernandez-Rossy was fatally shot in May by an officer, and his family has filed a wrongful death lawsuit against the city. Police have offered varying stories as to the circumstances of the shooting. No word yet from the AG’s office on its investigation into the incident.

Craig Lehner, a trainee in the department’s underwater recovery unit, drowned in October while on a training dive. His death is under review amid questions as to the adequacy of his training and supervision of his deadly dive.

Investigative Post’s Daniela Porat has reported the last year-and-a-half about serious problems within the department.

Unlike most other big-city police departments, Buffalo has been slow to train officers in de-escalation techniques aimed at avoiding violent confrontations between cops and civilians. Kevin Kennedy, then president of the Police Benevolent Association, told Porat in the fall of 2016 that officers were “starving for the training.”

The department’s Internal Affairs unit routinely absolves police accused by civilians of brutality. Internal Affairs fielded 62 complaints of excessive use of force during a two-and-a-half-year period studied by Porat; the officers were cleared in all but four cases. So much for accountability.

Then there is the conduct of two units established on Derenda’s watch to deal with gangs and street crime. As Porat reported in September, defense attorneys characterized Strike Force and Housing Unit officers as “vigilantes” with a “cowboy mentality.” Porat documented instances where judges tossed out evidence because they concluded it was seized during unconstitutional searches. She found other cases where judges rejected police testimony because of conflicting video evidence or its sheer implausibility.

One witness, whose house was subject to a search in 2015 that a judge subsequently ruled was not permissible, testified that a Strike Force officer brushed off protests with a declaration: “We work for the mayor. We’re Strike Force. We can do whatever the fuck we want to do.”

Finally, the AG’s office is investigating the department’s use of traffic checkpoints as a crime control measure. A two-year study by Cornell and UB Law Schools has alleged that police have engaged in unconstitutional stops in predominantly minority neighborhoods.

Add it all up and you’ve got a poor relationship between the department and the city’s communities of color. Consider the results of a survey commissioned by Open Buffalo in 2016 that found only 44 percent of black respondents said they would trust the police in an emergency.

There are no doubt a good number of good cops on the force, but it’s reasonable to conclude the department as a whole lacks sufficient training, discipline, sensitivity and professionalism.

The department’s lack of accreditation is a case in point.

More than 150 departments across the state have it and Buffalo’s City Charter requires it. The idea is to periodically bring in outside experts to size up the department’s policies, practices and operations. Buffalo is belatedly seeking accreditation, after being shamed into it by our reporting a year ago.

I suppose this wouldn’t matter so much if Buffalo was a safe city where the bad guys get caught. But that’s not the case.

Yes, crime is down in Buffalo, but what’s usually left unsaid is that it’s down across the nation. The decline here notwithstanding, Buffalo continues to have one of the highest violent crime rates in the nation among cities its size.

And the department’s clearance rate—that is, the percentage of the time a suspect is arrested—is middling. That means, more often than not, the bad guys get away with it. That’s especially true when it comes to homicides.

The department has cleared only eight of the 38 murders committed last year, according to the city’s website, which amounts to one of the absolute worst clearance rates in the nation. Police here are quick to blame a lack of community cooperation, fueled in part by gang intimidation, but it’s safe to say homicide squads in other cities have found effective ways of dealing with those same dynamics.

Mayor Byron Brown didn’t exactly knock himself out in the job search that lead to Derenda’s appointment in 2010 and his intention to appoint a successor in short order doesn’t bode well.

The Common Council, which must confirm the mayor’s nominee, could press for the appointment of a top-flight candidate with reform credentials. But don’t count on it.

Its Police Oversight Committee has taken a “hear no evil, see no evil” approach to monitoring the department and the Council as a whole under its president, Darius Pridgen, has been little more than a rubber stamp for Brown on issues big and small.

So, Derenda is gone, but the problems of his department remain. It’s past time for the mayor and Council to address them.

Jim Heaney is editor of Investigative Post, a nonprofit investigative journalism center focused on issues of importance to Buffalo and Western New York.