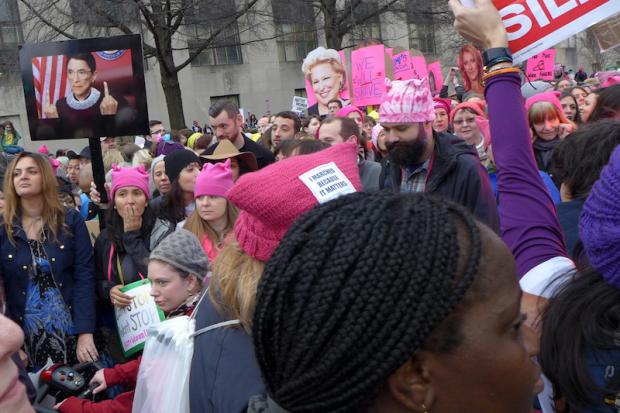 It was, amongst other statements on a growing list, Trump’s documented pussy-grabbing boast and his “such a nasty woman” comment-turned-meme about Hillary Clinton that began propelling citizens from revulsion to activism in 2016. The un-presidential—and unprecedented—Trump tenor along the campaign trail was alarming.

The day after the Trump victory, one woman, Teresa Shook, who lives in Hawaii, pondered: “What if women marched on Washington around Inauguration Day en masse?” She created a public Facebook event page that, as they say, blew up. And the rest is history—and a movement.

Women’s March on Washington happened on January 21, 2017, the day after Inauguration Day and with the Capitol Building off in the distance (inauguration bunting still hanging) behind the main stage. More than 600 sister marches were held the same day across the US as well as Canada, South America, Africa, Australia, the Middle East and Europe. More than an anti-Trump rally, the repeated motivation for marchers was to stand and protest what many fear are eroding civil liberties, and to express concerns about gender equality and for the future.

To familiarize yourself with WMW and other, related organizations, go to the WMW homepage or download the app. The app features “Topic Channels” of various themed chats, “Unity Principles” explaining the inclusive tenet of the marches, and an ongoing stream of photos averaging two per minute days after the march.

The majority of marchers wore signifying, iconic pussy hats seen in all the photos, knit caps with pointy ears, riffing on the aforementioned, grabbing-related boast. Several patterns were available online to make the hats and they showed up at all the marches in various shades of pink: some got very creative with the ears and whiskers. One DC marcher (a guy) had a punk flourish on his ears, diamond-shaped metal studs. Some wore their embroidered “Nasty Woman” hats.

This reporter made the decision to attend WMW in December as it felt imperative to be a part of history and join with my fellow activists. Would this march draw as many as the Million Man March in DC in 1995, which had disputed crowd counts. WMW was expected to draw 200,000. There were, as to be expected, divergent reports that ranged from 400,000 to 750,000. The WMW site states “Over 1 Million in D.C. came to march, speak and make our voices heard.”

A rally, according to the march website, was scheduled for three hours (from 10am to 1pm) with a march to follow: Due to the number of marchers surrounding the area around Independence Avenue and 3rd Street, the marching portion was cancelled. Speakers stretched hours beyond 1pm. Some marchers bemoaned a three-hour rally and some chanted “Let us walk!” After 1pm I did shimmy through the crowd over to nearby C Street where I marched along with a spirited parade. Some marchers later trekked to the White House, leaving protest signs in the fence at its perimeter.

Earlier plans to join a group of Buffalo friends (self-avowed nasty women who’d held a planning meeting the week prior) renting a cabin an hour outside the city were scuttled due to work. Instead I booked plane tickets, direct flights in and out of Ronald Reagan Washington National Airport. On the pre-dawn flight most of the passengers were marchers, some already in their pussy hats. The flight attendants (Terry Honeycutt and Brandi Smith) wished they could join us, and wanted to take photos with us.

We formed an informal posse of six: a woman who drove to Buffalo from Toronto (Robin Comery, “a stay-at-home mom” ex-pat and member of Democrats Abroad), two ladies from Rochester (Dr. Glynis Scott and Karen Crotinger, director of the Medical Staff Office at the University of Rochester Medical Center, “new best friends”), and two others (Peggy Leous and her buddy, Charles) from Buffalo. At some point during the march we got separated but were all (except Robin) reunited on the same return flight.

Glynis’s reason to march was “the anti-women, anti-disabilities, anti-guy message” she’d heard from the president. “I also want to protest for access to appropriate healthcare and reproductive freedom, I have a daughter in her 20s. Less privileged people will be affected by these changes; it feels like a direct attack on women.” Robin stowed her sign in overhead, worried that her sign’s cat’s protruding ears would get damaged: Her message was “Keep Your Hands and Your Laws Off Our…

Plans to meet up with various Buffalo friends were impossible because of the massive crowd, and when, at about 9:30am, all cell phones stopped working. But, as is a Buffalo truth, people from Buffalo popped up everywhere: at the airport (Carly), near the C Street parade (Brian Klemp and Edric Mesmer), and during the rally (Rebecca Bernstein). Rebecca appeared in my gaze but she drifted away in to the crowd before I realized it was indeed her. Throughout the rally there was an intense feeling of camaraderie and calm.

As my friend, artist Jessica Hutchins (there from the Northwest with her young daughter), says, “There was so much grace, beauty, wit, and intelligence at that march yesterday.” It brought to mind the Guerilla Girls’s theoretical estrogen bomb, which, when deployed, causes everyone to hug as all ill will vanishes. Every bit of the march (on and off stage) was diverse, a major tenet of the WMW m.o.

One of the street performances seen at WMW (along Independence Avenue) was LA artist Connie Lim (a.k.a. Milck) and a cappella lady singers from two choirs in the DC area, Capitol Blend and George Washington Sirens. They were in a circle and doing a flash mob performance of Lim’s composition “Quiet,” part of her “I Can’t Keep Quiet” intiative.

Following are highlights from the rally. The program began promptly after several of the first chants of the day: “Immigrants welcome here!” and  ”Yes we can!” Actress America Ferrara, “A first-generation American,” said “Our rights have all been under attack and a platform of hate and division assumed power yesterday. But the president is not America. His cabinet is not America. Congress is not America. We are America and we are here to stay.”

Gloria Steinem, journalist, co-founder of Women’s Media Center, and founder of Ms. Magazine, acknowledged the women’s marches all over the world and said, “Trump and his handlers have found a fox for every chicken coop in Washington, and a Twitter finger must not become a trigger finger.

“We are here and around the world for a deep democracy that says we will not be quiet, we will not be controlled, we will work for a world in which all countries are connected. God may be in the details, but the goddess is in connections. We are at one with each other, we are looking at each other, not up. No more asking daddy.”

Muriel Bowser, Washington, DC’s seventh mayor (elected in 2015) and in her pink hat, said, “I wanted to be here to let you know that Washington, DC has a chick mayor.”

She ended her speech by leading the crowd in the chant “Leave us alone.”

Like every WMW speaker, filmmaker Michael Moore was awestruck by the number of marchers before him. “Okay, we got through day one. We’re on day two of the Trump tragedy.” He gave “a to-do list of what we can all do. I’ll post this on my Facebook and Twitter. Make this part of your day: Call Congress every single day,” giving the number several times: “202-225-3121.” His second to-do item was to “join, join, join. Join Planned Parenthood, join the ACLU, join NARAL!”

One of the most electrifying moments was Ashley Judd’s delivery of the slam-force poem “Nasty Woman,” written by teenager Nina Donovan of Tennessee. Judd worked the stage reciting the epic which begins: “I’m a nasty woman, not as nasty as a man who looks like he bathes in Cheeto dust, a man whose words are a dis to America, Electoral College-sanctioned hate speech.”

It was later, during activist and author (The Green Collar Economy) Van Jones’s time on stage that two EMTs pushed their way toward the stage saying, “It’s a medical emergency, someone’s having a baby.” This writer was also bumped into by an entourage, pushing activist and retired politician Jesse Jackson through the crowd and to the stage.

Planned Parenthood Federation of America president Cecile Richards greeted marchers with “Hello, Washington, you are a beautiful site.” “My pledge today is that our doors stay open.” She called for clean air and water for all Americans “including in Flint, Michigan,” and reproductive rights (“reproductive rights are human rights”) including “access to safe and legal abortion.” She called for the right of immigrant families to live without fear. “We will not be ignored.” Actress Scarlett Johansson praised Planned Parenthood and how they touched her life and those of every one of her friends. She addressed Trump: “I want to be able to support you, but first, I ask that you support me.”

Six-year old Sophie Cruz, “immigration activist,” delivered her speech in English and then in Spanish. “We are here together making a chain of love to protect our families. Let us fight with love, faith and courage so that our families will not be destroyed. I also want to tell the children not to be afraid because we are not alone. There are still many people that have their hearts full of love.” Just as the crowd chanted “Gloria!” after Steinem’s speech, they chanted “Sophie!” as Cruz left the stage with her family.

Back at Reagan airport, after the short ride on the yellow line with another car packed with marchers, I spoke with several women who had come in from different cities in New England be at WMW. The echoes of the words and the chants remain, and on Sunday I met with a group of friends for an informal debriefing session over brunch. One of us went to the march in Seneca Falls, and the others march in Buffalo. We vowed to continue the energy of moving forward and discussed groups to join. I have been surprised at the number of people in my community who have thanked me for marching as a representative of them in Washington.

In the words of WMW: “It doesn’t end here—now is not the time to hang up our marching shoes—it’s time to get our friends, family and community together and make history. That’s why we’re launching a new campaign: 10 Actions for the first 100 Days. Every 10 days we will take action on an issue that we all care about.”

I plan to march again.