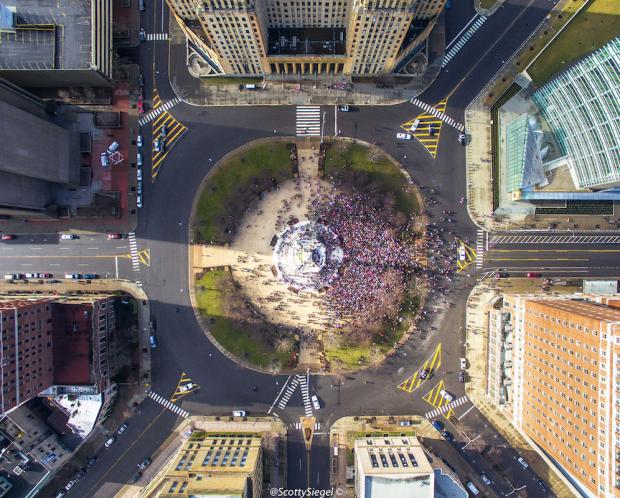 Most Americans, except for the 200 or so black-clad anarchists in Washington, DC who represent nobody, want to believe that their most important institutions are still working. But a great many very moderate, mainstream, sober people are pretty convinced that there is a riot of rot about to break out that will wreck them utterly.

Trump announced that he’s going to try to unravel 70 years of internationalism in favor of autarchy, the economic-policy cornerstone of mid-20th century European thug regimes you’re tired of reading about. (You can go online and read German finance minister Hjalmar Schacht’s 1934 program for autarchy or go-it-alone economics in the estimable American journal Foreign Affairs.)
Of course it won’t happen. But while the wonks debate and the diplomats fence over GATT, the WTO, and the reality that NAFTA and other treaties just can’t be unilaterally altered, the wired guys, the sharpies who hang around the president, will devour public lands, steer contracts, rewrite rules, and do as many inside trades as they can. As Congressman Chris Collins’s stock transactions show, it’s already happening.

And when the factories don’t reopen and the coal jobs and the construction jobs don’t multiply—because factories need robots and not people now, and coal isn’t cost-competitive with solar, wind, or gas, and privatizing a sewer system or a roadway isn’t the same as borrowing a trillion dollars to build new ones—and when health insurance falls apart after the House and the Senate kill the Affordable Care Act, something will become obvious, as it already is in Buffalo: The wired guys will still be feeding while the rest go empty-handed.

The Democrats will still be lost in the fight that Senator Bernie Sanders thumbnailed a week after the election—the fight between Democrats who want to focus on household incomes and economic democracy, as Sanders did, versus Democrats like Senator Chuck Schumer, who see an enduring coalition resting on identity politics, meritocracy, and progressivity so mild that it won’t scare Wall Street entirely away. The Schumer formula was Clinton’s, which lost wherever status-anxiety rules, the geography currently known as the heartland.

On inauguration day, before the huge women’s march, the major media transmitted a lot of expressions of heartland hope. But when the buffalo don’t come back, when the jobs, the rescues, the hoped-for deliverance goes missing, heartland could get pretty ugly, especially after the inevitable recession starts in 2017 or 2018. By then it will also sink in that Trump’s insider guys look exactly like all the Washington insiders that were all allegedly Clinton’s clique—except Trump voters in Michigan, Wisconsin, Ohio, Pennsylvania, and here in Paladino Country didn’t believe her, but did believe Trump.

And then? To whom will the angry turn?