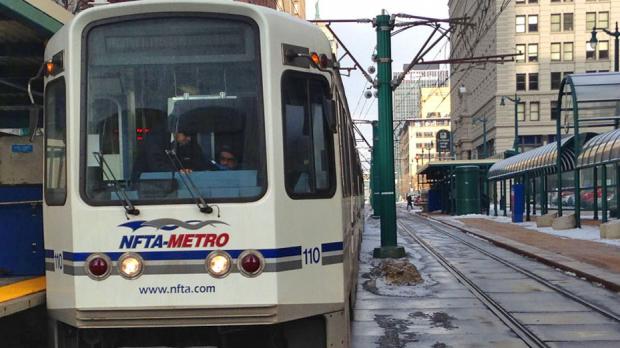 For the first time since 1985, vehicular traffic will return to the 600 block of Main Street in downtown Buffalo. NFTA Commissioner Bonita Durand made the proclamation at the board meeting on Thursday. At 1pm on Friday a brief ceremony will open the gates to cars once again concluding a years-long process to re-open the Theater District to the very thing short-sighted urban planners scrambled to prevent in the early 80s.

NFTA Director Kimberly Minkel presented the conditions of an agreement reached with the City of Buffalo that all commissioners ratified, (though Commissioner Adam Perry abstained):

Just last week, The Public featured a historical photograph of the last time cars shared the streets with light rail in Buffalo. That was 1950.

The commissioners also passed a new CBA for its police force, raising their pay 10.25 percent through 2019 in exchange for a 10 percent contribution to their health insurance premium for all 71 current officers. Minkel lauded their “excellent work” before the agreement was passed unanimously. The NFTA police force had been operating without a contract since 2011.