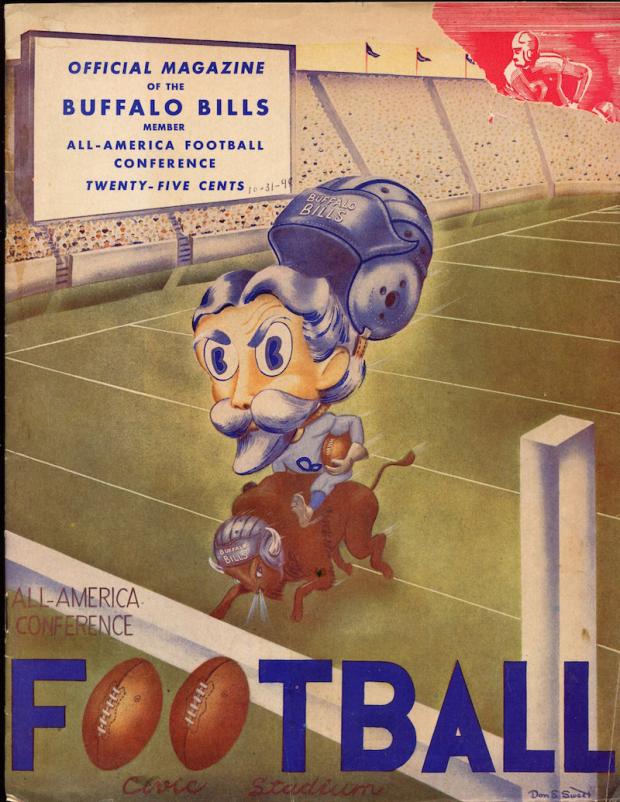 (Note: A little something from the We Want Marangi archives while getting ready to watch New England and Minnesota pummel Jacksonville and Philadelphia, respectively. Most of what follows was originally published at wewantmarangi.blogspot.com.)

When a youthful insurance tycoon named Ralph Wilson Jr. bought into the fledgling American Football League in 1959, he held a contest to give the franchise a name.

He probably didn’t need to bother. The winning entry was the same as in a similar contest held 12 years earlier for another team in another league.

The Buffalo Bills were a popular, if not financially or aesthetically successful, entry in the All-America Football Conference, a post-World War II challenger to the National Football League, who met their end 68 years ago Saturday.

Buffalo’s entry in the AAFC was almost inevitably known as the Bisons at first, just like the city’s minor-league baseball and hockey franchises.

Perhaps looking for a little diversity, or a fresh start after the Bisons went 3-10-1 in 1946, owner Jim Breuil staged a contest to come up with a new name. The winning entry was “Bills,” referring back to buffalo-killer and Western showman Buffalo “Bill” Cody, whose touring act in the late 19th and early 20th century made him one of the country’s first superstars. The name also tied in nicely with Breuil’s day job as owner of Frontier Oil. It also led to the sweet illustration above, perhaps the finest logo in Buffalo’s sporting history.

The Bills improved to 8-4-2 in their second season, finishing second in the AAFC’s East Division. Meanwhile, in the West Division, the Cleveland Browns were busily knocking the crap out of the rest of the league, as they would throughout its brief existence.

The supremacy of the Browns, who won the championship every year, helped douse enthusiasm in every member city except Cleveland, San Francisco, and Buffalo.

By 1948, though, even Browns fans seemingly tired of seeing their team destroy everybody. The Bills finished 7-7, but reached the championship game by beating the Baltimore Colts 28-17 in an East Division playoff.

The title game drew only 22,981 fans to Municipal Stadium, which regularly held 50,000 or more for Browns games.

Those who stayed home didn’t miss much. Marion Motley, pictured above scoring one of his three touchdowns, ran for 133 yards on just 14 carries. Buffalo’s offense, led by quarterback George Ratterman and backs Rex Bumgardner, Chet Mutryn and Lou Tomasetti, managed only 167 yards of offense, while coughing up eight turnovers.

A Cleveland linebacker named Lou Saban returned one of the eight giveaways, a fourth-quarter interception by backup quarterback Jim Still, 39 yards for the final Browns touchdown in a 49-7 romp.

In 1949, as officials from the AAFC and NFL discussed merger terms, the Bills went 5-5-2 and, of course, lost to Cleveland in a semifinal playoff game on December 4.

Bills fans got much worse news five days later, when the specifics of the merger were announced. Only three teams—the Browns, Colts, and San Francisco 49ers—would be absorbed into the NFL. Players from the other franchises would be scattered in a dispersal draft.

It didn’t help that Breuil, claiming losses of more than $700,000 over the Bills’ lifespan, swapped Bumgardner, guard Abe Gibron, and defensive tackle John Kissell to Cleveland as part of a deal that gave him a one-quarter share in the Browns, as Joe Marren wrote in The Coffin Corner, a publication of the Pro Football Researcher’s Association.

Despite Breuil’s sell-out, as well as Ratterman signing with the established league’s New York Yanks  (originality in nicknames was clearly not rampant in those days), Buffalo fans and businesses didn’t give up, putting together a “Keep the Bills in Buffalo” campaign described by Marren:

Despite it all, Buffalo rallied and people were slightly optimistic when a delegation went to the annual NFL meeting in January 1950 in Philadelphia with more than 15,000 season ticket pledges (more than twice the number of season tickets sold in ‘49) and $175,000  from selling $5 shares in The Buffalo Bills Football Club, Inc. But the NFL owners still turned Buffalo down because Commissioner Bert Bell did not produce a schedule that included Buffalo.

Other accounts suggest Bell did prepare a 14-team schedule, but did not present it to the other 13 NFL owners. Whatever the case, the league vote on January 20, 1950, was 9-4 in favor of admitting Buffalo. Since a unanimous vote was required, Buffalo was out.

The NFL toyed with Buffalo a little as the 1950s wore on, siting exhibition and regular-season games featuring the Chicago Cardinals at Civic Stadium in 1958.

Nothing came of that flirtation, but a year later, along came Wilson. A year after that, for better or worse, the modern Bills were born.