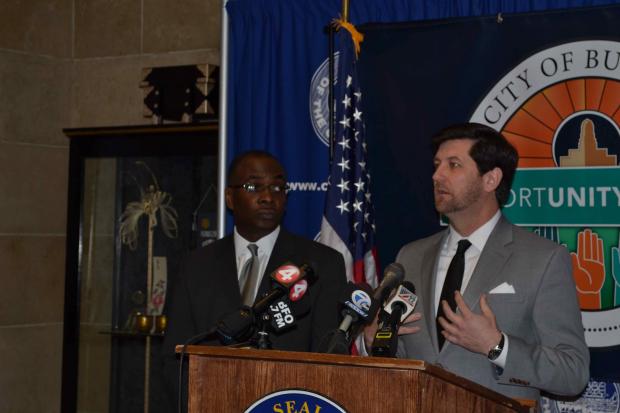 Erie County Executive Mark Poloncarz, standing next to Buffalo Mayor Byron Brown in his City Hall office, again made a pledge Thursday to promote diversity and inclusiveness in institutions throughout the region.

Poloncarz, along with Brown, again signed the city’s Opportunity Pledge, a commitment to promote plurality, particularly within businesses and civic organizations created in collaboration with Open Buffalo, a civic initiative that partners with advocacy groups throughout the region.

The county executive first signed the pledge months ago, but said he thought it important to reiterate his commitment, also bringing along with him the signatures of department heads from throughout his administration.

“We can send a message to people in our community that it is much better, much better to be building bridges between individuals of different backgrounds than, truthfully, to be building walls,” Poloncarz said.

The press conference comes as pressure is mounting on public officials to tackle long standing issues of racial disparity in unemployment rates and the quality of jobs between whites and minorities, which are particularly pronounced in Western New York.

As politicians—Poloncarz and Brown among them—have continuously championed falling unemployment and the strongest job numbers in more than a decade that have been buttressed by much public spending, advocacy groups have been pushing to make sure that something is being done to prepare residents most in need of jobs and connect them with positions in the emerging markets.

Earlier this week, a coalition of clergy, advocates, and labor organizations announced the beginning of a push to do just that, centered around a report written by the Partnership for the Public Good that details data on the disparities, highlights root causes, and offers a list of policy changes to address the issue.

Poloncarz, who early last year rolled out a health and human services plan to address issues of poverty, said the event with the mayor had been planned for months and was not in reaction to the report, but acknowledged that it is important, especially for a city mired in poverty, to make those connections and consider policies that work to alleviate some of the inequities that exist.

“It’s important that we take as many steps as we can within the budgetary constraints that we face, to try to make people’s lives better,” Poloncarz said. “It’s not easy. It’s not going to happen overnight. But, if we sat back and did nothing it’d be shame on us because we do have a role and now is the time to do it.”