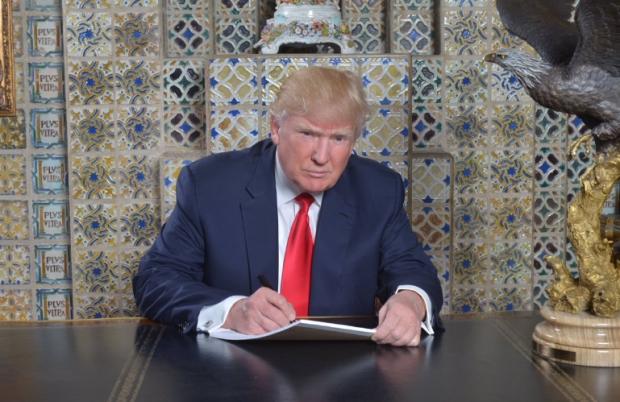 President-Elect Trump feigns writing his Inauguration Speech at a receptionist's desk at his Mar-a-Lago Club in West Palm Beach, Florida (via Twitter)
by
Alan Bedenko
/ Jan. 20, 2017 5am EST

Former Texas Governor Rick Perry is nominated to be the next Secretary of Energy.

Until a few weeks ago, Perry had literally no idea what the Secretary of Energy does, and it wasn’t too long ago he had called for its abolition. ¯\_(ツ)_/¯

Whether Rick Perry does his best Mr. Magoo, stumbling obliviously into running the Energy Department is one thing, kids’ education is far more important, and under direct assault.

Betsy DeVos belongs to one of the wealthiest families in Michigan — they own the Amway pyramid selling multi-level marketing cult scheme. She and her husband simply do not believe in secular or public education. Mrs. DeVos is Donald Trump’s nominee to head up the Education Department — a cabinet-level position that Republicans, including Trump, have frequently expressed a desire to abolish altogether, ostensibly to ensure that the quality of public education can vary wildly from state to state. She had once led a ballot initiative to permit public funding of parochial schools, which is violative of the Constitution’s Establishment Clause. She was instrumental in creating Michigan’s series of for-profit, unregulated charter schools. They have spent their billions funding so-called “Christian conservative” candidates and causes, most notably spending big money to combat same-sex marriage initiatives in Michigan and California. But for DeVos’ current nomination, this is key:

Deep into his first term, [then-Michigan Governor John] Engler wanted to show progress in his signature proposal to reduce the state’s onerous property taxes by 20 percent. Property taxes being the funding source for Michigan’s public school system, Democrats ruled out any plan that did not include a replacement for the lost revenue, and since any new revenue would require legislators to vote for new taxes or fees, that option had little appeal heading into the 1994 campaign. On July 19, 1993, Democratic state Senator Debbie Stabenow proposed an amendment that was interpreted as an attempt to point out the absurdity of Engler’s plan: Why not cut them by 100 percent without having any replacement revenue source?

Democrats were dumbstruck by what happened next: Engler whipped the state Legislature into action, and in the course of a 24-hour period, the Senate and House eradicated property taxes—in the process completely defunding Michigan’s $6.5 billion public-education system. In the ensuing crisis, Engler legalized charter schools.

That wasn’t all. In 1998, DeVos pushed a proposition to legalize statewide school vouchers, which failed overwhelmingly.

When you really looked at it, the parents weren’t the ones with the choices; the parochial schools were the ones with the choices. If all you do is transfer the money, you don’t transfer any of the other requirements that are put on public schools. Public schools are required to take everyone who comes through the door. But private schools, parochial schools, get to pick and choose. … It’s not really the parents who have the choice, it’s the schools. And people ultimately understood that.

The DeVos family has been expert in setting up PACs throughout Michigan — and the country — to push their religious and political agendae.

Today, 16 years after the DeVoses’ failed constitutional amendment, this constant push has totally remade Michigan education. The cap on the number of charter schools eliminated and attempts to provide public oversight have been defeated, making Michigan’s charters among the most-plentiful and least-regulated in the nation. About 80 percent of Michigan’s 300 publicly funded charters are operated by for-profit companies, more than any other state. This means that taxpayer dollars that would otherwise go to traditional public schools are instead used to buy supplies such as textbooks and desks that become private property. It is, essentially, a giant experiment in what happens when you shift resources away from public schools…

…While a charter school cannot be religiously affiliated, many walk a fine line, appointing, for instance, a preacher as head of the school board or renting school space from a church. “They have a couple ways of getting around it,” says Gary Miron, a professor of education at Western Michigan University who specializes in charter school evaluation and research. “I’ve been in charter schools where I’ve seen religious prayers to Jesus Christ—they mention Christ by name—and prayer circles with students, teachers and parents.”

What’s the result? Not great.

Most Michigan charters perform below the state’s averages on tests, even while their enrollment has grown to include more than 110,000 students, nearly half of whom live in the Detroit area. A 2013 Stanford study that compared Detroit’s charters with its traditional public schools found that the charter students gained the equivalent of more than three months’ learning per year more than their counterparts at traditional public schools. But that doesn’t mean they’re performing at a high level, simply that by some measures, certain charters marginally outperform the historically challenged Detroit public schools.

This is the way it’s done: this is the Republicans’ best bet:

1. Defund or otherwise siphon money out of a public program;

2. Allow the public program to fail and declare it as such — manufacture an artificial crisis;

3. Push for your so-called “free market alternative”, with bonus points awarded for appeals to God and capitalism. Maybe throw in some cracks against “socialism”, while you’re at it. You can make even your kid’s kindergarten teacher seem evil if you throw “socialist” at her.

Now, you’re free to “solve” the crisis you’ve created by inaugurating a privatization of a public right and need. You and all your buddies get to profit off of something that no American family can go without. It is literally an enrichment bonanza — a transparent but politically safe scheme to do palpable harm to the poor and middle class in order to enrich the already wealthy, or in Trump’s case the politically obedient. This is shaping up to be the biggest redistribution of wealth in American history, only backwards as the working and middle classes subsidize massive tax cuts for the rich. There is a class war underway, but it’s being waged against you — not against the millionaires.

It’s not for nothing that local Representative Chris Collins (R-Spaulding Lake), now under fire for alleged insider trading, boasted about all the “millionaires” his stock tips made in Buffalo.

Betsy DeVos’ Senate hearing took place this week, and her performance was emetic. DeVos has wide and deep experience spending her fortune on political causes, but she is bereft of any experience — direct or otherwise — with teaching, much less administering a school or district. Sure, DeVos thinks that schools shouldn’t be “gun free zones”, and fell back repeatedly on that right-wing trope; she would leave things up “to the states”. To Connecticut Senator Chris Murphy, DeVos claimed that, for instance, a school in Wyoming might need a gun to keep “grizzlies” at bay, evidencing that she has no respect for what’s being discussed — the Sandy Hook massacre of first graders. The fact that she lacks even a scintilla of qualification for the job she seeks soon became evident.

Massachusetts Senator Elizabeth Warren took DeVos to task for her utter lack of professional or personal experience with public education or higher education debt, Pell Grants, and the like.

Minnesota Senator Al Franken revealed that DeVos lacks even a passing knowledge of one of the great debates underway in contemporary American education — the challenge of growth vs. proficiency. It’s an obscure debate if you’re not in the business, but Franken here highlights his preference for growth, which measures how much students improve, versus proficiency, which merely records whether and how many students meet a testing threshold. It was clear that, for DeVos, Franken might as well have been speaking Mongolian.

Virginia Senator Tim Kaine challenged DeVos on whether all schools who accept federal funding should adhere to federal statutes and regulations concerning disabilities. DeVos didn’t just punt with a “leave it to the states” answer, but revealed a fundamental ignorance about the workings of our federal system itself .

These weren’t gotcha questions. They instead revealed a person who is woefully unqualified for the post for which she has been nominated. Not only that, it is quite evident that the only reason why she was nominated in the first place was to advance the goal of school privatization and parochialization, and because she and her family are big political donors. This might be well and good for an appointment as Ambassador to some friendly principality, but isn’t good enough to shepherd the education of millions of American children.

Hearings are now underway for Trump’s nominee for Secretary of Health and Human Services, Representative Tom Price. Like Collins, Price is also under fire for having made apparently fortuitous equities transactions that comported with Congressional action. Price and the Trump transition had claimed that this was impossible, because a broker handled all of Price’s trades without the congressman’s direct input.

Except when it came to Price’s investment in Innate Immunotherapeutics, the Australian drug manufacturer on whose board Chris Collins sits, in which Collins owns a majority share of stock, and in which Collins’ children and chief of staff are also heavily invested.

We are entering a dangerous period where government is used to enrich the wealthy and well-connected at the expense of the average working and middle-class American. We are entering a world where it will be easy for the federal government to de-fund and privatize the very foundation of our democracy. This isn’t making America great or putting America first — this is a recipe for devolution into a kleptocratic oligarchical right-wing despotism. The dilettantes are in the castle. The only thing at stake is everything you hold dear.