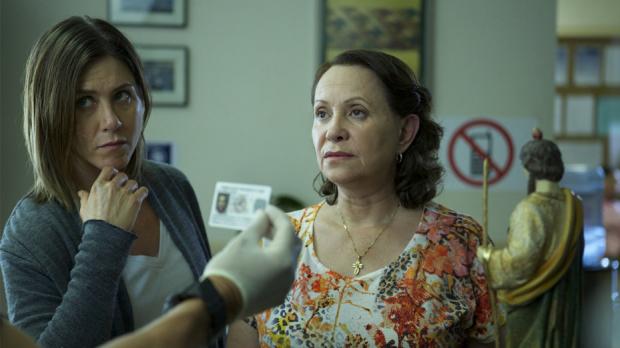 Two indie movies, two female characters struggling with life after a devastating automobile accident, two actresses whose fans are crying “Snubbed!” because they didn’t get Oscar nominations—is it any wonder that these movies start to run together in my memory?

The Babadook and Cake have less in common than that list might indicate, which is what makes it fun to compare the themes they do share. And of course those “snubs.”

(An aside: I think the Oscar people may have erred in expanding the list of Best Picture nominees to a maximum of 10. It has come to the point that what people seems to enjoy most about the Academy Award nominations is complaining about the films that didn’t get nominated, and so the fewer nominees the better. On the other hand, if there will always be more nominees in the Best Picture category than any other, that increases the amount of whining about this or that director getting “snubbed” even through the film itself was nominated.)

The Babadook, from Australia, is a psychological horror film about Amelia (Essie Davis), whose husband died in an accident while driving her to the hospital for the birth of their son. We meet her a week before the boy’s seventh birthday. (Cake is also set in the week before the birthday of a boy. I promise I’ll stop now.) Like many children that age, Sam is a handful: Relentlessly kinetic and imaginative, he has bad dreams about a monster living in his closet, and builds his own weapons of self-defense.

Suffering from nightmares of her own, Amelia is exhausted by having to forego sleep to tend to Sam’s wakefulness. The accident swapped her providing and supportive husband for a child that takes but, it must seem to her, doesn’t give her what she needs. She has no friends, can barely maintain a relationship with her one near relative, and can barely hold onto a job as an aide at a nursing home for elderly women.

Amelia is close to the edge, and gets there when she reads to Sam from a book called The Babadook, about a monster that gets under your skin and takes over your life. Sam is convinced that the monster is real, and he may well be. But if he is, just who is he taking over?

The feature debut of writer-director Jennifer Kent, The Babadook is a film that probably couldn’t have been made by a man, and probably shouldn’t be seen by some women, particularly those who are pregnant or new mothers: Its portrait of maternal exhaustion is intense and disturbing. Made on a Kickstarter budget, it borrows from horror films as mainstream as The Exorcist and the Freddy Kruger series, but is more reminiscent of shockers like Repulsion and The Shining, where we’re unsure whether the monster is real or only in the imagination of its victim. And Essie Davis (whom you may know if you watch the Australian series Miss Fisher’s Murder Mysteries on Netflix) gives a masterful performance, going from meek to ferocious in a breath.

As A.A. Dowd points out in an A.V. Club article, critics who have seen The Babadook agree that Davis’s work is Oscar-worthy, but had no chance to be recognized with a nomination—partly because the movie is shoehorned into the horror genre, but also because the Academy seldom looks outside the small pool of regular nominees. On the other hand, while almost no one aside from flacks think that Jennifer Aniston deserved a nomination for Cake, they’re all surprised that she didn’t get one, given the amount of effort she and the film’s production company have put into campaigning.

(Appearing on the Ellen Degeneres show after the nominations, Aniston referred to herself as “the number one snub.” Actually, that would be The Lego Movie.)

You can read an analysis of the Cake walk in a Slate piece by David Ehrlich, who points out that this kind of thing is not all that unusual and is in fact only to be expected given the current state of film exhibition.

On its own merits, Cake is a drama of personal regeneration about Claire Bennett (Aniston), a woman suffering as much from chronic pain as self-pity. It’s the kind of film that keeps you waiting for hard evidence of what happened to this character as an artificial way of generating drama, so I feel I’m not giving away anything to say that she was in an auto accident that badly injured her and took the life of her only child. After another woman in her support group commits suicide, Claire becomes obsessed with uncovering what her feelings were and starts digging into her final days.

It’s not as bad a film as some critics (especially Erhlich) are saying; there’s always pushback when a mediocre film gets promoted too hard. But it has a self-congratulatory air to it that undercuts its strengths. Aniston gives a good performance, but she’s photographed like a star from Old Hollywood, where glamour always trumped character.

The director is Daniel Barnz, who does adequate work (aside from the aforementioned tendency to be parsimonious with information) that is a step up from his last film, the pro-charter schools propaganda piece Won’t Back Down, which my colleague George Sax described in 2012 as a “recruiting tool for a movement that aims to substantially alter and restrict public education in this country…despite its often turgid, sentimental story line and almost blunt-force political agenda.”

The Babadook opens at the Screening Room on Friday and will play nightly through Friday, January 30. Cake opens Friday at the Amherst Theatre.