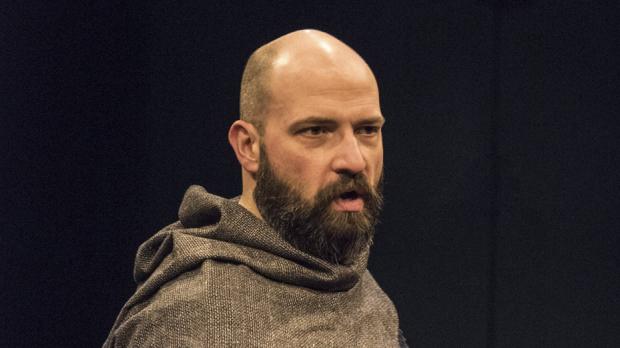 With a background in improvisational comedy, with the Eclectic Improv Company, Todd Benzin is  master of the quirky and the spontaneous. An actor who disappears into his characters, in The Lion in Winter, he is, fascinatingly, playing Prince Geoffrey, the crafty and scheming prince who somehow has disappeared into history, while his brothers Richard Lionheart and John became kings.

Below, Benzin submits to The Public Questionnaire.

What word would your friends use to describe you?
Bearded.

What quality in your current character are most unlike your own personality?
Manipulative.

What quality in your current roll is/are most like your own personality?
Intelligent.  Listen to me! Ugh.

When and where were you the happiest?
Walt Disney World with my family in 2012.

What is your idea of hell on earth?
Walt Disney World.  No, I kid.  Looking for parking at a mall/downtown event—especially with a time limit.

What is your greatest fear?
That hard work, loyalty, and trying to play by the rules will not be rewarded

Which talent do you most wish you had?
The ability to jump on stage and improvise with a band. Especially one that covers Beatles songs.

What superpower do you most wish you had?
I would love to have Jedi powers. Mind tricks, Force sense, the ability to shut off the light without getting out of bed (without using The Clapper).

What would you change about your appearance?
I’d like to look athletic just once in my life.

What trait do you most dislike in others?
Selfishness.

What do you most value in your friends?
The ability to pick up where we left off no matter how much time has passed.

What quality do you most value in a good director?
Efficiency.

What is your guilty pleasure?
Video games.

Who is your favorite fictional hero?
Obi-Wan Kenobi.

Who are your real life heroes?
My dad. As my son says, “Papa can fix anything!” Fellow actors Paul Todaro and Greg Stuhr.

What do you consider to be the most overrated virtue?
Ambition.

On what occasion do you lie?
It seems to happen most often when someone asks me, “How was work?”

What was the subject of your last Google search?
Booster car seats.

If you come back in another life, what person or thing would you like to be?
Um. A Galactic Prince. Yeah, that would be fun.

What is your motto?
“You must do what you feel is right, of course.”