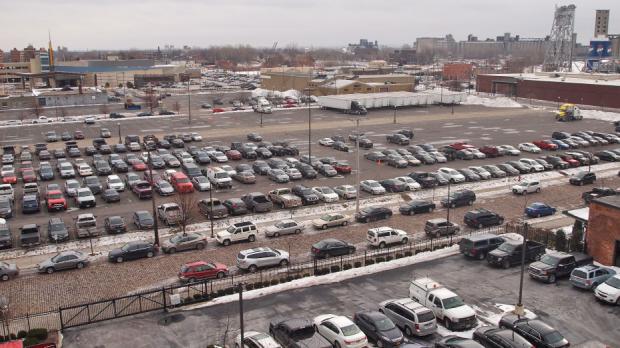 “Okay, so, where do you think the new Bills stadium should go?”

The hiring of Rex Ryan as the Bills head coach is old news already. What everyone was talking about as I went about my business on the holiday-in-name-only known as MLK Day seemed to be the new stadium. Where should it go?

One popular candidate seems to be the vicinity of the Perry Housing projects. That site would accomplish two goals. It would eradicate a largely African-American urban community and it would be close enough to the area now known as Pegulaville to give new meaning to the slogan “One Buffalo.”

Like the story of the three bears, though, there are other options. They could build the stadium in Orchard Park. So, status quo. This idea seems to be getting the cold shoulder.

There does seem to be a third option that’s just right, however. It’s even closer to Pegulaville and it would raise the real estate value for the Buffalo News mausoleum at Washington and Scott Streets. “Welcome to Pegula Canalside stadium for the 2020 Buffalo Bills season-opener against the Los Angeles Raiders!”

Can’t you just hear John Murphy or his lower-paid replacement uttering a phrase like that to the joy and exhilaration of Bills fans?

All doubt and critical analysis are being swept away. To borrow from the late great segregationist George Wallace: It’s Bills now, Bills tomorrow, and Bills forever.

The Pegulas and the Buffalo News have mobilized great public support for a new, publicly subsidized television set for the NFL Networks reality series known as the Buffalo Bills. But consider this: We may be reaching a cultural crossroads with the sport of American football that will bring about a cultural shift as unimaginable as desegregation was to Wallace’s constituency at that time.

Like any cultural shift, the end of American football might be so gradual as to be imperceptible. Admittedly, to consider such a notion is counter-intuitive, if not downright crazy. The sport’s popularity, if anything, seems to be going through the roof.

Before one red cent of taxpayer money is spent, though, NFL commissioner Roger Goodell should be made to address the following laundry list of problems.

Reasons American football is in trouble:

Amusingly enough, the violent macho gladiator sport American football relies on the support of mothers. Does the “Hi, mom,” athletic camera shot ever get old? Unless there are some drastic changes, more and more mothers are likely to pull their kids out of concussion sports, whenever possible, now that the pervasive seriousness of head injuries is more commonly understood. More often than not it’s the mothers of athletes who are the financiers, chauffeurs, coaches, and nurses of wannabe hall-of-famers. There are plenty of other character-building, competitive sports available that are less hazardous.

In all seriousness, I’m in no way suggesting that the injustice of segregation can be compared to American Football. Perhaps a better analogy would be smoking. If you walked into a gin mill in Buffalo in the 1990s and announced that smoking would be banned in every bar and restaurant within 10 years, the barkeep would probably have asked you what you were smoking. Changes just over the horizon are often impossible to see. It doesn’t mean they aren’t coming.

One of the favorite highlight reels for a Bills fan is undoubtedly the comeback over the Houston Oilers. One image that has since been erased by NFL films is the lone Bills fan rising from his seat clapping his hands with a cigarette dangling from his mouth. In the background (at least as I remember it) is the giant Marlboro billboard. The iconic sequence of the Bills comeback Marlboro man magically rising to summon his team to respond to the call of destiny has been erased from history. Is it crazy to think that some day the very sport itself could follow him into oblivion?