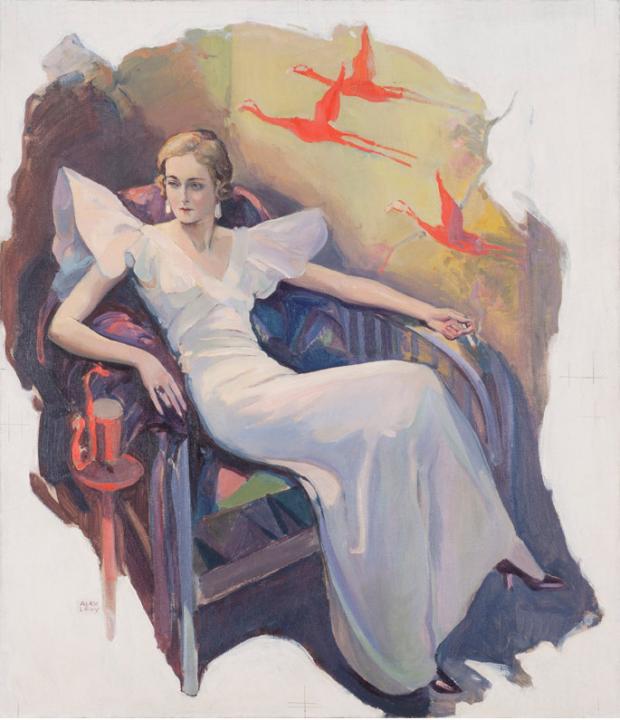 Why aren’t we more aware—haven’t been more aware—of this superb Buffalo artist of the first half of the twentieth century? It’s a question the Alexander Levy major exhibit at the Burchfield Penney Art Center tries to put to rest, giving the artist some due recognition. But also tries to answer. Why?

It’s complicated. Levy was complicated. He was an excellent painter and more than somewhat of an original. One of the inventors and supreme practitioners of the phase of aesthetic Modernism known as Art Deco, he squabbled—about aesthetic matters mostly—with fellow artists and non-artist powers in the art world. In doing so, he stood firmly in opposition to a much larger phase—indeed, the dominant trend—of Modernism, namely abstraction.

But more than that, even. Near the beginning of the exhibit are a number of his greatest and most characteristically Art Deco works. Portraits of young women mostly, handsome, lovely, in languorous poses, lounging, taking tea, in dresses that may have been afternoon casual wear for ladies of that social class in that era—in and around the 1920s—but now look more like special occasion evening wear. Art Deco was an elegant style—linear, luminous, seductive, in broad swaths of pallid pastel tones—most appropriate for and much given to the depiction of elegant subject matter, elegant people, tall, attractive, privileged, rich. People of leisure. Some of the portraits of young women remind me of some of the women of Downton Abbey. Rose, the daughter of an old family friend come to live with the Granthams—pretty, flirty, flighty. Mary, the serious eldest daughter, a young widow, stunningly beautiful and heir apparent to the grand estate, and so well-supplied with suitors. But just as Downton Abbey—that whole mode of existence, privilege, leisure—was doomed by the sweeping social and economic turmoil related whether causally or coincidentally to the First World War and effects, so Art Deco as an aesthetic mode—in terms of its form, in terms of its subject matter—was doomed by the new general sensibility informed by the same war, the Depression, a second great war, and post-war spirit and reality of prosperity not noticeably so much affecting the legacy upper class, but more conspicuously the middle class.

In addition to his particularly Art Deco works—primarily indoor scenes featuring human figures, including the portraits and some allegorical works—one called Vanitas, really just an excuse for another enticing female—and exotic scenarios—several in harems—ditto on the female figure excuse, with the added enticement of nude or semi-nude—his other significant genre was outdoor scenes, landscapes, mountainscapes. These had Art Deco stylistic elements—linearity, certain formal simplifications, formal distortions—but otherwise consisted of a heady mix of traditional representational styles and techniques. And were a world away from the soft life world of the more characteristic Art Deco work. Rugged terrain usually, in harsh weather. A sense of desolation. A sense of human existence as clinging to a precipice, sometimes literally. Less typical among the outdoor paintings are some bucolic scenes. Several of family picnics on the grass in what looks like Delaware Park. One of sledding on a hill in Delaware Park. A single stunning depiction of bathers in colorful costumes at the beach. The bucolic works tend more toward authentic Art Deco.

Other works include some delightful Buffalo genre scenes, such as of shoppers at the old Washington Street open-air market—now a bank parking lot—and one of the Broadway Market when that venue was still al fresco, under the looming towers of Corpus Christi church.

As well as some rather earnest looking—even a little grim—religious pictures. Jewish or Christian orientation, depending on the commission. And war bonds patriotic posters and such from the World War II era.

Levy started out life in Cincinnati, then relocated to New York City, and in 1909 to Buffalo, for a position as art director for the Matthews Northrup Company. In 1913 he took a similar post with the Larkin Company. Meanwhile, he was an active member of the Buffalo Society of Artists, and while gaining attention and renown nationally—his work appeared in the Saturday Evening Post and other national magazines and was exhibited in galleries in New York City, Chicago, Philadelphia, Detroit, Cincinnati, and Pittsburgh, as well as at the Albright Gallery here—was an ardent supporter of the cause and work of local artists. In the early 1930s, relative to a decision by the Albright Gallery to discontinue keeping a space dedicated to regional artists, Levy accused the gallery of “class bias” and “ignoring the interests of local artists.” That must have ruffled some feathers. Later in the ’30s, as president of the BSA, he became vociferous against the growing trend toward abstraction in art, going so far as to sponsor a regional chapter of the extremist Chicago-based Society for Sanity in Art. His opposition to abstraction precipitated a splintering of the BSA, when a portion of the society broke off to form the Patteran Society, dedicated to producing and promoting the new art mode.