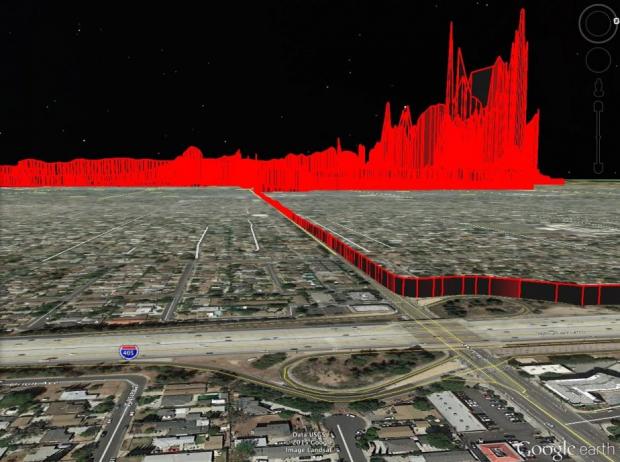 This data visualization shows the methane plume from the Aliso Canyon gas leak (in red) extending well beyond Porter Ranch on the right to neighboring Northridge on the left. The readings for this visualization were taken on Jan. 12, 2016. Courtesy of Inside Climate News, Home Energy Efficiency Team, and Google Earth.
by
Jay Burney
/ Jan. 19, 2016 6am EST

There is a terrible thing going on in California in the San Fernando Valley just 30 miles from Los Angeles at a place called Porter Ranch. The area is home to 1.8 million people.

A natural gas storage center called Aliso Canyon Facility, owned by Southern California Gas Company, is the location of a methane (natural gas) leak that has quickly become one of the nation’s greatest environmental disasters. The disaster is arguably worse than the BP/Macondo/Deep Water Horizon disaster in the Gulf of Mexico.

The California Aliso Canyon Facility is a depleted oil field that can hold 86 billion cubic feet of natural gas. It is the second largest natural gas storage facility in the U.S.

After months of controversy, last week, California Governor Jerry Brown declared a state of emergency. Although it is hoped that this declaration will help, it may take months to fix the spewing well hole.

The cause of the leak, much like the BP disaster, is decaying infrastructure. Regulatory and corporate neglect allowed this and who knows how many other wells and facilities to go decades without inspection. The source of the leak is a faulty injection well over a mile deep. Originally drilled in 1953, it appears close to being unfixable and has spewed more than 83,000 metric tons of this deadly gas since the leak was reported on Oct 23. Estimates say that it is leaking 110,000  pounds of gas per hour. That’s the equivalent of the amount of greenhouse gas emissions of 7 million cars every day. The last time that this broken deep well was inspected is said to have been 1976. At that time it was discovered that the safety valve on the well was broken. Four years later, in 1979, records show that the broken valve was removed. Not replaced, just removed.

We know that on the bottom of the Gulf of Mexico there are at least 27,000 abandoned wells. We do not know how many old, abandoned, uninspected and forgotten wells there are associated with natural gas storage facilities. With no inspections each one is a ticking time bomb and some are going off.

Late last summer the terrible Porter Ranch leak was detected when the noxious odor of commercial natural gas, caused by the addition of mercaptans, began to permeate the nearby Porter Ranch neighborhood. Pure methane is both deadly to humans, and odorless. The additives are designed to alert people to the presence of the gas.  You have probably smelled the gas in your home if you use natural gas for cooking or heating. It is a good warning sign. Right now, people exposed to the widely spreading California toxins are very sick. Evacuations have been underway for weeks.

In an article from Inside Climate News, Nathan Phillips, an Earth and Environment professor at Boston University, described what may be in the gas beyond the mercaptans. “Whatever else may be in the gas—benzene, toluene, xylene —that is what people may be breathing,”

As a greenhouse gas, methane is very potent. For instance can trap up to 30 times more heat than CO2. Active known natural gas leaks from a variety of decaying infrastructure systems including pipes beneath our streets is a huge threat to the climate and as a greenhouse gas may very well be the primary contributor to climate change.

This is a bad damned thing.

Click here for a primer on how bad methane is.

Return of the Los Angeles smog basin
It wasn’t that long ago that we pioneered auto emissions standards in large part because the Los Angeles basin between the mountains and the ocean stimulated temperature inversions that turned Los Angeles into a crippling smog central.

Now, with this new disaster, that human made air pollution in Los Angeles has returned with a vengeance.

We are Seneca Lake
Today there continues to be a huge natural gas controversy in New York State.  It was just last year that Governor Cuomo’s administration decided to make hydraulic hydrofracking for natural gas illegal in New York State. The repercussions of that action continue to stir the political pot across the state. Many champion the Governor’s decision as an environmental win, while others claim that the restrictions on extracting the gas are economic bombs to the oil and gas industry and those that continue to depend on hydrocarbons for energy.  In the Finger Lakes, a Texas based energy company—Crestwood Midstream—is working to turn abandoned salt mines under Seneca Lake and beyond into storage facilities for highly pressurized fracked gas products including methane, propane and butane, and liquefied petroleum gases. The intent is to create a huge transportation and storage hub for these products that would service the entire northeast. This would become, like Porter Ranch, one of the largest natural gas storage facilities in the USA.

A citizen based organization We are Seneca Lake has evolved to oppose the development and protect the Finger Lakes from potential disasters, just like the disasteer we are witness to at Porter Ranch. The efforts by this grass-roots group are very serious and we have written extensively about these issues.  Recent and ongoing arrests of protestors including people of all ages has raised the recognition of this ticking Finger Lakes time bomb to an international level. Today, on Martin Luther King Day, Sandra Steingraber posted  a statement at the We are Seneca Lake website “Seneca Lake Stands With Porter Ranch: shut it all down.” Click here to see.

The NFTA’s natural gas powered fleet
Meanwhile methane, the potent greenhouse gas, is still promoted as a green alternative to oil and carbon releasing hydrocarbon fuels. Natural gas is widely used which makes the kind of infrastucture at Porter Ranch and Seneca Lake remain as priorities to the industries that rely on the fuel source. The profitability of natural gas remains a problem for the climate.

In Western New York, our own Niagara Frontier Transportation Authority, like many transit systems across the world, continues to use and help to market natural gas as a “cleaner greener” climate change strategy. The NFTA natural gas fleet is increasing. Despite widespread debunking of this fuel as a safe and green alternative or as a product that should be thought of as a transitional energy strategy, it is still promoted as a “green” alternative. Natural gas is a so-called “green product” that is worth watching, and so we do. We are always concerned that the “green” label is a “greenwash” that has economic value (profit) while at the same time is an environmental and ecological concern. Or disaster.

What the industry says about natural gas
The NFTA and natural gas supporters say that natural gas burns cleaner than the alternatives (less emissions when burning) and this fuel remains economically viable, at least for this agency. This drives the move toward a natural gas powered fleet at the NFTA.

In a recent press release Kimberley A. Minkel, NFTA executive director stated, “I want to thank our federal and state delegations for their collective efforts in securing essential funds for these vehicles. This investment in New York’s transportation infrastructure magnifies the ongoing synergy between public transit investment, job creation and economic growth in western New York and further enhances the current fiscal stability of the NFTA in the process.”

Nineteen additional full size buses will be phased into service by February 1. The remainder of the 44 buses (24) are expected to be carrying customers throughout the region later this summer.

Procurement of these vehicles is supported by $3.8 million in new New York State Accelerated Transit Capital funding provided to the NFTA through the 2015-16 New York State budget.”

And there is more:

New CNG Fueling Station
A $5.9 million state-of-the-art CNG fueling facility at Metro’s Frontier Bus facility, 1000 Military Road, Buffalo, is in the commissioning phase and buses are presently being fueled as part of the process. The facility is expected to be fully operational January 25. The fueling station encompasses one and a half acres and features two 250-hp compressors, producing 700 standard cubic feet per minute that will serve four fuel dispensers. A twin tower dryer, control building, electric motor and control distribution wiring and control system are also part of the project. The functionality of the station will more than cover Metro’s needs for the immediate future, but the facility can be expanded to meet new demands going forward.

The NFTA’s defense of natural gas includes these arguments:

“Compressed natural gas is an effective alternative fuel for public transportation; it also provides some freedom from the diesel fuel market. Natural gas at Metro’s fueling facility will be 99 percent American sourced. Through the course of their lives, these Metro CNG buses will save the atmosphere from more than 1,300 tons of carbon. It produces less unburned hydrocarbons, carbon monoxide, nitrogen oxides, sulfur oxides and particulate matter than gasoline.”

“Although the price of natural gas does fluctuate, it is consistently below low sulfur diesel. As such, it provides the authority with much needed budget stability for a major commodity.”

“Natural gas has a number of safety advantages over diesel fuel. It is non-toxic, non-corrosive and will never contaminate ground or water. CNG is stored under high pressure but the range of flammability is much narrower than gasoline. CNG will not burn at concentrations below 5 percent or above about 15 percent when mixed with air. The flashpoint for gasoline is 250 degrees Fahrenheit, whereas the flashpoint for natural gas is 1100 degrees, making the risk of fire much lower.”

“Natural gas is lighter than air and dissipates if leaked.”

Yes, and it is dissipating all over the San Fernando Valley and probably in your backyard. While these arguments are important in the defense of why we choose this fuel source and these public investment strategies, are they good enough in the face of the kinds of climate emergency that we are now rolling deeply into. More importantly, why can’t we do better? The anwer lies within each of us.