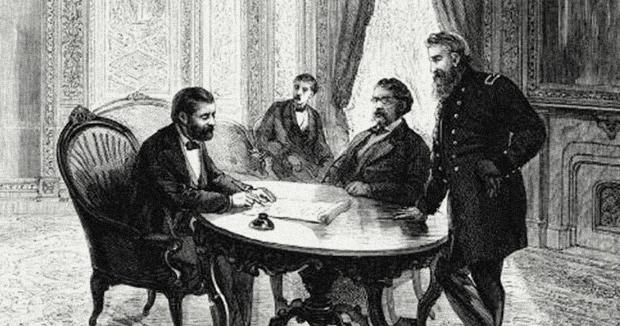 U.S. Grant crushed the Confederacy in the Civil War. After he became president, he waged a second war — against the Ku Klux Klan. His victory over the Klan helped propel him to a massive re-election victory and a nearly 3 to 1 congressional majority.

The good news for the United States of America is that we are about to witness the first steps of a campaign Grant would recognize: a vigorous, law-based rejection of the violent white supremacists and of Lost Cause militants who could have, but failed to, murder our democratic republic on January 6th.

The 2021 Democratic majorities in the House and Senate can be expected to take action on suppressed and ignored reports on domestic terror from the agencies that Trump sidelined. The National Counterterrorism Center, the FBI, and the Department of Homeland Security will now be able to work with a new White House team: the counterterrorism center reports to the Director of National Intelligence, Avril Haines, former deputy director of the CIA.

The heft of the incoming national security leadership is reassuring. Federal prosecutors have the most current information, but one observes that the United States Attorney for the District of Columbia, and his peers in the other federal judicial districts around the country, have had enormous citizen assistance with Trumpers’ cellphone selfies of their Capitol activities.

Grant biographer Ron Chernow described how the then-new Department of Justice prosecuted over 3,000 cases resulting in convictions of over 1,300 Klan terrorists in 1872 alone. The numbers in Biden’s first term will, one expects, be comparable.

Cellphone GPS data has already been collected and distributed to airlines, to the effect that Trump’s mob members have been barred from flying home. These attackers furnished the evidence that will put them away. Leaders, organizers, conspirators as well as those who attempted assault, kidnapping, or murder, plus the mosh pit — they all left photographs, and Parler, Facebook, Instagram, Gab, and other cookie-crumb trails.

These are not the thousands of “little green men” that Vladimir Putin sent into Ukraine. They are not a division-strength, disciplined military force equipped with all the latest technology.

Numerically tiny, they are nonetheless a very loud political force that has completely cowed the Republican party — a force that will continue to intimidate, bully, and poison with all the help that nihilistic billionaires, Russian internet operations, and a shrinking but still huge media network offer.

The crowd that stormed out Capitol numbered about 8,000. It took many Trump speeches, months of online organizing, and daily Fox News and Rush Limbaugh support to get them there. Fox News in June 2020 reported a Washington DC police estimate of 200,000 protesters at a Black Lives Matter March. Outrage over injustice draws big crowds without presidential incitement.

The lesson: we should be alert, but we should not fear.

Trump guys waving Trump flags from the beds of a dozen or so pickup trucks rolled through Lockport, New York, on the Sunday afternoon after the January 6 Capitol takeover. The Trumpers had their priorities: they rolled on Sunday afternoon, not on Saturday afternoon, when the hometown Buffalo Bills were winning their Wild Card matchup against Indianapolis. Good friends of ours in Lockport went to Facebook to express their worry that the violence of January 6 was going to come home.

The political display will linger. And as the psychiatrists argue, the sense of relative deprivation that feeds this rage-dusplay can only be dealt with by policy — policy that puts dollars back into pockets, dollars to calm wounded pride.

But why the rage? The Buffalo area is typical of most of the places where little, aggrieved men fly their Trump flags. It’s one of those radically deindustrialized Rust Belt communities that has seen a rise in Trumpist expressions even though the home county of the Buffalo Bills went Obama, Obama, Clinton, Biden in the last four elections. So did the bigger metros in Michigan, Wisconsin, and Pennsylvania.

But it’s in the smaller counties in those same states, communities that have experienced endless trauma since China joined the World Trade Organization in 2001, where one-time Obama voters tipped Michigan, Pennsylvania, and Wisconsin to Trump in 2016 and would have done so again had not Working Class Joe slightly calmed the waters.

The political problem in the Buffalo media market is typical. Of the two area House members, the big-city congressman is reliably Blue; the core of the big metro has had a resilient, diverse economy that was growing until Covid-19. But the second CD, made up of the suburban, small-town, and dairyland area, has a new congressman who is a Trump captive. The newbie joined a majority of his Republican House caucus in objecting to recording Biden’s electoral votes only hours after Trump’s thugs busted inti his new workplace.

Around 130 of the Capitol crowd came from Bills country. Among them: members of a group that calls itself The Watchmen. The US Attorney for the Western District of New York is on the trail of locals with the help of video showing one if them setting fire to journalists’ cameras. The local sheriff didn’t go, but it may well be that some of his staff did. He is a member of the Constitutional Sheriffs Organization, a political vehicle of Joe Arpaio, the former Tucson sheriff whom Trump pardoned after failing to avoid the hoosegow despite claiming, as CSO claims, that sheriffs (not judges, not elected legislators) decide what’s Constitutional.

The macho swagger, the preposterous legal theories, the Stars and Bars, the bellowed threats of lynching — these are not fearsome as military threats, but they are features of politics in the fringes of prosperous metros.

Criminal cases by the hundreds are going to be brought in federal district courts all around the United States (one hopes that that will happen in Buffalo, too). The cases are very straightforward. Middle-aged white men with fascist sympathies will be going to jail.

The question is whether the new administration will seize the moment, as Grant did in 1872, to put the hammer down. The question is about to be answered in the affirmative.

Two follow-on issue will be harder. Democrats who have embraced financialized capitalism and discourses of minority deprivation have been inarticulate, until Biden, about trade, deindustrialization, and the community-grinding processes of depopulation and economic decline in the Rust Belt. Biden has already committed to a policy spectrum aimed at restoring economically traumatized communities, but it will take time.

The second issue: breaking the rage merchants’ grip. They won’t yield easily. The politics of the Lost Cause thrived in what Grant called the “so-called Confederate states” until — when? How sad that it’s fading in Georgia, but on some Sundays rolls on in the Rust Belt.