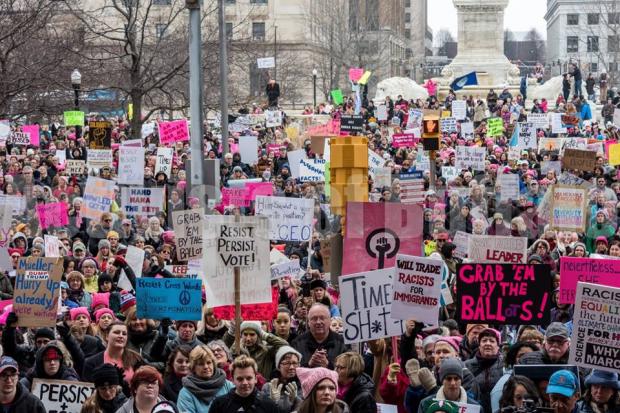 This year’s local Women’s March is coming right up Sunday, January 20, 1:30-3pm, at Niagara Square in downtown Buffalo, giving all Western New Yorkers the opportunity to come together to stand up for people and the planet.

Achieving record-breaking crowds for the past two years—approaching 4,000 and 5,000 in 2017 and 2018 respectively—organizers at the WNY Peace Center are even more excited about this year’s march and the local goals selected by the collaborative Women’s March Buffalo/WNY Planning Group. The local goals will feed into ongoing local campaigns.

The local goals’ topics are Women’s Right to Equality in Business and the Workplace; Women in Government; Healthy & Empowering Education Spaces for Girls & Women; Women’s Right to Health; Women’s Right to Safety and Freedom from Violence; and Care for Mother Earth. Getting women on Common Council; passing County Law 78 (submitted by Erie County Legislature Majority Leader April Baskin to institute a professional advisory board with teeth to oversee the Erie County Sheriff’s Department); full clean-up of West Valley; no Northern Access (fracked gas) Pipeline; and Buffalo as a Sanctuary/certified Welcoming City are some of the goals. More detail is at wnypeace.org and on the WNY Peace Center’s Facebook event page.

The mMarch is co-sponsored by a committed and diverse group of 58—and counting—organizations, including the AFL-CIO, NAACP, NYCLU, Open Buffalo, PUSH Buffalo, Sierra Club Niagara Region, Veterans For Peace #128, Jewish Voice for Peace, Interfaith Peace Network, the vital WNY Women’s Foundation, and more.

The rally portion will include music from WNY [Women’s] Resistance Revival Chorus, and Ismail & Co; with songs/skits/expressions from youth groups including Confident Girls Mentoring Program, Girls Inspire, Pretty as a Daisy, PeaceJam Buffalo, and representatives of the Lifesavers (the Stop the Violence Coalition youth group).

Controversy over the National Women’s March leadership team, including accusations of their being anti-Semitic, are not quelling the Women’s March Buffalo/WNY. “[We work to] open up the conversation, for people who are willing…to work across the table on commonalities, build trust with one another, work towards common goals and begin to break down walls of oppression,” said WNY Peace Center assistant director Silver Light.

“That’s part of trying to ‘be the change,’ trying to live up to our principles. Denouncing and cutting people off doesn’t help us build community, or live up to our ideals,” said WNY Peace Center executive director Vicki Ross. Local Jewish women have committed to participating.

The march will be from the east side of Niagara Square, up Delaware past the US Courthouse and the US Immigration Court; going east on West Mohawk; then south on Franklin past county offices/Old County Hall; right onto Church headed west to Delaware Avenue; then going north on Delaware past the Erie County Holding Center and back to Niagara Square.

Come on out and make this year’s Women’s March Buffalo/WNY another community-building, energizing, record-breaking, and auspicious event as we #UnitetheStruggles and embolden the #WomensWave.