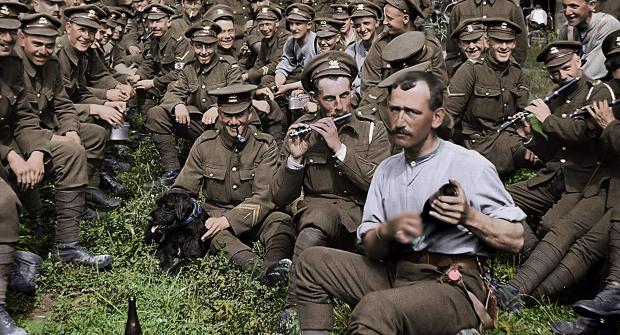 For as long as I’ve been writing about movies, I have never understood the thinking of the people who market and distribute them. Take the case of They Shall Not Grow Old, Peter Jackson’s documentary using lavishly restored footage of soldiers from the First World War. It has received rave reviews, and public interest in it is extremely high. The billions of dollars Jackson made with his six Lord of the Rings and Hobbit films alone should be enough to make the marketers swoon.

Yet Warner Brothers won’t give it a proper theatrical release, limiting it to special event screenings in limited cities. It will be at the Dipson Amherst next Monday, January 21, for two shows only. Advance tickets are available at the theater’s website: If you want to see this in a theater, you would be well advised not to wait until the day of the show to your tickets.

Jackson, whose grandfather and great-uncle died in the war (the former after more than 20 years of suffering from his injuries), set out not to provide an overview of the war but to bring to life the men—boys, really, for the most part—who fought and died in it. He was commissioned by the BBC and Imperial War Museum to take hundreds of hours of film in their archives, most of which had never been seen by the public, and turn it into a 30-minute documentary to commemorate the centennial anniversary of the end of the war.

He was a wise choice. His experience in special effects technology over the past 20 years made him aware of everything that could be done to restore this grainy old footage to a condition that would engage modern audiences: restoring the image quality, adjusting the speeds, and colorizing it.

That last would once have roused the ire of the film community: You may remember the hue and cry that greeted Ted Turner’s attempts to colorize classic black-and-white movies in the late 1980s. But this is different. For one thing, the technology is far superior. And what Jackson was working with was documentary footage that attempted simply to capture what the eye saw. That’s different from a Hollywood film in which the director of photography, the lighting designer, the costumers, make-up artists, set designers, and everyone else was working with a knowledge of how their work would appear on black-and-white film.

Jackson, by contrast, had the desire and the ability to recreate the experience of war the way those who fought it saw it. More importantly, he wanted to bring the faces and bodies of those soldiers to life in a way that would not allow the viewer to disengage from them. And at that he succeeded spectacularly.

As vivid as his footage is, though, arguably what fully brings the experience to life is the soundtrack, composed of voice recordings with men who fought in the war. He has taken the voices of more than 100 interviewees compiled in the decades after the war and woven them into an almost seamless commentary on what we are seeing. Given the amount of material he was given to whittle down, the effort must have been Herculean. Jackson even went so far as to employ lip-readers to figure out what anyone visibly speaking on camera was saying so that he could have an actor speak those lines.

What They Shall Not Grow Old is not is grim, at least not as grim as you might expect. Jackson has said that it was important to him to find the humor in these lives, because that was all they had to hold themselves together under utterly awful conditions. Given the endless detail of ill-fitting clothing, non-existent sanitation, lice, food, latrines, brothels, rats, and on and on, you come away with the impression that the Germans they faced across the trenches were the least of their worries. It’s no surprise that many of the voices we hear speak of empathy for the Germans, who were in every important way in the same situation as them.

Despite the horrors it eventually portrays (as unflinchingly as everything else), They Shall Not Grow Old is finally not a film about war. It is a film about soldiers, and one of the best ever made on the subject.