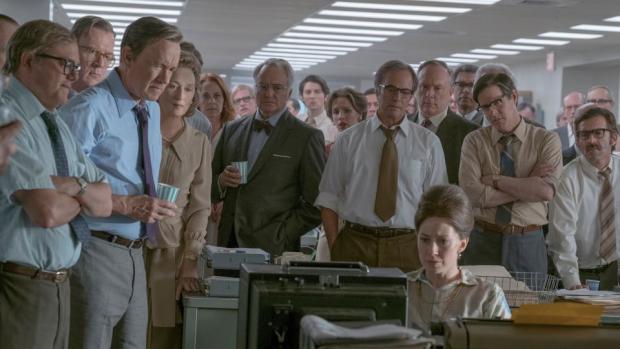 The Post, Paddington 2, The Commuter, This Giant Papier-Mâché Boulder Is Actually Really Heavy

As a dramatic location, you can’t beat a newspaper office in the pre-computer era. If anyone ever makes a movie set in the offices of a major newspaper in 2017, they won’t need a tracking camera to follow editors around the offices as they interrupt reporters furiously banging on manual typewriters. Nor will that movie have the benefit of giant clanking presses to visualize the importance of it all.

The Post is set in 1971, and it takes advantage of all that stuff. But Steven Spielberg’s movie, which tells the story of the Washington Post’s struggles to publish the top-secret Pentagon Papers, is no more about Nixon era politics than The Crucible was about the Salem with trials. Rushed into production earlier this year, The Post is clearly about the need for a free press to stand up against the lies that fuel Trumpism.

Which is not to say that it isn’t a canny piece of dramatic entertainment. Tom Hanks may not be able to get into a character as complex as Post editor Ben Bradlee, but he isn’t really called to, and he’s just fine at rousing bluster. Similarly, the Katherine Graham that Meryl Streep is asked to play is probably more cowering and timorous than the real lady who became publisher of the paper after the death of her husband, but that makes it all the more inspiring when she stands up to the personal and financial advisors who want her not to rock the boat. (Several scenes of women lining up to see Graham in public places have clearly chosen appealing to a contemporary audience over verisimilitude.) The real acting comes from a less expected role, Bob Odenkirk’s portrayal of reporter Ben Bagdikian, who was instrumental in getting a hard copy of the papers after the New York Times was enjoined by Nixon from publishing them.

Enjoyable as it is, The Post may not meet the measure of success that Spielberg probably wants: Will it inspire Americans to remember our real values, or will it only preach to the choir? Bradlee’s earnest plea that “The way they lied—those days have to be over. We have to hold them accountable. If we don’t, who will?” may, in the long run, be seen with bitter irony as a cri de coeur for a battle that was lost years ago.

On the topic of films that are not what they may appear to be, don’t be fooled into thinking that Paddington 2 is a children’s movie. That’s not to say that it isn’t appropriate for kids, and if you are tasked with the care of any by all means take them to see these newest adventures of the “short but polite” talking bear, as good a role model as you could ask for. But it takes an adult to truly appreciate Paddington’s good nature, so lacking everywhere you turn. (The trailers for two upcoming animated movies, filled with fart and ass jokes, that opened the show drove this point home.) Likewise, kids are unlikely to derive full pleasure from such sights as the Downton Abbey’s Earl of Grantham, a.k.a. Hugh Bonneville, doing yoga splits, or Dr. Who (Peter Capaldi) as a neighborhood crank, or The IT Crowd’s Richard Ayoade as a forensic investigator. (Director Michael Bond is best known for the cult comedy show The Mighty Boosh, so it’s no surprise that this is a bottomless font for Anglophiles.) Best of all is Hugh Grant as a villainous ham actor who gets to dress up in any number of ridiculous costumes before ending the film with a production number that only Mel Brooks has ever matched.

Still, perhaps you are not the sort of viewer who appreciates a film in which people blurt dialogue like, “I have just been spilled upon by chilled liquid!” In that case, you may find The Commuter more to your liking. The latest of Liam Neeson’s roles as a kickass action star (surely the most unexpected career shift in acting history since Leslie Nielsen turned to comedy) reunites him with director Jaume Collet-Serra, who has made better-than-average use of Neeson in films like Unknown, Ride All Night, and Non-Stop. Like that last one, which was set on an airplane in flight, The Commuter takes place almost entirely on an evening train out of Manhattan to the suburbs. Neeson’s character is again tasked with a mystery to be solved before it reaches its destination, about which the less said the better. It’s not as well-tooled as Non-Stop, and if I hesitate to lay out the mechanism of the plot it’s partly because discovering it in the movie is better than how it plays out. (I had a lot of “But what about…” questions on my way out of the theater.) The proceedings have just enough action to keep you awake without making you feel bludgeoned, if not quite enough plot to make you feel that it was worth all the build up.

You may suspect that any film called This Giant Papier-Mâché Boulder Is Actually Really Heavy is unlikely to be as interesting as its title. That depends on how much of a fan you are of cheesy old science fiction movies, or of Star Wars. Made in New Zealand on a budget that probably went entirely to film editing software, this comedy takes a trio of geeks at a sci-fi convention into the movie they’re watching. Literally. Writer-director Christian Nicolson, who also had to become the film’s star when his actor quit at the last minute, clearly spent as much of his youth watching Monty Python as he did Flash Gordon and The Giant Gila Monster. He cheerfully turns his shortcomings into an advantage, or at least a joke, and if it gets tiresome along the way rouses itself for a likeable ending. Those who check it out at the Screening Room this week may bear in mind that making no-budget genre spoofs in New Zealand was exactly how Peter Jackson got started.