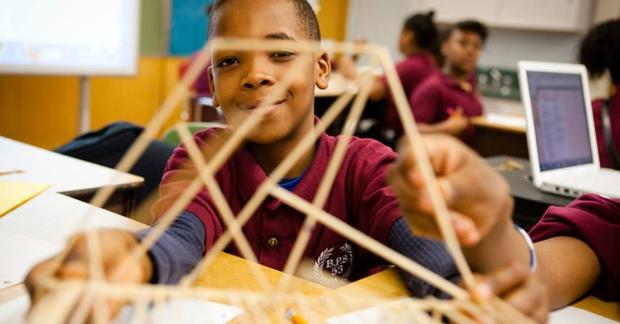 Fruits of collaborations among volunteer professional architects, university students, and teachers and students in some Buffalo Public Schools are currently on exhibit at the CEPA galleries.

Projects on display range from a colorful construction paper and cardboard community of block forms and silos and teepees and—for good measure—one pirate ship by Bennett Park Montessori pre-school, pre-kindergarten, and kindergarten students, to one about some rather more sophisticated architectural considerations, like tension and compression forces, positive and negative spaces, and light and shadow effects, by Visual and Performing Arts Academy high schoolers.

In another project, the Visual and Performing Arts students considered ideas about confinement and liberation and imagined these concepts as sculptures. Liberation as a butterfly emerging from a cocoon, or a bird escaped from a cage. Confinement as a person in a cage. Or more abstractly, a black ring of spikey forms projecting inwards.

The Bennett Park Montessori students also did a project called “The Bennett Park Building Sculpture,” based on a sculptural work by Syrian architect and artist Mohamad Hafez that looks like urban war ruins such as we’ve seen too much of in recent news footage from Aleppo and Raqqa. The student project involved thinking about basic human needs—food, shelter, and clothing, but also personal safety, and spiritual needs in the largest sense of the term—and construction of a sculptural tower community built on an open suitcase, symbolic of preparedness to hurriedly leave whatever current living arrangement in the event of war or other perhaps environmental calamity. The Montessori students also made of list of occupational categories that answer to basic needs. Police and firefighters and architects near the top of the list. Lower down on the list, teachers, farmers, and artists.

Olmsted Middle School eighth graders worked on a multi-part project called “The Architecture of Poetry.” They learned about architectural design principles and elements through a visit to architect Frank Lloyd Wright’s Darwin Martin House and observation of their own school building, the Art Deco former Kensington High School. They then studied how poets use similar design principles and elements in constructing poems. Then wrote their own ekphrastic poems—basically, poems about art, or in this case, architecture—about architectural examples of their choosing. And built models of the structures they wrote about, which are on display along with some of the poetry. Michael Marks’s poem is about various aspects and qualities of the hemisphere main fireplace of the Darwin Martin House. He writes: “…the red and the gold, / As if the sun had split in two…” Brian Manning’s poem is entitled “Big, Tall, and Ugly,” about an unidentified architectural example that could only be the former HSBC building that straddles lower Main Street like an eyesore colossus. Manning writes: “Tall, ugly, tan…what were they thinking?” His suggestion is to tear the monstrosity down.

School 53 Community School kindergarteners worked on basic structural forms and made popsicle stick houses and the like. Second-graders learned about maps and landscape categories—urban, suburban, rural—as groundwork for planning an ideal community. Their centerpiece work is a civic center sculptural model of a city with interspersed commercial and residential areas, and plenty of green spaces. Third-graders did a project called “Jefferson Renaissance.” They redesigned Jefferson Avenue to provide more amenities and answer to the full scope of area residents’ needs. The redesign included a community playground and garden, a bakery, a police station, more housing, an ice cream parlor, a hotel, and a community pool. Another third-grade project was called “Then and Now.” The students compared community maps from the early 1900s with present day maps. One thing they noticed was the number of “voids,” that is, empty and unused or underused spaces now versus then. The project included building three-dimensional models of community segments with prominent empty areas, and making two-dimensional collage illustrations of some possible infill for the blank spaces. Ideas for public gardens, playgrounds, handsome to spectacular architectural additions for new restaurants, a movie house.

And DaVinci High School students did a project called “Geoluminaries” in which they made lanterns—somewhat like jack-o’-lanterns—intended to project patterns and colors on surrounding walls or whatever.

This exhibit is a short-timer, only a week in duration, continuing through Friday, January 19.