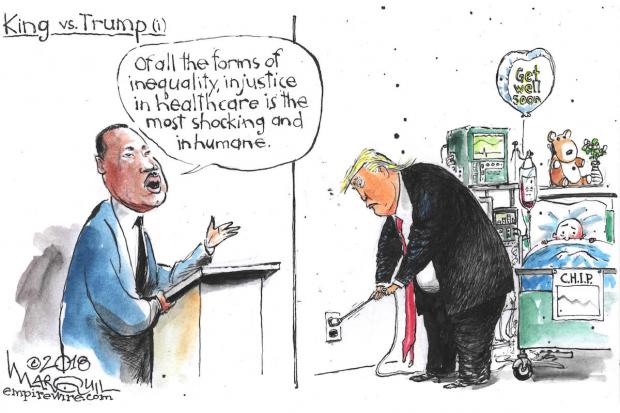 WHAT WOULD SENATOR MOYNIHAN SAY?

During the Senate’s 1996 debate over a bill to reform welfare in America, Senator Daniel Patrick Moynihan rejected its treatment of children.

As I have stated on this floor many times, this legislation does not ‘reform’ Aid to Families with Dependent Children; it simply abolishes it. It terminates the basic Federal commitment of support for dependent children in hopes of altering the behavior of their mothers. We are putting those children at risk with absolutely no evidence that this radical idea has even the slightest chance of success.

In our haste to enact this bill—any bill—before the November elections, we have chosen to ignore what little we do know about the subject of poverty…the premise of this legislation is that the behavior of certain adults can be changed by making the lives of their children as wretched as possible.

The Urban Institute estimated that the bill would cause 1.1 million dependent children to fall below the poverty line.

As Republican lawmakers celebrate the passage of a tax bill that will make the wealthiest Americans richer, many lower income families are faced with the real possibility that their children will soon lose their health insurance because Congress didn’t care enough to renew funding it (the Children’s Health Insurance Program).

President Trump and his fellow Republicans were desperate to pass a tax bill by Christmas but seem unconcerned about the more urgent and important work of making sure children can get the health care they need. That will be quite a legacy.

Estimates are that about nine million kids depend on CHIP for health care.

Senator Moynihan’s final word: “No child in America asked to be here.  Why, then are we determined to punish them?”  —RONALD FRASER

Ronald Fraser, a former land use planner, lives in the Town of Colden.

As an American whose grandfather fought in World War I, and whose father fought in World War II, I take offense at the behavior of our elected officials in Washington. The elected officials talk about deficits, and how Social Security is underfunded. They never provide any solutions to the problems. The only answer they give us is: “We are going to make cuts to the program.” We, the average American wage earners, fund this program. This program supports Americans whose parents, brothers, and sisters have paid into the system for years and years. The politicians have recently released a “Great Tax Cut” that they claim will create jobs and lift many of us out of poverty. I read about the tax cut, and I see things that I do not agree with. The tax cut takes away many deductions that we all benefit from, and depend upon. My father was a columnist for a now defunct newspaper, the Buffalo Courier Express. Back in the 1970s, when Buffalo was deciding on what type of stadium to build and where to build it, my father beat the drum for a domed sStadium in downtown Buffalo. He understood that building a stadium downtown would point Buffalo in the right direction after experiencing years of population decline. He wrote columns from a third-party point of view. He named one of his characters “Mr. Erie County.” My character, Mr. Taxpayer, has some interesting questions for our local politicians, you can fill in the blanks with the local politician’s name:

Mr. Taxpayer: Mr. Politician, I read about my tax cut in the newspaper, and also sat through a commercial on television telling me how great my tax cut will be. Why are you helping me so much with this tax cut?

Mr. Politician: Because I care about you and your family. You pay too much in taxes, Mr. Taxpayer.

Mr. Taxpayer: Mr. Politician, now that we are friends, let me tell you about my parents. My father fought in World War II as a Marine. He cared about others, so he joined the service, even though he had recently married my mother. He served for his country for three and a half years. When he passed away, he didn’t have much savings, although he did pay taxes his entire life. He couldn’t take advantage of the estate tax, because he spent all of his money on his family. Mr. Politician, my father and mother worked very hard, and they never received any money for free.

Mr. Politician, now that we are friends, could you please tell me how much money you received from your family that was untaxed? Oh, before you answer that question, I will tell you that in 45 years of working, I have paid quite a bit of tax on my meager earnings.

Mr. Politician: I really don’t want to tell you what I received in untaxed money or inheritance, or how much I’ve made…it’s too personal.

Mr. Taxpayer: Mr. Politician, I have heard you say derogatory things about needy people who receive government benefits. Do you think that large untaxed transfers of wealth help the economy and our great country? Do you think a worker should be taxed at a higher rate than someone who inherits huge estates (over $11.3 million)? And should a workingman or woman pay higher tax rates than somebody who lives off of dividends and doesn’t really “work” for their money?

Mr. Politician: I really don’t want to answer that question. I’m here to help you.

Mr. Taxpayer: Mr. Politician, do you really believe that factories will open again, with fair wages and benefits for unskilled labor?

Mr. Politician: I really don’t want to answer that question either.

Mr. Taxpayer: Mr. Politician, can you give the taxpayers a list of corporations that are on board to build new factories in the United States that feature good paying jobs, with health benefits and pensions?

Mr. Politician: Again, I don’t want to answer that question.

Mr. Taxpayer: Mr. Politician, I make about $60,000 a year, and according to the tax cut, I stand to receive an extra $25 per week in my paycheck. Can I see your tax returns for the last 5 years, so I can figure out how much you will save in taxes? Mr. Politician, I know you won’t show me your tax returns, but I made a decision anyways. I don’t want your tax cut. I would like the government to keep my $25 per week, and use it to repair the roads and help veterans who are in need. Mr. Politician, some of my working friends told me that your tax cut will drain the Treasury. As a true patriot, I don’t want a tax cut, because without that money, who will pay for the endless wars that many politicians promote?

Mr. Politician: This interview is over! You’re a wise guy!

Mr. Taxpayer: Mr. Politician, before you go, could I have a list of all of the politicians that voted for this tax cut, along with supporting documentation showing their net worth and income? Some guy in the donut shop told me that most politicians are millionaires, and the tax cut will benefit them the most. That guy also told me that he thinks the tax system is rigged against the average guy, and that none of the average guys are in politics. He said most politicians are millionaires, and they don’t represent him. He wants the American people to vote on such a large tax cut, not millionaire politicians.

My father, Phil Ranallo, a.k.a. “Mr. Taxpayer,” would take a drag on his Lucky Strike cigarette and say, “There goes another empty suit” as the politician walked away.

Paul Ranallo lives in Amherst and is the author of What’s New, Harry?, a collection of his father Phil Ranallo’s columns from the Buffalo Courier-Express.